Looking for the perfect match

While her friends pretended to be teachers or doctors, Ohood Alshareef preferred to line up empty pill bottles and play pharmacist. 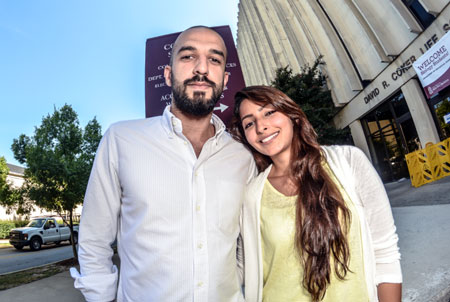 Omar Jamjoom and his wife, Ohood Alshareef, are finishing their studies at the College of Pharmacy at UofSC and looking for residences in the U.S.

Her childhood dream came true when she graduated from pharmacy school in Saudi Arabia, but now the fourth-year Pharm.D. student hopes to reach a new milestone in her pharmacy career: acceptance into a hospital-based post-graduate pharmacy practice residency program.

For Alshareef and her husband, Omar Jamjoom, completing an American Society of Health-System Pharmacists-accredited residency program has been their end goal since they applied to the College of Pharmacy. The fourth-year students received a scholarship from The Saudi Arabia National Guard Health Affairs (NGHA) as part of a collaborative effort coordinated by the American College of Clinical Pharmacy (ACCP) to receive training from a US doctor of pharmacy program. In May, they will be the first graduates of the exchange program to earn a Pharm.D. from the College of Pharmacy at the University of South Carolina.

Alshareef and Jamjoom, who previously graduated from pharmacy school in the United Kingdom, plan to complete a residency and return to work as pharmacists at the hospital in Jeddah, Saudi Arabia, to help advance its clinical pharmaceutical services and residency training programs.

Alshareef is excited to learn where they will land next but said she plans to take a low-key approach to Match Day, going to work and trying not to constantly check her email for her match result.

“We had eight or nine interviews each, and they went well,” Jamjoom said. “I’m pretty optimistic.”

About 30 College of Pharmacy students are participating in this year’s match, and the college will celebrate their placements on Twitter (Follow along at #SCCPUSCMatch2017).

Carolina pharmacy students consistently place in residency programs at a higher rate than the national average; for the past five years, 83 percent of the university’s students who applied to a residency program were accepted compared with 64 percent nationwide. The college offers a residency track, with guidance about specific courses, clinical rotations and research opportunities designed to enhance students’ preparation and competitiveness in the match.

“We are very proud of our students’ preparation and strong desire to further their training through post-graduate residencies and fellowships,” said associate professor Brandon Bookstaver, the college’s director of residency and fellowship training. “I’m excited for Omar and Ohood taking this next step in their pharmacy careers. They have really embraced our roadmap to post-graduate training and mentoring concept we try to convey to our students.”

The practical training here is intense ... it really prepares you well to be a pharmacist when you graduate.

After exploring options across the country, Alshareef and Jamjoom narrowed their focus to residency programs in Boston, Chicago and Tucson, Ariz., and spent the month of February traveling for interviews. Ranking programs can be nerve-racking for any student, but for Jamjoom and Alshareef, the process was an exercise in communication and negotiation because they applied for a couple’s match.

With a couple’s match, each applicant’s program ranking is tied to a corresponding program ranking from their spouse. Jamjoom and Alshareef decided to limit each coupled ranking to programs within the same city so that they will not be apart and sorting out the logistics of the match rankings took several days.

“Our first choice was the easiest because we both had our first choice in Boston,” Jamjoom said. “It was the sort of middle choices that were harder. There was a lot of compromising.”

The students said they were well prepared for the residency application process and were impressed with the Pharm.D. program’s broad knowledge base and diverse learning opportunities.

“The practical training here is intense,” Alshareef said. “You get exposed to all different areas of pharmacy. It really prepares you well to be a pharmacist when you graduate.”

For instance, while fourth-year students in the College of Pharmacy must take nine one-month rotations in a variety of health care settings, in the U.K., Jamjoom stayed at the same clinical site — a hospital for patients with neurodegenerative diseases — for an entire year and thus his practice experience was limited to that patient population.

In addition, the students were excited to be able to participate in research projects. Alshareef worked with assistant professor Christina Cox to explore thromboembolic risk in pediatric patients through an independent study. Jamjoom completed a project with assistant professor Julie Justo and Bookstaver about treatment of drug-resistant bacteria that he presented at the ACCP conference in October as well as a project with associate professor Whitney Maxwell about interprofessional interaction in experiential education that he presented at the South Carolina Society of Health-System Pharmacists meeting in March.

The students said they enjoyed living in Columbia, trying different restaurants, camping on Lake Murray and, for Jamjoom, playing soccer in the Columbia Central League.

Although their days in the capital city are numbered, the pair said they won’t forget the Southern hospitality that made them feel welcome from the start.

“When I first came here, I felt like people were mistaking me for someone else because they wouldn’t just nod, they’d say, ‘Hey, how are you doing?’ … and it’s like they know you,” Alshareef said. “It’s nice. Everyone is smiling.