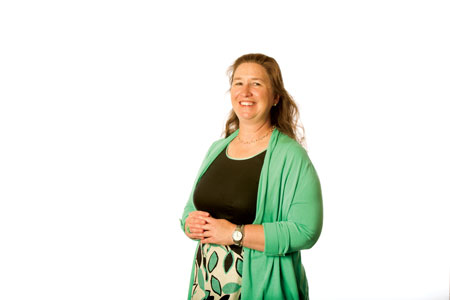 If you want to break down the traditional classroom wall, look no further than public history, a discipline with one foot outside the academy already. Ask Allison Marsh, director of the University of South Carolina’s public history program, whose forays into the virtual world bring an added dimension to online learning and whose real world “classroom” stretches from the Carolina campus to Guantanamo Bay, Cuba.

And on the first count — online education — the 2016 winner of a Garnet Apple Award for Teaching Innovation considers herself a recent convert.

“There’s been a big push to experiment with classes online, but there’s also been a great deal of questions about the effectiveness of online learning,” says Marsh. “I went in a little bit of a skeptic — I was neither pro nor con — but the question was can a history department have substantial learning in such a traditional subject? The answer is absolutely yes.”

Consider History 478: “Material Culture in a Digital Age,” a course Marsh developed following a fellowship at the Smithsonian Institute in the spring of 2013 where she had conversations with curators, social media strategists and a range of other stakeholders about the effectiveness of the renowned museum’s efforts to create an educational online experience.

“Smithsonian has been digitizing their collections for at least 20 years, but they weren’t necessarily sure how people were using their online collections and what the experience is like for the end user,” Marsh explains. “‘If they’re not visiting the museum, what are they accessing?’ That was the question.”

For answers, she looked to her own students. “I figured, ‘Hey, I can test all that,’ she says. “So I designed my course around all the digital initiatives that the Smithsonian has been trying.”

Marsh’s students analyzed their experiences using content already on the Smithsonian website, including video, photos, even 3D images that can be manipulated by the user to view an item from multiple perspectives.

Two separate 3D images of Abraham Lincoln life masks made at different points during his presidency, for example, show the deepening of wrinkles in Lincoln’s face during a tumultuous era of American history. But is the ability to manipulate an online image necessarily worth the cost of producing it? Also, how does looking at the 3D re-creation of an item differ from seeing the actual item in person, in a museum?

“I fed my students’ answers back to the Smithsonian so they can better understand how millennials actually learn,” says Marsh. “The course itself became a research project about online learning, about how my department can create online classes that challenge them to think but also how we can help the Smithsonian think about how to change their digitization projects.”

But Marsh is hardly swapping the real for the virtual. In fact, in 2015 her endeavors in experiential learning led one class to a very real place with very real cultural and political significance that few students, or even academics, have ever visited — Guantanamo Bay.

During spring break that year, Marsh took a group of graduate students to the U.S. military base in Cuba, a site best known as the home of a detention center for terrorism suspects since 9/11. Her project’s goal? To supplement work already conducted through the Guantanamo Public Memory Project by the International Coalition for Sites of Conscience, a consortium of 12 universities.

While the detention center, the detainees and the people who work directly with them were off limits to Marsh’s class, her students were able to conduct approximately 50 interviews with members of the military, their dependents, government contractors, foreign nationals who live on the base, even a Girl Scout troop about life in a place few people on the outside truly understand.

“The idea of the Guantanamo Public Memory Project is to give the long history of Gitmo, so people understand it’s not just a post-9/11 detention center,” says Marsh. “They want to unpack the politics of the place and show how the U.S. has had a presence in Cuba since the late 19th century, not just the last decade.”

It’s the kind of beyond-the-classroom educational opportunity that provides more than a mere history lesson.

“At the end, it was a transformative experience for the students — and I do not use that word lightly,” Marsh says. “They had to question their own assumptions and preconceptions multiple times a day. It wasn’t that they were suddenly changing their minds to say ‘GITMO should be closed’ or ‘GITMO should remain open.’ They became much more conflicted as they discovered that things aren’t so black and white as they might have thought. Well, that’s what learning looks like.”