The road to the academy

For the past 11 years, Ari Streisfeld has played violin in the JACK Quartet, which has been praised by The Washington Post as “the go-to quartet for contemporary music” and by The Boston Globe as “superheroes of the new music world.” The quartet has performed at Carnegie Hall, the Lincoln Center and on stages throughout the world; it even won a national award for adventurous programming. 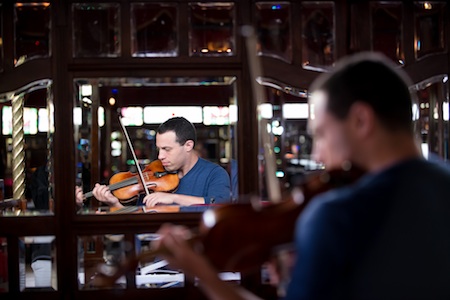 Violinist Ari Streisfeld has played Carnegie Hall, the Lincoln Center and on stages throughout the world. Now he's trading the touring life for a teaching position at the University of South Carolina.

Now, Streisfeld is on to the next chapter — as assistant professor of violin and violin pedagogy in the University of South Carolina School of Music. It’s a big change from life on the road, and one that Streisfeld is excited about. In fact, it’s a return to his original plan.

The JACK Quartet started out slowly in 2005, he explains, while Streisfeld was pursuing his master’s degree at Northwestern University. By 2007, however, when he was working on his doctorate at Boston University, the group was starting to take off. As the quartet’s tour schedule intensified, it became difficult to juggle concerts and coursework, but Streisfeld’s professors understood the pressures — and the value — of a highly acclaimed professional music career, and they worked with him throughout the process. Streisfeld speaks fondly of his years in the quartet — but he’s ready to move on.

“The rest of the group likes teaching, but they weren’t as into it as a full-time thing,” says Streisfeld, who recently moved from New York City along with his wife, mezzo-soprano Rachel Calloway, who’s also teaching in the School of Music. “I have always liked the idea of teaching, and teaching at a high level. My goal as a teacher is mainly to get the students to teach themselves — because once they get out into the real world and they don’t have a teacher there all the time, if they suddenly have a technical issue, they need to be able to figure out what they are doing wrong.”

Streisfeld’s experience will be invaluable to his students. He has been playing violin since he was 6, studied with top teachers, has an acclaimed career as a chamber musician and has already been teaching for years in New York City. He incorporates several pedagogical philosophies into his teaching, but as a musician who has focused primarily on a contemporary repertoire, one of his goals is to incorporate nontraditional performance methods into the teaching regimen.

“The capabilities of the instrument go so far beyond what is normally considered proper technique,” Streisfeld says. Exploring those capabilities, he says, “opens up one’s mind to the possibilities of sound.”

Though he’s no longer in the JACK Quartet, Streisfeld still has goals as a performer.

“I want to establish myself as more of a soloist and chamber musician outside of JACK,” he says. “I want to be known as someone who can do it all — who can play really avant-garde contemporary music and has a great understanding of extended techniques, but who can also play Brahms.”

As part of his position at the School of Music, Streisfeld is starting a master’s program in violin pedagogy. The program is geared primarily toward students who want careers as teachers. Over time, Streisfeld hopes to bring in more of a performance component, too.

“This is the job I wanted,” he says. “This is the one I was most interested in, not only because I knew the school and had been here. I knew the level was very high, the faculty was very forward thinking and really exciting. Also, the position itself was really intriguing. While I am not known for pedagogy per se yet, it’s something I have studied a lot and am very interested in. So, out of all the positions I applied to, this is the one where I really saw the opportunity to dive deep into that side of violin playing.”

The world-class faculty at our music school will help you turn your passion into your life’s work by preparing you for professional careers and leadership in music teaching, performance and composition.