In addition to creating an innovative comparative literature class together, there’s something else Lara Ducate and Judith Kalb have in common: Both wanted to be teachers from the time they were small children. 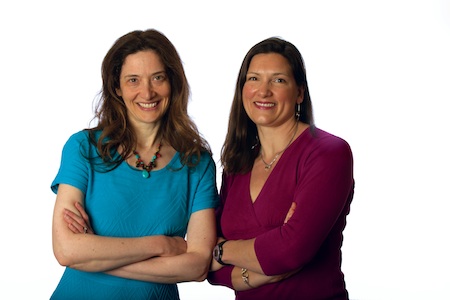 Judith Kalb (left) and Lara Ducate, associate professors in the Department of Languages, Literatures and Cultures, are inaugural winners of the Garnet Apple Award in part for their work on Comparative Literature 150, an online-only course on values and ethics in literature.

Sponsored by the Office of the Provost and the Center for Teaching Excellence, the Garnet Apple recognizes faculty members who have demonstrated an ongoing commitment to best teaching practices and a proven record of developing innovative teaching approaches.

“I always wanted to teach when I was a little girl; I always liked to play school,” Ducate recalls. “I don’t remember ever having a different plan.”

For Kalb, too, the desire to teach goes back “as far as I can remember,” she says. “One of my first memories is nursery school, teaching another kid how to tie his shoes; someone had been making fun of him because he didn’t know how. And it was this awesome feeling; his face just lit up.”

Together, with help from a grant from the Office of the Provost, they developed Comparative Literature 150, an online-only course on values and ethics in literature that found both professors stepping into new educational territory. For their efforts, Ducate and Kalb have been awarded a Garnet Apple Award for Teaching Innovation.

Students in CPLT 150, which is taught by Kalb, explore ethical themes in works from numerous literary traditions — among them Russian, American, Irish and Chinese — and react to the material not only through analysis and critique, but also through personal blog entries in which they connect the class readings to their own experiences.

It all started when Kalb went to a session about the Carolina Core. She began to think about how a course combining literature and ethics could satisfy two core requirements at once — Aesthetic and Interpretive Understanding (AIU) and Values, Ethics and Social Responsibility (VSR).

“I’m such a weird little advising nerd, but I got transfixed by this,” Kalb jokes.

Russian literature seemed like a perfect place to start, she says, because “Russian literature is all about how you live your life.” But she soon realized that incorporating other literary traditions into the course could broaden its appeal. And, though she considers herself an unlikely proponent of online learning, she decided to give it a try.

“You kind of make a list of people who would do an online course, and really I wouldn’t be on it,” Kalb says. But she also has come to appreciate how valuable such a course can be — especially for nontraditional students.

Ducate, on the other hand, has a background in pedagogy and the use of technology in the classroom — which is exactly why Kalb sought her out as a partner. While Kalb focused on choosing the literature and developing the lectures, Ducate helped drive the online components.

With Kalb’s passion for literature and Ducate’s expertise in pedagogy and technology, it all came together in CPLT 150. The result is the only AIU overlay course at the university and the only course to satisfy both the AIU and VSR components of the Carolina Core.

“I think it was a great meshing of our disciplines and expertise,” Ducate says.