Brains on the brain 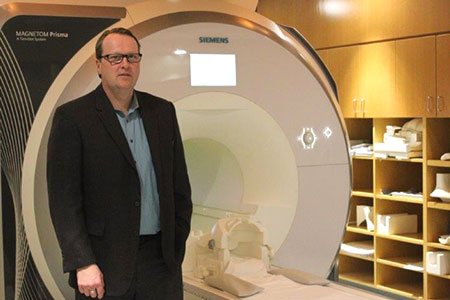 Julius Fridriksson, director of the University of South Carolina’s Aphasia Laboratory and SmartState Endowed Chair of Memory and Brain Function

Some nights, Julius Fridriksson lies awake just thinking about his research — but losing a little sleep doesn’t really faze him. For a researcher charged with overseeing a large team, a larger lab, multiple patient studies and millions of dollars in federal grants, those solitary midnight hours provide fresh perspectives.

“I actually cherish those moments,” says Fridriksson, who directs the University of South Carolina’s Aphasia Laboratory and was named the SmartState Endowed Chair of Memory and Brain Function in May. “A lot of people wake up and complain that they can’t stop thinking about work. I actually like it. It’s personal time to reflect.”

And these days, Fridriksson has a lot on which to reflect. His lab, which is housed within the Department of Communication Sciences and Disorders at the Arnold School of Public Health, is home to some of the most ambitious clinical studies to-date on aphasia, a communication disorder caused by damage to the left hemisphere of the brain, typically as a result of stroke.

The disorder affects approximately 1 million people in the United States, according to the National Institute on Neurological Disorders and Stroke, and incidence is even higher in South Carolina, which is part of the so-called Stroke Belt.

But while the need for more effective therapy and more accurate prognoses is high, Fridriksson says progress has been relatively slow. That’s partly because of the complicated nature of the brain and partly because language processing is itself such a complicated function. Moreover, while the location of a brain injury typically corresponds to particular types of aphasia, small variations can result in radically different symptoms and not all patients respond to the same therapies.

The chief complaint that we get from people with aphasia is that they know what they want to say; they just can’t get the words out.

“Aphasia ranges from very mild — difficulty coming up with the right words, what you would call tip-of-the-tongue syndrome — to more severe forms where the person is almost mute and/or has a difficult time understanding other people when they speak,” Fridriksson explains.

Even in its mildest forms, aphasia is a devastating diagnosis, and the consequent frustration experienced by patients and their loved ones only compounds its impact on quality of life.

“The chief complaint that we get from people with aphasia is that they know what they want to say; they just can’t get the words out,” says Fridriksson. “A family member will say, ‘Well, he’s lost his memory.’ No, he can remember that this is a magazine or that’s a chair; he just can’t remember the word for magazine or for chair. In most people those words are still intact, the person just cannot pull them out.” 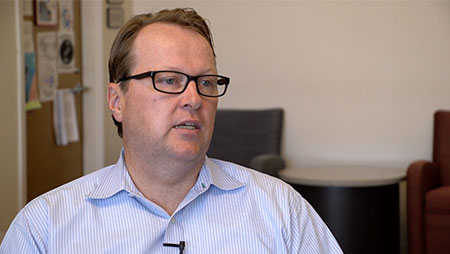 Fridriksson has been landing grants for aphasia research since he arrived at Carolina in 2001, but an $11.1 million research grant from the National Institutes for Health awarded earlier this year promises to push his team’s research to the next level.

In addition to funding related projects at Johns Hopkins University, the University of California Irvine and MUSC, the grant will enable the expansion of several promising pilot studies started in Fridriksson’s lab, including two that were published in the journal Stroke in 2010 and 2011.

“My main project here at USC is focused on chronic patients who had a stroke a year ago, or even longer,” says Fridriksson. “We do a very intensive work up, look at all aspects of their brain structure and function, and use both behavioral data and brain imaging data to predict outcome.”

Fridriksson can’t do all that alone, of course, and is backed by a team that includes SmartState Endowed Chair of neuroimaging Chris Rorden and School of Medicine neurology chair Souvik Sen, as well as MUSC neurologist Leo Bonilha.

Initially, Sen sees each patient who enters the study and conducts the neurological work; Rorden oversees the brain scans at the McCausland Center for Brain Imaging at Palmetto Health Richland and uses machine learning technology to predict the relative effectiveness of various therapies based on the type, location and severity of brain injury.

The hope is not just to understand more about the brain and about aphasia, but to better target aphasia therapy for patients whose brain scans indicate a chance for some degree of recovery.

Testing and therapy is intense, lasting about eight weeks for each enrollee. Over the next five years, the study will involve approximately 150 patients. “And that’s a very large patient sample when it comes to aphasia treatment studies,” Fridriksson says. “Most are in single digits when it comes to number of patients enrolled.”

There are multiple approaches to the treatment of aphasia, but one of the most promising involves the use of targeted electrical stimulation to the brain’s left hemisphere in an effort to enhance therapeutic retraining of uninjured tissue.

It’s complicated stuff, to be sure, but the basic premise is fairly simple: engage a patient in a language task and see which parts of their brain become activated, even as the patient struggles with the task. Those areas of the left hemisphere that receive a sudden influx of blood following the patient’s attempts represent areas that could potentially be retrained to take over language tasks performed by other areas prior to injury.

“What are the parts of the brain that take over the functions of the parts that were lost?” Fridriksson’s asks. “This is something that has been debated for about 150 years, since that first case described speech impairment as related to left frontal lobe damage. Some people think that the right hemisphere takes over for the function that was lost. We think that it’s the residual areas of the left hemisphere that have to be retrained.”

But to locate those areas, you first need good pictures. You also need someone to take those pictures, interpret them and analyze what collectively amounts to millions of data points.

Enter Rorden, a Cambridge-educated neuropsychologist who spent the first part of his career studying the effects of injury on the brain’s right hemisphere and a disorder known as neglect, which relates to spatial perception. Early on, he also had the good fortune to be at the University of Nottingham when Sir Peter Mansfield received the Nobel Prize for echo-planar imaging, and so got first-hand experience with the world’s first 3 Tesla MRI scanner, which Mansfield and his colleagues built.

“It allows you to see a 2-D slice of the brain almost instantaneously,” he says. “We could now see the brain really quickly. Where it used to take us eight minutes to take a picture of the brain, we were seeing the whole brain every three seconds. It was a dramatic revolutionary advance.”

When he met Fridriksson, though, the right brain expert quite literally switched sides — at least for the aphasia project. “In one sense, I can help Julius take really good pictures of the brain, and help him understand what those pictures say to decide if brain stimulation can perhaps aid in recovery,” he says. “As a psychologist, I can also help him tweak his therapies.”

But that’s not the limit of Rorden’s contribution. In addition to his facility with MRI, Rorden is also well-versed in machine language and probability, which the team hopes can help them process data in much the same way that a search engine like Google does.

“We’ve been provided with these tools that are really impressive, but we can get inundated with data and still not quite know how to put it all together,” he says. “The idea is to train an algorithm on a very large number of data sets, find the patterns and try to work out why some people are getting better and other people aren’t. It’s a nice solution for something as complicated as the brain because we can look at lots of different areas simultaneously, and we can do a lot of things that humans can’t.”

Both Fridriksson and Rorden are quick to point out that not all aphasia patients can benefit from therapy. For those who likely won’t, however, there is at least the comfort of a more accurate prognosis.

“If you have some kind of catastrophic diagnosis, whether its stroke or heart disease or cancer, you want to know what the future holds,” says Fridriksson. “The decrease in quality of life is not just the event; it’s the uncertainty, the nagging feeling. Everybody is devastated when this first happens. I at least want to be able to give a good prognosis.”

But what about those patients who truly can benefit from targeted therapy?

The idea is to train an algorithm on a very large number of data sets, find the patterns and try to work out why some people are getting better and other people aren’t.

“We now understand that the brain is very plastic, that you can sometimes recover years after brain injury. That recovery never stops unless you start to become demented. That has changed our entire outlook.”