Traipsing around France for 10 days eating some of the best foods the Western world has to offer might strike some as more of a vacation than an academic endeavor. But in the Maymester course Delicious France, students combined pleasure with learning in an experience they’ll likely never forget. 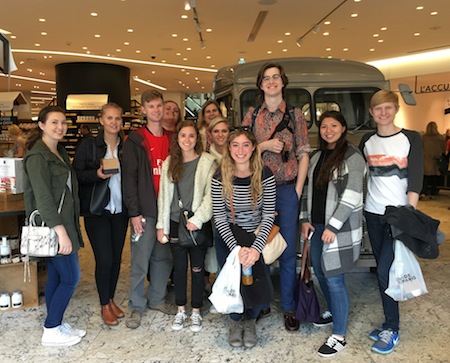 The class brought a group of two professors and nine students to Paris, where they learned firsthand from chocolatiers, restaurateurs, cheesemakers and butchers. The goal was to teach students not only about the regional cuisines of France, but also about the cultural significance that food has in French life. To reach that goal, the students did plenty of work before they ever boarded a plane or stepped into a Parisian brasserie. That included advance sessions learning about pastries, crepes, vinegar and olive oil — and, more specifically, learning about the complex systems by which French food artisans learn their trades.

“What we tried to do was target different concepts that are really essential to understanding French cuisine so that the students had some sort of knowledge ahead of time about what we were going to do,” says Amanda Dalola, an assistant professor of French and linguistics who led the course. “Otherwise, we would just sort of be taking them to France and saying, ‘Here’s what it is.’”

The idea for the course originated with a summer program in France that Dalola was involved with while doing her graduate work at the University of Texas-Austin. “While I was there, one of my jobs was to find things for the students to do during their free time,” Dalola recalls. “So I started visiting local artisans — cheesemakers, chocolate makers — to see if they would be interested in talking about their production process and their accreditation processes.” The experience led Dalola to think about how she might develop a full-fledged gastronomy course. 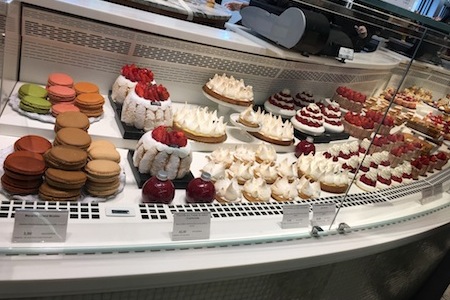 Now at the University of South Carolina, where she just completed her second year, Dalola pitched the idea to her colleagues, one of whom was Lara Lomicka Anderson, professor of French and applied linguistics and graduate director of the languages, literatures and cultures department. Anderson and others loved the idea.

“The French department had never offered a course on food and cuisine, as far as I know, and I have been here for 16 years,” Anderson says. “It seemed like something that would be very attractive to people.”

Dalola and Anderson then applied for and received an integrative learning grant from the Center for Teaching Excellence. Next came a partnership with the Honors College, which made the course one of its featured offerings.

For students, it was an extraordinary opportunity to learn on several different levels — about food, but also about language, culture and history. Though the group stayed in and around Paris, they explored the cuisine of many different regions of the country. They woke up at 4:30 a.m. to go to the Rungis International Market, the largest wholesale food market in the world. They had themed dinners based on the cuisine from Alsace and the Rhone Valley, among others.

“Then on our last night — it was kind of the quintessential Parisian night — we took them to this brasserie, Deux Magots,” Dalola says, noting the spot’s venerable place in 20th-century literary and intellectual history. Among Deux Magots’ patrons have been Simone de Beavoir, Jean-Paul Sartre, Albert Camus, Pablo Picasso and James Joyce. The students had studied its cultural significance beforehand, making the visit all the more poignant. 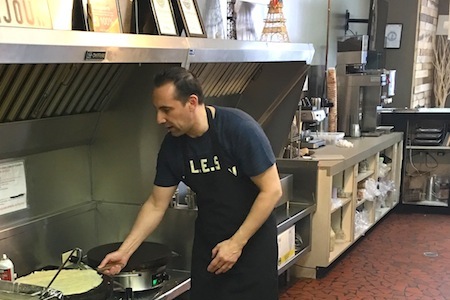 While still in Columbia, students met with local experts on French food and culture, including Laurent Prescelti at Crepes & Croissants.

Delicious France was offered in four different sections. Students could take it through either the Honors College or the French department, with the option of doing some assignments — including blogs and an audiovisual slideshow — in French or English. They needed to have the equivalent of at least two semesters of French as a prerequisite.

The textbook for the class, “À Table: The Gourmet Culture of France,” was in French with some English footnotes. “They would have an excerpt they had to read, and we would give them a translation if they were not taking the course in French,” Dalola explains.

Once they were actually in Paris, Dalola and Anderson made sure students were fully engaged regardless of how well they knew the language.

“There were a couple of occasions where we had the tour guide speak in English if it was something super technical — like when we were at the wine museum, and they talked about ancient wine production and the tools,” Dalola says. “We didn’t feel like the students would get as much out of it if they were constantly hanging on the language.”

Some of the tour guides “would do half French, half English,” Anderson adds, “so the students with us who had maybe two semesters of French could follow it, not just be drifting away somewhere.” 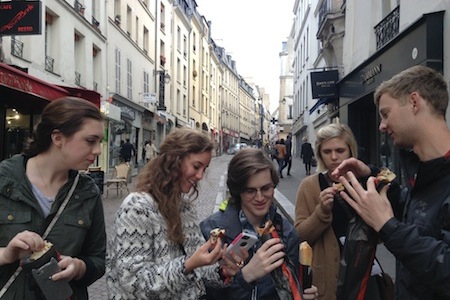 Regardless of their level of French and their previous experience in the country, the students were all exposed to new ways of thinking about food and culture.

“Paris has taught me two very important lessons — the first being ‘know your food,’ ” student Meccay Nimmer wrote in her course blog. “In America, I have the habit of rushing through my day and never enjoying what I eat.”

The second lesson, Nimmer wrote, is “know your neighbor.” In Paris, she wrote, people “have come to cherish the tradition of knowing their neighbor … they bond with their butcher, baker, grocer, waiter, food vendors and more.”

Through the Delicious France course, students bonded with their professors and fellow students, too.

“Being with eight other Gamecocks and two amazing professors, none of us really knew each other too well,” student Ross Hobson reflected in his VoiceThread audio assignment. “But by the end, I’d say we were good friends.”