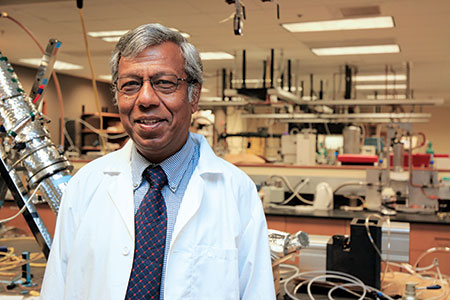 Jamil Khan joined the faculty of the College of Engineering and Computing in 1990, founding the Enhanced Heat Transfer Laboratory.

The world is replete with technology, and every bit of it has a common enemy: heat. If too much builds up in a power turbine blade, radar array or smartphone, materials can fail, often irreversibly. And heat buildup often increases with the sophistication of the device.

Computer chips, for example, have been getting more complex for decades, with the number of transistors that can fit on a chip approximately doubling via miniaturization every couple of years. But having more transistors crammed into the same amount of space causes more heat to dissipate within that space.

Enter Jamil Khan, a professor of mechanical engineering in the College of Engineering and Computing, who founded the Enhanced Heat Transfer Laboratory when he arrived at USC in 1990.

“The mission of the lab is to increase the rate of heat transfer,” Khan says. “That will allow engineers to design cooler [computer] chips that will run at a higher heat flux. It's a big challenge.”

Over the past 25 years, Khan and his colleagues have used three primary techniques to engineer enhanced heat transfer. The first is simple air cooling, in which a current of air moves heat from one place to another. The second, liquid cooling, is essentially the same process, but uses liquid, which typically has a much larger capacity for removing heat.

The third is what's called two-phase cooling. This method takes liquid cooling and adds even more capacity to it by allowing the liquid to boil. All of the energy required to make the liquid boil is added heat capacity for the entire heat transfer system. It’s a means by which heat from a nuclear core is transferred to coolants to generate the superheated steam, which generates power in a steam turbine.

When a liquid flows over a surface that is meant to be cooled, there is a very narrow zone where the surface and the liquid are truly in contact. The goal, says Khan, is to maximize contact.

Creating turbulence in the liquid at the solid-liquid interface increases mixing that will transfer heat from the hot surface to the cooler liquid. Studying microchannels and their augmentation with microscale — and even nanoscale — surface enhancements, Khan’s team has developed a range of methods for enhancing heat transfer from advanced, high-performance, high-temperature computer chips.

They’ve also taken that principle a step further, moving from the surface and into the liquid to create turbulence. By suspending nanoparticles uniformly within the liquid through the use of a surfactant, the team has increased the rate of heat transfer from a liquid to a surface at very low concentrations of nanoparticles — just 0.5 percent in some cases.

The underlying mechanism causing the increase in heat transfer is an active area of research, and the method is robust enough to be the basis of a commercial enterprise, Ice Dragon Cooling, that was co-founded in 2010 by two Enhanced Heat Transfer Laboratory alumni, Dale McCants and Andrew Hayes. The company earned a $50,000 S.C. Launch startup grant and is currently generating revenue with sales to high-performance computer gamers. Check out an earlier story about their success.

Khan’s laboratory has applied its heat transfer expertise to the nuclear industry as well. Working with funding agents including Westinghouse, the Savannah River Site, General Electric and several government laboratories, the team has developed methods to roughen surfaces to increase the rate of heat transfer between nuclear fuel rods and the water that is used to convert, via a steam turbine, the heat they produce into electrical power. The technology is the subject of an issued patent, Khan says.

Looking to the future, Khan is working closely with colleague Chen Li (some of his other work is highlighted here) on a project meant to protect an important natural resource.

“There is currently a big focus on food, water and energy. Water is the next precious substance that we will face a crisis with,” Khan says. “And power plants use a lot of water to cool the power plant, so we are studying ways we can cool large power plants without using water.”

“To give you the big picture, about 50 percent of fresh water is used to cool power plants,” Li adds. “That is too much.”

The use of water by a nuclear power plant is fairly obvious to a passerby. Vapor rising from the cooling towers is the result of efforts to cool water from the turbines. But that’s just a drop in the bucket when it comes to water use in nuclear power plants, which are always located next to natural bodies of water. Enormous quantities of water are pumped into the plant and used to cool the turbines. Water warmed by the process is routinely pumped back into the natural water source.

And nuclear power plants are not alone in their thirst. Coal- and natural-gas-fired power plants use just as much water as their nuclear brethren. The process of converting heat energy efficiently to electrical power generates a huge amount of waste heat.

“For every watt of power produced, a power plant generates more than one watt of waste heat,” Khan says. “So for, say, a 1000-MW power plant, you have to cool more than 1000 MW.”

Li and Khan are working on designs that would make more air cooling possible in large power plants.

It’s essentially a reversal of the traditional evolution of heat transfer engineering. Historically, air cooling is generally supplanted by liquid cooling because the latter is much more efficient, requiring a smaller apparatus to transfer the same quantity of heat. But with more awareness of the consequences of waste heat being released into rivers and lakes and the long-range goal of reducing the prodigious water use by steam turbines, it’s the wave of the future.

Khan’s laboratory also applied some of the principles central to the Enhanced Heat Transfer Laboratory to a multiyear collaboration with the Arnold School of Public Health. Working with Gene Feigley, a professor in the Department of Environmental Health Sciences, the team studied how a contaminant, such as formaldehyde from a cadaver, would distribute itself within a room or between rooms in an industrial setting.

“It’s a conjugate heat transfer and fluid mechanics problem,” Khan says of the work, which was funded in part by the National Institute for Occupational Safety and Health. “Our group was the first to bring computational fluid dynamics software into the public health setting.”