When neuroscientist Jim Augustine first asked artist Dawn Hunter to help out with some drawings in his neuroanatomy textbook, she said no. Eventually, though, she said yes — and that decision not only helped Augustine with his textbook, a revised edition of "Human Neuroanatomy," but also led Hunter to a completely new artistic direction inspired by the 19th-century Spanish neuroscientist Santiago Ramón y Cajal.

Hunter’s openness to collaborating with Augustine came after she stumbled upon a neuroscience article that piqued her curiosity. 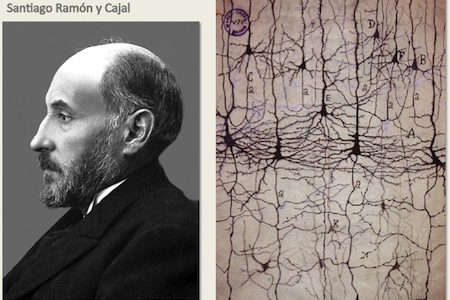 “I was on sabbatical in 2012 and I just happened to read an article on the claustrum,” recalls Hunter, an associate professor of studio art in the School of Visual Art and Design, referring to a small, thin mass of gray matter in the brain. “What scientists recently have realized is that it actually performs a function in your brain,” Hunter says of a structure that was first identified in the 18th century but whose function — one hypothesis is that it plays a role in consciousness — has long been unclear. “I found that fascinating.”

On the same day she came across the article, Hunter got an email from Augustine, an associate professor in the School of Medicine, asking for help with illustrations in his textbook.

“I had told him no previously a couple times because I didn’t think I was the right person,” she recalls. “I kept referring him to people I knew who did medical illustrations and said, ‘No, this is who you want.’”

But this time was different; the article she’d been reading had drawn her in.

“It’s a serious neuroscience article, and I don’t have a background in that, so I am going back and forth on Google looking up these terms, trying to follow it,” Hunter says. “Then in the image cache, Cajal’s drawings came up — and I was just completely drawn in because I could see certain qualities in the drawings. I could see a particular type of observation that was going on, and I thought the drawings had a lot of artistic merit on their own.”

Since then, Hunter’s work has taken a completely new turn. Where her art once focused on representations of gender in mass media, now she is digging deep into Cajal — as an important historical figure in science, a complicated individual and a highly talented artist. She began making paintings that illuminate themes from Cajal’s life; more recently, she has studied his drawings and worked to recreate them. 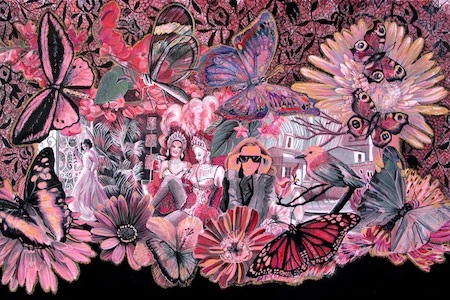 Born in 1852 in Navarre, Spain, Cajal was trained in medicine and physiology. He is best known for his work on the structure of the brain; he was awarded the Nobel Prize in 1906 along with Camillo Golgi, an Italian rival.

Golgi believed that nerve cells are physically joined together to form a diffuse network. Cajal argued that neurons are independent of one another. As it turned out, Cajal was right. And the invention of the microscope and the development of histological staining made it possible for Cajal to prove his point.

Cajal used Golgi’s stain — a technique used to illuminate nervous tissue under a microscope — to prove that neurons were individual units, whereas Golgi was using the same technique to try to prove the opposite.

“Cajal took a method someone else developed and began to see the nervous system in a new light,” Augustine says. “It was a whole new way of looking at it. Cajal’s studies and his illustrations were transformational; he clearly established the modern principle often termed the Neuron Doctrine that now underlies how we now look at the organization of the nervous system.”

There’s quite a bit known about Cajal and his contributions already: He wrote three autobiographies, and he’s practically a household name in Spain, where there once was a TV miniseries based on his life. But Hunter’s artwork, along with a presentation she gave last fall at the National Institutes of Health, are helping to expand conceptions about the scientist.

Hunter became frustrated, she says, “because there’s a lot of material about Cajal on the web, but a lot of it is just the same information — people saying similar things.” Hunter wants people to know more — like how Cajal suffered abuse at boarding schools and how that might have influenced him; and, perhaps most importantly, about how his drawings did more than illuminate the structure of the brain, but are also worthy of praise for their artistic qualities. 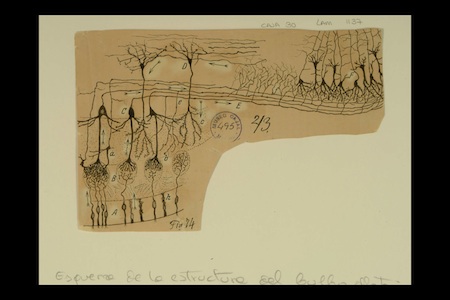 Hunter traces some of Cajal’s key traits — like his championing of the individual, as well as the individual neuron, and his intense, almost ritualistic ability to focus on his drawings — to his early childhood experiences. She believes that trauma Cajal experienced at an early age helped develop resilience in his character.

“One of the things he talks about in his biography is taking baby birds out of their nest and raising them and putting them back into their nest,” Hunter says. “And as I’m reading that I’m thinking, ‘Wow, this guy was abused.’ It really struck me; that was just my intuitive feeling with reading it. And then I got my answer later on in the book — yeah, he was, at boarding school. The discipline was severe beating, starvation; sometimes they would lock kids in a box. He was actually jailed at one point. I felt confident in my perception of him because I used to teach at a boys’ home, a lockdown facility. So it’s sort of like I was primed for seeing it like that.”

As a result of her interest in Cajal, Hunter was invited not only to address a conference of neuroscientists last fall, but also to show some of her paintings alongside the scientific drawings of Cajal at the NIH’s John Edward Porter Neuroscience Research Center in Bethesda, Maryland, in an ongoing exhibition curated by NIH neuroscientist Jeffrey Diamond. By this point, she was already fully steeped in studying Cajal’s life and portraying themes from it in her work. But at the NIH, Hunter got a chance to see Cajal’s drawings in person — and that led her to appreciate them even more.

“That’s when I realized he was drawing with a continuous line,” she says. “His drawings are so refined in person, they really rival the line quality of a Dürer print or a Rembrandt print. And it’s drawing, not even a print. It’s just so refined — and I was just shocked by that. I was like, ‘It’s so beautiful. I’m so inspired. I’m going to draw it.’ And when I started drawing it, it was just a whole new level of understanding him as a person.”

Augustine, who saw Hunter’s presentation at the NIH, says the audience was impressed. Among the attendees was Juan de Carlos, a neuroscientist and curator with the Cajal Institute in Madrid. 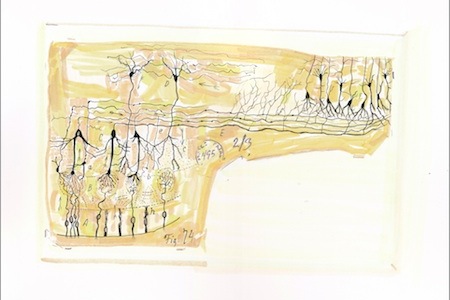 “All of the Cajal insiders from Spain and elsewhere were much taken by her and her thoughts about this,” Augustine says. “That artistic bent in Cajal underlies his studies of the nervous system because he was able to show what he was seeing to others — what his eye could see. Dawn understands that, and she began to understand him — an artist-to-artist understanding. That just drew her into studying him more and more and taking her own approach to drawing him and his life.”

After delving into the strengths of Cajal’s drawings more closely, Hunter became even more convinced that she was on the right path artistically.

“I realized that I was tapping into something that was unique, and I knew from my conversations with neuroscientists that other people hadn’t been looking at Cajal like that or his drawings like that,” she says. “Artistically, it becomes an opportunity for growth in terms of a mindset. I felt like just doing the drawings and studying them for their qualities themselves was important — and then for my own creative project, in understanding Cajal, it was also important.”

Hunter is quick to point out that she’s not a scientist, and she doesn’t know whether scientists would agree with her. But to her, there are clear parallels between an artist finding his or her path and a scientist doing the same.

“In my classes, sometimes I’ll get students that have a tremendous amount of talent but are kind of going through the motions,” she says. “They might be doing 'B' work, but they are capable of doing extraordinary things. I’ll say, ‘You know, it’s not like you just go along and do things in a certain style and all of a sudden boom, everything comes together. It comes together when you make it come together — when you reach out, you ask questions, you investigate your work.’ I think for real innovation to happen, that’s where it comes from.”