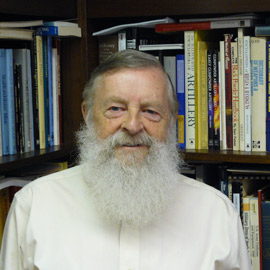 Chester DePratter — working originally with Carolina archaeologist Stanley South — has labored for decades to unearth and share the story of Santa Elena, a 16th-century Spanish settlement off the coast of South Carolina.

Did you know there’s a Spanish settlement off the coast of South Carolina?

If you answered “no,” you’re not alone — and University of South Carolina archaeologist Chester DePratter wants to change that.

Nearly 450 years after it was established, the Spanish settlement of Santa Elena — situated on Parris Island in Beaufort County and named a National Historic Landmark in 2001 — has yet to fully reveal its secrets. Scholars know when it was founded and that it was built by the Spanish to beat back French incursions into the New World; they have also unearthed thousands of artifacts at the site. But public awareness of the site remains limited, and relatively little is known about the actual layout of the settlement. Until 1957, it was widely believed to be French.

“It’s an important Spanish colonial site,” says DePratter, a research professor at the South Carolina Institute of Archaeology and Anthropology at UofSC. “It was established in 1566, only a year after St. Augustine, and it became the capital of Spanish Florida in 1571. It was the northernmost Spanish settlement. It was holding the frontier, essentially.”

Santa Elena survived just 21 years (with an Indian attack that briefly punctuated its existence), but during that time it was a major early European settlement — complete with a church, courts, shops and taverns, as well as farms and hundreds of residents.

DePratter — working originally with Carolina archaeologist Stanley South, who began excavation of the site in 1979 and died on March 20 at the age of 88 — has labored for decades to unearth and share the story of Santa Elena. Recently, his efforts have gotten a boost from the Santa Elena Foundation, a group that in just two years has launched the Santa Elena History Center in Beaufort and opens an exhibition curated by DePratter on April 30. Add in a major reprocessing of the site’s artifacts, an upcoming conference at USC Beaufort and, hopefully, remote sensing at the site, and it looks as if DePratter’s longstanding efforts are on the move.

On April 15 — DePratter’s best estimate as to the anniversary of the settlement’s founding — scholars will gather for a conference, “Santa Elena and Sixteenth-Century La Florida.”

“I invited all of the major historians and archaeologists that have published on Spanish Florida and the French in the past 50 years,” DePratter says. “They’re all friends of mine … and to a person, they all agreed to come.”

Among the conference presenters are James Legg, a historical archaeologist who has worked closely with DePratter on the Santa Elena site since 1993, and Lawrence Rowland, distinguished professor emeritus of history at USC Beaufort. Papers will range from the origins of the name Santa Elena to the expedition of Juan Pardo, who built a fort near Morganton, North Carolina, in 1566.

DePratter plans to collect the papers into a book that will shed light not only on Santa Elena, but also on Spain’s role in the New World. He also hopes the conference will spur historians and archaeologists to collaborate more closely. The conference, to be held at USC Beaufort’s Center for the Arts, is sponsored by the Santa Elena Foundation and the South Carolina Institute of Archaeology and Anthropology.

Meanwhile, efforts continue to interpret what’s already been found at Santa Elena — and to explore the site more fully. With funds provided by the General Assembly and the Marine Corps, researchers are currently reprocessing the site’s artifacts.

“You have this massive archeological collection accumulated since 1979 — those things need to be reprocessed, re-bagged, re-boxed and re-analyzed periodically because the containers tend to deteriorate and our knowledge of the site improves, so we can better understand what we’re looking at,” DePratter says. “It’s around 800 or 900 cubic feet of material in boxes. So for Santa Elena archaeology, things couldn’t be better.”

The next step, which DePratter hopes to begin in June or July, is remote sensing using radar and other technologies, which would allow DePratter to “map the town without disturbing the soil,” he says. DePratter is working on the project with Victor Thompson, director of the University of Georgia’s Center for Archaeological Sciences. First, though, he needs to get permission from the Marine Corps, where the settlement is located.

“We’ve figured out where the plaza was, part of the road system, where three of the forts are, and other things — a pottery kiln — but still, we don’t know the layout of the whole town,” he says. “It would be nice to have a map before we go down so we can target particular sections.”

Outside of scholarly and other limited circles, the existence of the settlement is still not widely known. It’s not that it’s never garnered attention — Santa Elena has been written about in The New York Times more than once, and thousands of people have toured the site — but moving from a splash of publicity to an enduring understanding of Santa Elena’s importance has proven to be a harder task.

“Even though it was the capital of Spanish Florida, it is not well known and not well recognized as being an important part of the history of Spanish Florida,” DePratter says. “Nobody really acknowledges that Santa Elena — for some part of its history — was way more important than St. Augustine. It was the capital. The governor’s family lived there. Major governmental functions occurred at Santa Elena at a time when St. Augustine was a military outpost with few settlers.”

Santa Elena and Sixteenth-Century La Florida
April 15: Center for the Arts, USC Beaufort
The one-day Santa Elena conference is free and open to the public. Preregistration is required. For more information or to register, visit the event's website.