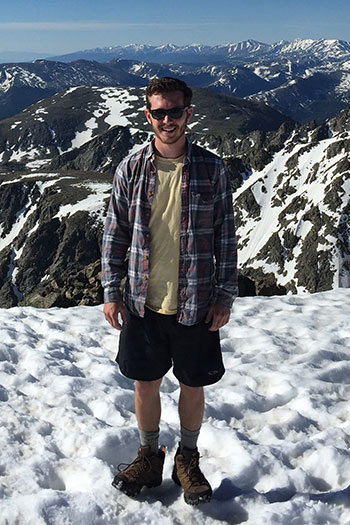 Senior marine science major Riley Brady will move on to graduate school at the University of Colorado-Boulder with a four-year Department of Energy Computational Science Graduate Fellowship.

Riley Brady will graduate in May as one of the most nationally decorated students on the commencement stage, having been named a Goldwater Scholar, a Hollings Scholar and most recently a recipient of a Department of Energy fellowship for graduate studies worth about $280,000.

But as successful as his resume shows him to be, he’s quick to point out that he experienced more rejections than acceptances when he was applying for outside scholarships and awards.

“That’s a big take-home from this,” says Brady, a McNair Scholar from Midlothian, Va. “I would encourage younger students to go after these big opportunities. I got rejected probably four times for every acceptance I got. People don’t see all of the rejection letters, which help you develop great skills just by applying. And they should always stay informed about the many opportunities out there so that they can hedge their bets — there is no single golden road, and sometimes you just have to adapt and let the path lay itself out.”

He has had no trouble staying informed about what was available because of the workshops the Office of Fellowships and Scholar Programs offers throughout the year, which highlight external programs open to competitive applications. There, he heard about the Goldwater and Hollings Scholars programs, and the OFSP team provided the coaching, resources and feedback to help him craft successful application packages.

The Hollings Scholarship, in particular, helped him build a solid framework for his future plans. The scholarship includes a summer internship between the junior and senior years, which Brady spent at the NOAA facility in the David Skaggs Research Center in Boulder, Colo. During the internship, he met Nikki Lovenduski of the University of Colorado-Boulder, and they decided that she should serve as his future graduate adviser. Identifying a thesis adviser early was highly advantageous, as they were then able to work together on the DOE fellowship proposal to fund his graduate education and research.

I would encourage younger students to go after these big opportunities. I got rejected probably four times for every acceptance I got.

The DOE Computational Science Graduate Fellowship had caught Brady’s eye in an Office of Fellowships and Scholar Programs workshop because of its focus on training scientists to harness supercomputers in applied fields. A marine science major who has worked with sophisticated computer models of climate systems in Ryan Rykaczewski’s lab since early in his freshman year, Brady was planning to enhance his mathematics, statistics and computational skills in graduate school, and the DOE fellowship will enable him to do just that.

It will also allow him to build on his work in Rykaczewski’s lab, where he has studied natural oceanic upwelling systems, which bring nutrients from deep waters to the surface near the coast.

“They occur on the eastern edge of big ocean basins,” Brady says. “As an example, there’s an upwelling system in California, Peru and Chile, and in Namibia and South Africa and the Canary Islands. They cover just 1 percent of the ocean’s surface, but we get 25 percent of our global fish catch from them, so it’s a big food security issue.”

Brady’s research is helping address one of the fundamental questions facing climate scientists as they try to make precise predictions of future changes that, as Rykaczewski’s lab has shown, can have large effects on fisheries and, consequently, on crucial food supplies.

For Brady, who arrived on campus with interests in math, physics and biology but little in the way of specific goals or career ideas, it has been a highly enjoyable process of focusing his scientific interests by casting a wide net.

“To me, grad school shouldn’t be the place where you go to figure out what you really want to do,” he says. “That’s the key to doing undergraduate research. It’s not about making monumental progress, it’s more about trying out the research world, looking into different topics and seeing where your passion is.”

That process led him to success with the DOE fellowship, which, by virtue of providing both tuition and a stipend, gives him an early measure of independence as a researcher that most first-year graduate students need to work toward. He plans to continue collaborating with Rykaczewski and will be co-advised by NOAA scientist Michael Alexander, who is an adjunct faculty member at the University of Colorado. He also has collaborations set up with the National Center for Atmospheric Research in Boulder and hopes to boost connections through the 12-week internship at a DOE national laboratory that is a part of the fellowship.

Brady says Carolina was instrumental in making it all possible.

“I can’t see any other place that would have prepared me for this,” Brady says. "The Honors College funded my whole education here and provided me with research and travel money. The Office of Undergraduate Research gave me plenty of travel money as well as grant money to pay a salary so I could spend my time on my research. And I had that very lucky component of meeting Ryan, who got me jump-started on a difficult career and gave me the tools I needed to come into grad school prepared.

“And the Office of Fellowships and Scholar Programs led me through the process of going after awards that built my profile so I could go after the biggest awards. It was kind of the perfect storm of a lot of attention from unique programs that really supported my ambitions.”