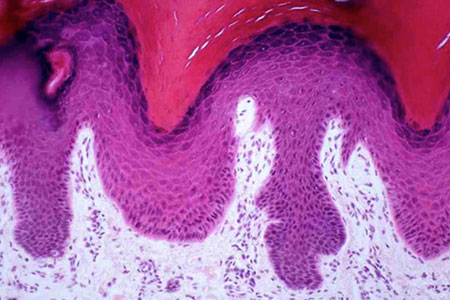 Students in Roger Sawyer and Robert Ogilvie's histology class work online with virtual slides, such as this one depicting the top two layers of human skin, the epidermis and dermis.

The pathway to joining the state’s cadre of health sciences professionals got a superhighway upgrade at the University of South Carolina a few years back, and the two professors responsible just earned national certification for their effort.

Roger Sawyer and Robert Ogilvie set out to create more flexibility for students interested in taking histology, the study of human tissue and a core requirement in many health disciplines, and the numbers don't lie in showing success. Their histology class, taught just one semester per year in a face-to-face lecture and laboratory to about 45 students until 2010, is now available all three terms and has reached more than 300 students on average every year since.

It's an explosive amount of growth that, given facilities and staffing requirements, could only happen online.

“When we did this, we really did away with limits,” says Sawyer, a professor of biological sciences and Interim Dean of the College of Arts and Sciences. “We could forget about the limits on labs and microscopes because the student sits at the laptop and does everything they need to do, whenever they want to.”

One key to their success was partnering with MBF Bioscience. The company provided software packages at reduced cost that Ogilvie, a retired professor emeritus at Medical University of South Carolina and visiting professor at UofSC, and Sawyer helped develop to handle their collections of digital tissue slides for the course. Histology training was once a labor-intensive process with stained slides at the microscope, but that labor has now been largely supplanted by virtual slides. The printout of one highly detailed digital file of a histological slide would cover a football field, Sawyer says, and the process of magnifying and focusing to reveal histological details can be replicated on a computer screen with the right software.

When we did this, we really did away with limits ... we could forget about the limits on labs and microscopes because the student sits at the laptop and does everything they need to do, whenever they want to.

Handling that much data is processor-intensive, so they developed the system in conjunction with computing systems personnel in the College of Arts and Sciences. “If 200 students were to come in to the server at the same time and used the same slide, the server could handle it,” Sawyer says. “They would never do that, by the way, but the system is that robust.”

In conjunction with Aisha Haynes in the Center for Teaching Excellence, Sawyer and Ogilvie worked their way through the course qualification process with Quality Matters, a national organization that tests and certifies online classes. This semester, the team received certification for HIST J530, the university's online histology course, the first such certification at UofSC.

For Sawyer, who has taught histology in Columbia since 1978, it’s gratifying that since 2011, the course has been able to reach students throughout the state — students from campuses outside Columbia now enroll every year, as well as some at MUSC and historically black colleges and universities. Moreover, student backgrounds have diversified considerably: Once taken almost entirely by premeds, the course now includes bioengineering, public health, pharmacy, anthropology and numerous other majors, he says.

But he and Ogilvie didn’t do it alone, he adds. “It’s maintained on the college’s servers, we work with Blackboard people a lot, we work with director of Distributed Learning Support Services Steve Adams a lot,” he says. “The university has really given us great support, and they have great resources to do this sort of thing.”