Born to run off the reels 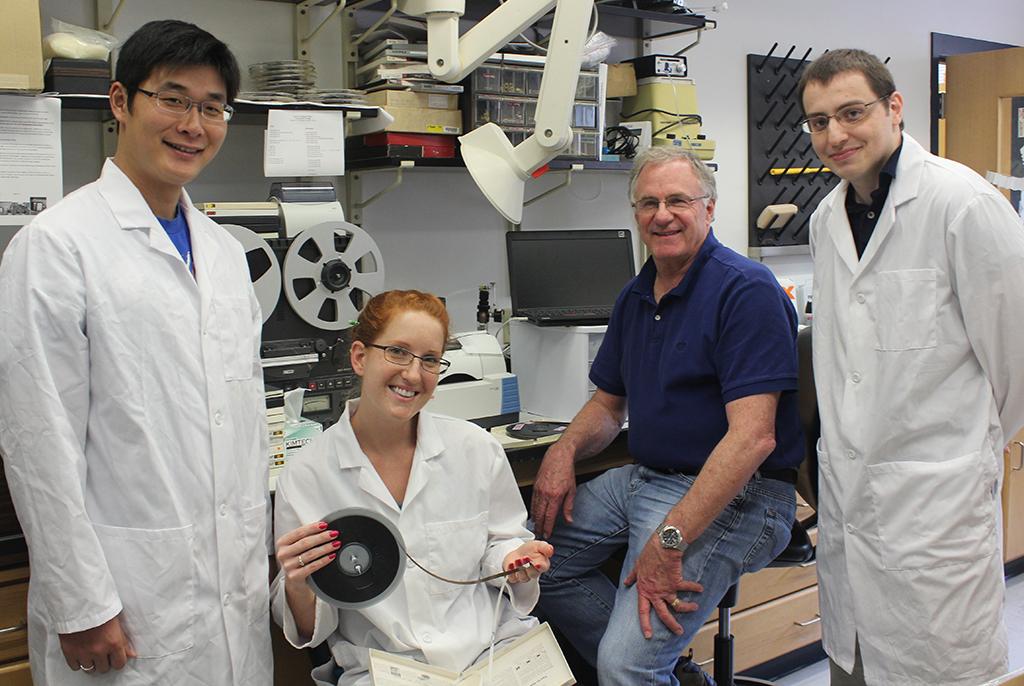 Many of the more than 46 million sound recordings archived throughout the U.S. carry the risk of being destroyed during an attempt to digitize them, because magnetic audiotape can deteriorate over time. Chemistry professor Steve Morgan leads a team of researchers developing a means to readily assess the structural condition of magnetic tape, using non-destructive infrared spectroscopy to identify tapes that suffer from ‘sticky-shed syndrome’ and will fall apart on playback.

The end of this summer marked the fortieth anniversary of the release of Bruce Springsteen’s Born to Run. If reminiscing fans felt a wave of nostalgia for one of the iconic albums of popular music, they likely also experienced a less-pleasant undertow in realizing just how much time has passed since their rock ‘n roll glory days.

Springsteen fans aren’t alone if they’re feeling their age, though. Some of their mementoes are as well. The baby boom generation was the first to have a fairly comprehensive soundtrack of their era recorded for posterity, but the audio archive has proven to have a limited shelf life.

Time can erode the structural integrity of magnetic tape, which became the dominant medium for recording sound in the early 1950s. What’s more, a deteriorated tape often doesn’t look any different from one that is fine. The only way to find out is to run it on a tape player, where it might literally come unglued.

Essentially, that makes digitizing magnetic tape a game of Russian roulette for every reel. Fortunately, scientists at the University of South Carolina and the Library of Congress started studying the problem a few years ago. They’ve recently published a paper and are doing further work in the laboratory to develop a system that can readily separate good tapes from bad.

Time doesn’t work alone to weaken magnetic tape. Its co-conspirator is humidity, the bane of curators everywhere. Water vapor can react with the polymers that make up the material in a tape. Even put in storage and never played, a tape runs the risk of developing what is called ‘sticky-shed syndrome.’

“When you play a tape that has deteriorated, which appears to be caused by exposure to water that’s in the air, the layer of material that stores the sound can come off the backing of the tape,” says Stephen Morgan, a professor of chemistry at the University of South Carolina. “You lose whatever was recorded. A tape with sticky-shed can foul the tape player as well, which is expensive and time consuming to repair.”

With Springsteen’s oeuvre, and much popular music recorded since the middle of the 20th century, the problem has been largely invisible to the public at large—but that’s not to say it hasn’t been a problem. Original studio and live performances recorded on magnetic tape were often later pulled out of storage to press CDs and prepare greatest hits albums and boxed sets, and audio engineers have been dealing with sticky-shed syndrome for decades.

They've developed a means of getting around it, but unfortunately, it’s a labor-intensive process that’s not uniform—people report a lot of differing approaches to doing it. And it also has the potential to cause more trouble down the road for audio recordings. And there are a lot out there—more than 46 million sound recordings are stored throughout the United States alone, according to a survey by Heritage Preservation, a public policy organization based in Washington, D.C.

The audio on deteriorated magnetic tape can sometimes be recovered, albeit temporarily, by what’s called ‘baking,’ which involves moderate heating in a dry oven. It’s a technique that remains more art than science. Audiophiles and engineers have reported variations of the technique in magazine articles, on the internet and elsewhere for at least 25 years. Suggested temperatures typically range between 120 and 140 degrees Fahrenheit, and durations from 1 to 48 hours.

‘Baking’ drives moisture out of the tape and can often restore its playability, it’s reported, but usually for a only few weeks. That provides a window for transferring the audio, but it also creates new risks for the original recording.

“Heating is not something that you want to do to most polymeric materials, if you don’t have to,” Morgan says. “It can accelerate chemical reactions, and there are some concerns about what it might do to the sound on the tape as well, before you even do the transfer.”

Morgan, fellow Carolina professor Micky Myrick, and Eric Breitung, a research scientist with the Library of Congress for five years and now with the Metropolitan Museum, started looking into the problem three years ago, focusing on the fundamental chemistry involved.

The material that comes apart during a sticky-shed episode is a thin membrane on the surface of the audiotape that comes in contact with the magnetic head of the player. On the vast majority of magnetic tape produced commercially, Morgan says, that membrane is made up of a mixture of polyester and polyurethane. The deterioration is thought to be caused by chemical hydrolysis of the polyester: water from the air reacts with the ester linkage, cutting it apart into an alcohol and a carboxylic acid.

The team thought they might be able use infrared spectroscopy to tell the difference between a tape with intact polyester and one that had experienced enough hydrolysis to cause sticky-shed syndrome. Using a surface infrared technique, attenuated total reflectance FTIR, they worked with a batch of 133 reel-to-reel audiotapes from the Library of Congress Motion Picture Broadcasting and Recorded Sound Division that had been classified as either intact or degraded by audio engineers who had handled them.

The intact and degraded tapes, which appear identical to the naked eye, also have very similar spectra under infrared light, but there are enough differences that the team was able to identify several peaks corresponding to changes in ester, carboxylic acid and alcohol content.

Identifying a fragile tape wasn’t as easy as spotting a peak in its IR spectrum that isn’t there in those of good tapes, though. The researchers had to go further, working out a method that involved measuring the spectral intensity at five different frequencies and looking for patterns in how the data were related to playability. They were able to develop a statistical algorithm that could predict, based purely on IR spectra collected without damaging the tape, whether a tape was playable or unplayable better than 90 percent of the time. The team, which included Carolina graduate students Brianna Cassidy, Zhenyu Lu, Nathan Fuenffinger and undergraduate Eric Bringley, recently published their results in the journal Analytical Chemistry.

“This gives archivists a way to triage the tapes that they have,” Morgan says. “They can identify the ones that can be immediately digitized, and they don’t do anything that harms any of them in the process.”

The group of 133 reel-to-reel tapes that the team used in their recent paper appears to be one that the Library of Congress acquired in a larger lot years ago, he says,  for the purpose of transferring even earlier recordings onto what was, at the time, the state-of-the art in audio media. That means they probably came from a single manufacturer, which is an important variable in the team’s assessment process.

Manufacturers used their own proprietary chemical mixtures and production procedures to make magnetic tape, Morgan says. As a result, TDK and Maxell reels are undoubtedly different at the molecular level of structure that IR spectroscopy reveals, and lots from the same manufacturer—and probably even units within the same lot—have unique characteristics that are reflected in IR spectra. It doesn’t help, he adds, that the manufacturer of a stored reel-to-reel tape is rarely identifiable when retrieved, because the tape itself is not marked with a company’s label, and after being played or recorded the first time, it ends up on a reel different from the one it came with.

As a result, the research team has moved on to looking at how manufacturing variations affect the prediction algorithm they created for the initial tapes they studied. Using never-opened, shrink-wrapped reel-to-reel tape of certain commercial provenance, they’re starting the process of building a database with more universal predictive capabilities.

For anyone interested in seeing history preserved, their progress should come as a welcome development. Since the technology’s widespread commercialization a little before 1950, reel-to-reel magnetic tape made it possible to make high-fidelity recordings outside the confines of a studio. Its use spread to near-ubiquity over the ensuing decades.

Magnetic tapes captured all sorts of aural ephemera, from political debates at civic meetings to speeches from the Civil Rights Movement to oral histories spoken by Civil War witnesses. Magnetic tape was also often frequently used, as in the Library of Congress lot used by the researchers, to back up earlier recordings made on fragile media, such as wax cylinders or phonograph disks that were from of a variety of materials, such as hard rubber, shellacs and cellophane.

Success in Morgan’s laboratory might save a lot more than music as an important part of American heritage migrates to a more permanent home.

The research was supported in part by a grant from the Institute of Museum and Library Services (LG-06-12-056912).