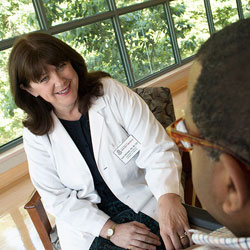 With support from the American Cancer Society, Karen McDonnell is developing programs to help lung cancer patients and their families to stop smoking and stay smoke-free.

Chronic coughs, the beeps of intravenous chemotherapy pumps and the hums of CT scanners are sounds of the fight against lung cancer — sounds that inspire Karen Kane McDonnell to action. For more than 20 years, McDonnell, a professor in the College of Nursing, has helped patients and their families battled the dreaded disease, serving as an oncology certified nurse in some of the most advanced health care systems in America.

“I’ve always worked as a cancer nurse,” she recalls. “I was attracted to cancer care as a nursing student." Trained at Memorial Sloan-Kettering Cancer Center in New York City, she has managed complex cases in Massachusetts, Maine and Virginia. And throughout her career McDonnell has witnessed numerous advancements in cancer diagnoses and prognoses. “Today, it’s a more treatable disease than when I first started,” she reports. “But there are several types of cancer for which advancements have been limited.”

One being lung cancer, the second leading type of cancer in both men and women, according to the American Cancer Society. Nearly 225,000 new cases are diagnosed each year as well as an estimated 150,000 deaths, accounting for about 27 percent of all cancer deaths in America.

Lung cancer is the second most common cancer in South Carolina with a higher incidence and death rate than in the U.S. “Men in our state have twice the rate of lung cancer than women. Unfortunately, cigarette smoking remains the predominant cause of lung cancer,” McDonnell says.

A big obstacle is late detection, McDonnell explains. “Most diagnoses of lung cancer come after the disease has progressed to advanced stages. That’s why early detection is so important.”

Her first encounter with early lung cancers was participation in the Early Lung Cancer Action Program, an international research study using low-dose CT scans to detect lung cancer in its earliest stages. It was a career-changing experience for her.

“Shortly after I started my work, I met a patient who was desperate to meet me. I wasn’t sure why. He was a tall and strapping man. When we met, he was eager to introduce his daughters. He said, ‘This program gave them their father back,’ gesturing to his three girls. ‘I wanted you to know that.’ He was diagnosed at stage one lung cancer and is a long-term survivor.”

Researchers at the Mayo Clinic think nicotine is the strongest addictive substance known to man. “I didn’t understand nicotine addiction until I started working with patients who repeatedly relapsed from being smoke-free to smoking again. Their sense of personal failure really touched me,” McDonnell adds.

She remembers a retired Washington, D.C., attorney who wanted to be in a study she was conducting near Bethesda, Md. “I knew he was smoker,” she says. "The odor of smoke filled the room. He said that he never failed at anything he tried, except stopping smoking. It really bothered him. I could see it on his face. During our conversation, he reached into his pocket and pull out a crumpled piece of paper. He said ‘I’ve been carrying this around with me for months.’ I opened the paper. It was a prescription for Chantix, a medication used to stop smoking. He couldn’t bring himself to fill it.”

At the University of South Carolina, McDonnell is developing programs to help lung cancer patients and their families stop smoking and stay smoke-free. Her early research shows that lung cancer patients have a better chance of smoking abstinence when family members are also smoke-free. “In my research most couples report that they never tried to stop together,” McDonnell says.

She has also learned that smoking abstinence is better achieved when tied to other lifestyle interventions, such as healthy eating, exercise and stress management.

Supported by a grant from the American Cancer Society, she’s moving forward with research focusing on African-American families. “African-Americans in the South have the highest rate of lung cancer incidences in the country. This new research aims developing a better understanding of the receptivity and preferences for lifestyle change of patients with lung cancer who are African-American,” McDonnell says.

McDonnell's work with patients and families facing death can be intense, but she sees all of her experiences – good and bad – as reminders of what has been achieved and what remains to be done.

To help support research like McDonnell's work in the College of Nursing, visit Carolina's Promise.