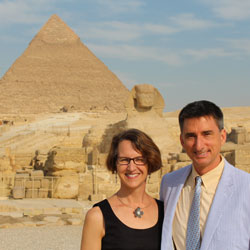 As employees at Cairo American School, alumni Amy Coquillard and David Chadwell have their graduation day photo snapped before a pretty impressive backdrop.

Wanderlust is real. It can also be highly rewarding — even in the face of a political unrest, nightly curfews and the occasional burst of gunfire.

Just ask Amy Coquillard, ’00 master’s of library science, and David Chadwell, ’99 master’s of teaching. The couple moved to Egypt just a month after President Mohamed Morsi was removed from power in the summer of 2013.

And they’re still there — and plan to stay there until at least 2017. Their children, Elliot in seventh grade, Anna in 10th, have been right there with them through all the turmoil.

No, they’re not military or military contractors or even government workers. Coquillard is head librarian (as well as middle and high school librarian) at Cairo American College, an international pre-K-12 day school in the Egyptian capital. Chadwell, an educational consultant and former classroom teacher, serves as the school’s curriculum coordinator.

“Our families thought we were nuts and not sure why we would take our children into this,” Coquillard says.  “But the people on the ground in Cairo said daily life was fine and things were basically peaceful.”

The couple “caught the travel bug” doing study abroad in college, Coquillard says. Then, in the 1990s, they taught for a few years in Tianjin, China, before coming to Columbia to attend graduate school at the University of South Carolina.

“We intended to stay a year, but that giant magnet of a state kept us there for 15 years because we were really happy with our life — work, friends, home, kids, etc.”

But the wanderlust continued to nag them. They had also always wanted to give their kids the overseas experience.

“One day we realized if we didn't figure it out soon, they would be too old to want to go,” says Coquillard. “We decided we needed to go in 2012 or 2013, before Anna started high school.”

So, in 2013, with their house in Columbia and most of their possessions already sold, with contracts to work in Cairo already signed and their daughter ready to start ninth grade, it was Egypt or bust.

“We thought we'd go, look around, and the worst thing that could happen was that we would be evacuated and have to come back to Columbia and start over,” Coquillard explains.

But the worst didn’t happen. A national curfew was instituted beginning each evening at 7, and one night they heard a rocket-propelled grenade nearby, but that just meant they had to adapt.

“It was a bit hard to have a social life when you work 7 a.m. to 5 p.m., and then have to be off the streets two hours later,” Coquillard says. “We played a lot of Clue as a family. And often we had blackouts due to lack of power, so we played Clue by candlelight.”

By comparison, the workday is pretty similar to what they did in back home in Columbia, where Coquillard was the integrated technology specialist at Lewis Greenview Elementary School and a longtime substitute librarian at Richland County Public Library.

“I do basically the same things,” says Coquillard. “It's just that the students are so different because we have 30-plus nationalities in the middle school and high school, and there are different norms for different cultures. That is what makes life so interesting.”