The ‘Oscar’ winner of Hampton County 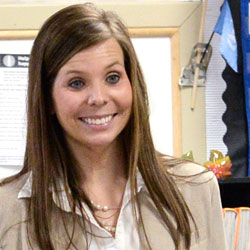 Melonee Ginn Mattie, who earned bachelor's and master's degrees in education from Carolina, is the 2015 recipient of the Milken Educator Award in South Carolina.

There are much newer school buildings in far more affluent school districts in South Carolina, but Hampton Elementary School in Hampton, S.C., has something this year that’s the envy of them all.

Her name is Melonee Ginn Mattie, a fifth-grade teacher whose instructional talent and commitment to educational excellence netted her the 2014-15 Milken Educator Award, the only one given in the Palmetto State. The $25,000 award targets early-to-mid career education professionals to recognize their achievements and the promise of future success.

“Early on in my teaching career, I realized that I couldn’t imagine doing anything else,” says Ginn, who as a child attended the same elementary school where she now teaches. “It’s very rural here, and we’re considered Title 1. But we have phenomenal teachers and great kids — we just don’t have the money in our district to provide everything we would like.”

After earning a bachelor’s in secondary education/social studies from the University of South Carolina Aiken, Ginn started her teaching career at her alma mater, Wade Hampton High School. After teaching there for seven years, she was ready for a change and earned a master’s in literacy and language from Carolina — the launch pad for her current teaching assignment at Hampton Elementary.

“The kids are not that different between high school and fifth grade,” she says. “The fifth graders are a little more willing to be receptive right from the beginning; the high schoolers you have to win over a bit sometimes.

“I’m with my fifth graders for the majority of the day, so I get to know them more, on a deeper level. They haven’t always had easy lives. Some haven’t had the family support that I had. You learn more from them than they do from you.”

Receiving the Milken Educator Award — sometimes called the “Oscars of teaching" — was a complete surprise for Ginn. The school principal announced that the state superintendent of education was coming for a visit. The next thing Ginn knew, her name was announced as South Carolina’s winner of the national award. The $25,000 accompanying check was an unexpected bonus, especially with her own wedding taking place in early May.

With 10 years of teaching under her belt, Ginn is committed to her profession and takes in stride the criticism often directed toward public schools.

“It’s easy to get caught up in test scores,” she says. “But if you just go in and teach and get to know your kids, that’s really what it’s about. I tell my students, ‘The test is not the most important thing. It’s not about a score.’ There are so many life lessons we teach our students — and they’re going to remember you forever. That’s what is important.”