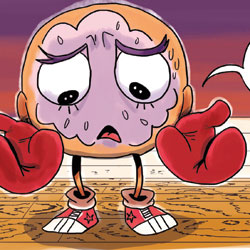 Students in Northrop Davis' manga class explore a range of creative genres in their approach to the Japanese-inspired medium of manga.

Patients in Midcity Hospital’s ICU are vanishing — all of them under the care of one doctor and his sinister “Project Afterlife.”

A wedding singer belts out tunes like a seasoned pop star, but loses her voice and her composure when the bridegroom at her latest reception gig turns out to be her ex-fiance.

Terracotta warriors come to life and make their way to a broken place in the Great Wall of China to defeat a band of evil wizards.

These storylines aren’t mere flights of fancy — they’re from published projects in Northrop Davis’ media arts class and proof positive that his students have learned the first rule of storytelling: Don’t be boring.

Along with learning how to tell stories, several of Davis’ former students are writing the beginning chapters of their own successful careers — in TV, the animation industry and the popular Japanese artform of manga. Their success stems from a mixture of innate and developed talent as well as personal mentoring from a professor whose contacts have helped open doors.

“I recently sold my first feature-length screenplay, and Prof. Davis was one of the first people I contacted to thank for all his help,” said Brook Driver, a British exchange student who took classes at Carolina in 2012-13.

Davis, an associate professor in the media arts program, came to Carolina in 2008 from the University of California Irvine where he compiled a Rolodex of Hollywood contacts, several of whom have made Skype appearances in his classrooms at Carolina, and a personal resume of screenwriting success. He has sold three screenplay projects to major Hollywood studios and is a regular lecturer on the screenwriting circuit.

Hundreds of students have enrolled in Davis’ TV and screenwriting courses at Carolina (he won a Mungo Undergraduate Teaching Award in 2012 and was named a Breakthrough Star this spring), and his manga courses have taken on a life of their own.

“Manga is part of what is popularly called 'cool Japan,’ and it’s in tune with college students,” says Davis, who successfully pitched a Japanese manga, Yukito Kishiro's "Battle Angel Alita," to 20th Century Fox, which, many years later was adapted, directed by Robert Rodriguez and produced by James Cameron and Jon Landau. Davis, who had no more to do with the project past the pitching stage, says “manga integrates storytelling into art; it’s extremely diverse genre-wise and fascinatingly creative.”

Davis isn’t an artist. He doesn’t teach his students how to draw manga images, but he coaches them nonstop on how to tell compelling stories through manga. Many of their creations can be found on a website edited and maintained by several of Davis’ former students.

“The manga classes teach students to work in groups, which mirrors work environments in the real world,” Davis says. “Students pitch their ideas to the whole class and then workshop their stories within their smaller group.

“The storyboarding skills teach students how to carry the eye through sequential art — an essential part of advertising. And the students also learn about copyright law and artistic value.”

Creating their own manga has helped many students find their storytelling voices and helped pave the way to career opportunities.

“Professor Davis is very intuitive when it comes to stories. He understands what it takes to catch the reader's attention,” says Ashley Poston, a 2012 media arts graduate. “Every scene needs to end in a cliffhanger, and every word on the page needs to further the story. There can't be anything lost or it makes a story weaker.”

Poston won the S.C. One-Act Playwrighting Award in high school and later took Davis’ TV writing course. She also got hooked on manga, and, with Davis’ help, landed an internship at Kodansha USA, the manga division of Random House Publishing.

She has presented at an international expo on the convergence of manga and young adult literature and has published a young adult contemporary novel, “The Sound of Us,” through Bloomsbury Children’s in 2013.  Her second novel in the series, “We Own the Night,” comes out this summer.

Louise Wang, a 2011 media arts grad and the first of Davis’ students to get an internship at Random House’s manga division, is now a storyboard assistant at Next Media Animation in Taiwan. Things she learned in the manga course at Carolina guide her work now.

“The way he taught us to pitch the idea and pages to another classmate gave me more opportunity to listen to what a reader would think — to stand in the reader's position and not just do what I want when creating the storyboard,” says Wang.

For Davis, the success of his students who have graduated continues to fuel his teaching. “You’re changing their lives and making a difference to them,” he says. “With students, you know much more immediately whether you’re making an impact. They bring so much energy to the classroom — there’s never a boring moment."

This story originally appeared in Carolinian magazine. To learn how you can receive three issues of Carolinian each year, visit the My Carolina Alumni Association website.