Growing into a leader 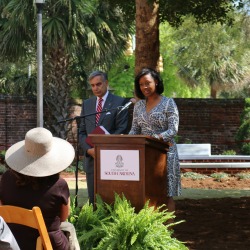 Former study body President Lindsay Richardson made an impact during her time at UofSC and earned one of the university's top honors, the Algernon Sydney Sullivan Award.

Lindsay Richardson didn’t come to Carolina looking for an opportunity to become a student leader, much less to become student body president. When she wanted to make changes to her residence hall, her residence hall director pointed her toward student government and the Residence Hall Association.

That choice changed Richardson’s college experience. That path led her to be a finalist for Outstanding Woman of the Year and to receive the university’s top honor, the Algernon Sydney Sullivan Award.

During her time at Carolina, Richardson says she has learned a lot about being a leader.

“When I came here, I had a very superficial view of leadership. I thought it was tied to a position,” says Richardson, a senior marketing, management and political science major. “I thought you had to have certain characteristics to lead. Throughout my time here working with different student leaders and mentors, I’ve learned that leadership is so much more.”

Since becoming a student leader, Richardson has coined her own definition: Leadership is rising to the occasion.

“I don’t like being in the center of attention. It’s very uncomfortable for me,” she says. “It was uncomfortable to assume such big responsibilities. It was a leap outside of my comfort zone but I’m glad I did it. It’s made me a better person, a better leader.”

The most challenging part for Richardson has been maintaining balance in her life. Between a full load of classes, multiple events around campus and the day-to-day duties as president, finding time to have fun has been another task on her to-do list. She had to set aside time for herself, to run, to read a book, to do anything she enjoys.

“That was my biggest challenge this year, learning how to balance personal business and really making sure that I was taking time for myself,” she says.

Richardson entered college with high expectations and even higher goals. She wanted to challenge herself, branch out and take advantage of all the opportunities that drew her to the university.

In her four years, she has done just that. On top of being student body president and being involved across campus, she found time to prepare for law school. She will join UofSC’s School of Law in the fall with dreams of practicing property or business law and working in public advocacy.

As Richardson closes out her time as an undergraduate student on campus, she hopes she has made an impact.

“I hope to leave the legacy that everyone is a leader and everyone can choose to leave an impact unimaginable,” she says.