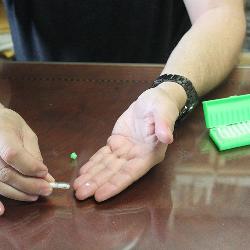 Tim Mousseau and his team are doing pioneering work with thermoluminescent detectors, using the gamma-radiation-sensitive crystals to measure radiation doses in individual subjects living in the wild.

This is the time of year when birds come out and really spread their wings, but since a disastrous day just before spring’s arrival four years ago, Japan’s Fukushima province has not been friendly to the feathered. And as several recent papers from University of South Carolina biologist Tim Mousseau and colleagues show, the avian situation there is just getting worse.

Since a few months after the March 11, 2011, earthquake, tsunami and subsequent nuclear catastrophe at Japan’s Fukushima-Daiichi nuclear power plant, Mousseau and several co-workers have undertaken a series of bird censuses in contaminated areas. They recently published a paper in the Journal of Ornithology showing results from the first three years of the effort for 57 bird species.

Many populations were found to have diminished in number as a result of the accident, with several species suffering dramatic declines. One hard-hit species was the barn swallow, Hirundo rustica, which suffered large population losses in a dose-dependent manner according to individually measured levels of radiation exposure.

The researchers looked more closely with the barn swallow, trying to isolate the mechanism causing the population decrease with their first two years of data. But as Mousseau, his postdoctoral associate Andrea Bonisoli-Alquati and colleagues reported in a separate recently published study in the journal Scientific Reports, their tests of peripheral erythrocytes in individual barn swallow nestlings failed to show genetic damage as a result of direct-dose radiation effects. Nevertheless, the more detailed study showed a dose-response decrease in both numbers and fraction of juveniles.

“We were working with a relatively small range of background exposures in this study because we weren’t able to get into the ‘hottest’ areas that first summer after the disaster, and we were only able to get to some ‘medium-hot’ areas the following summer,” Mousseau says. “So we had relatively little statistical power to detect those kinds of relationships, especially when you combine that with the fact that there are so few barn swallows left. We know that there were hundreds in a given area before the disaster, and just a couple of years later we’re only able to find a few dozen left. The declines have been really dramatic.”

Another place in the world that might provide insight into what’s now happening in Fukushima is Chernobyl, the scene in 1986 of a devastating release of radioactive materials in Ukraine. Mousseau, as director of the Chernobyl + Fukushima Research Initiative since it was founded in 2000 at Carolina, is uniquely qualified to draw comparisons, having been a leader over the past two decades in establishing a large body of research on the effects of radioactivity on animals living in the wild.

In a separate paper in the Journal of Ornithology, Mousseau and his longtime collaborator Anders Moller of the CNRS (France) discuss how the response of bird species differed between Fukushima and Chernobyl. One contrast between the effects of radiation in the two locales was striking: Migratory birds appear to fare worse in the mutagenic landscape of Chernobyl than year-round residents, whereas the opposite is true in Fukushima.

“It suggests to us that what we’re seeing in Fukushima right now is primarily through the direct result of exposure to radiation that’s generating a toxic effect — because the residents are getting a bigger dose by being there longer, they’re more affected,” Mousseau says. “Whereas in Chernobyl, many generations later, the migrants are more affected, and one possibility is that this reflects differences in mutation accumulation.

“The DNA repair capabilities of migratory species are impaired at least for a short period of time following migration. After they’ve been flapping their wings, generating oxidative stress as a consequence of exercise, their antioxidant levels — vitamin E, carotenoids, for example — are much lower than normal, so the radiation hits them harder than the resident species that don’t have that acute depletion effect.”

What might be most disheartening to the researchers involved, and bird-lovers in general, is how the situation is progressing in Fukushima. Despite the decline in background radiation in the area over these past four years, the deleterious effects of the accident on birds are actually increasing.

“The relationship between radiation and numbers started off negative the first summer, but the strength of the relationship has actually increased each year,” Mousseau says. “So now we see this really striking drop-off in numbers of birds as well as numbers of species of birds. So both the biodiversity and the abundance are showing dramatic impacts in these areas with higher radiation levels, even as the levels are declining.”