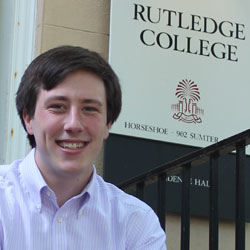 Going out on top

Connor Bain, one of this year's Algernon Sydney Sullivan Award winners, took advantage of every opportunity that came his way during his time at Carolina.

When Connor Bain was still in high school, he had competing ambitions. He knew from an early age that he might one day become a teacher — but a teacher of what? His interests ranged from math to computing to environmental science and sustainability. The son of a University of South Carolina music professor was also a dedicated musician.

“I had all these interests, but I wasn’t sure how to integrate them,” says Bain. “I had no idea how to connect all the dots.”

Now just weeks from graduating from the South Carolina Honor College with a degree in Computer Science and Mathematics, Bain looks back at his undergraduate career with a combination of gratitude and wonder. He didn’t simply connect the dots; he racked up a string of fellowships, assistantships and honors along the way, culminating this semester with an Algernon Sydney Sullivan Award.

Presented each year to top graduating seniors at 15 colleges and universities across the country by the Algernon Sydney Sullivan Foundation, the award recognizes campus leadership, exemplary character and service to the community. In Bain’s case, it’s also further validation that choosing the University of South Carolina was more than just a good decision.

“I came to college wanting to do all these things but not expecting necessarily to be able to, and USC gave me that opportunity,” he says. “I said ‘yes’ whenever an opportunity came up, and my experience was incredible. That’s happened so many times over the last four years, and I honestly don’t believe that would have happened anyplace else.”

While maintaining a 4.0 GPA, Bain triangulated his various interests by participating in extracurricular activities. Among other things, he has served as director of Carolina Science Outreach (a service organization started by his older brother, Reginald, '12, physics and math, and two other South Carolina Honors College students before Connor arrived on campus) and as a leadership intern with Sustainable Carolina.

Bain says the one organization, which gives talks and demonstrations on various scientific subjects at schools and adult organizations around the state, helped him hone and improve his teaching skills. The other, as he explains, gave him the opportunity to contribute directly to the university’s green various initiatives.

“Getting into CSO was a big thing  for me because I was able to share my interest in sustainability through presentations on things like offshore wind power or nuclear energy,” says Bain. “Then I got involved with Sustainable Carolina and I’ve interned for them pretty much all four years. That’s more the human aspect of sustainability, the applied aspect.”

Bain has also found time to play in the university’s percussion ensemble, do a three-month research assistantship at Harvard, serve as a teaching assistant for the Duke University Talent Identification Program, participate in the Gamecock Connection program as a student ambassador and take electives in horseback riding and kayaking.

“I think if you have any inkling to try something new, just say ‘yes,’ ” he says.

Most recently Bain has said “yes” to something else — the joint Ph.D. program in computer science and learning science at Northwestern University, which he will begin in the fall. His long-term goal, he explains, is to teach at the college level while also conducting research into how to improve teaching through technology.

“I’ve always loved the idea of teaching — it sort of runs in my family — but since I came to USC I’ve learned how to walk someone step by step through a process or a problem, and that’s really fun,” he says. “I sometimes say I enjoy helping other people with their homework even more than I enjoy doing my own homework.”