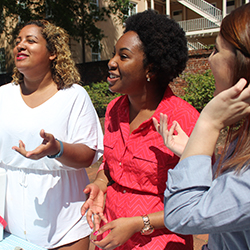 The University of South Carolina promises opportunities for its students. In the last month, Venisha Pendergrass and two friends have found this to be true.

Just before spring break, Pendergrass and a few friends noticed a need to have more professional development opportunities for young women on campus

“We realized we don’t have a conference for female students at USC and we figured the best way to do that was to collaborate,” says Pendergrass, a junior political science major. “We saw a need and decided to fulfill it.”

With just about a month left in classes, Pendergrass, Tatiana Chin and Liana Miller began planning Chicks Conference, a one-day professional development conference that provides college women with skills to help them “hatch their careers.” Everything moved quickly from there. The conference, set for April 25, filled up in a few short weeks.

The students hope the professional development will offer women on campus a chance to learn leadership skills and feel empowered.

Pendergrass notes that women hold just a handful of leadership roles on campus.

“We need more women in those kinds of roles,” she says. “Women provide a different perspective and campus needs to catch up with the rest of the world.”

Women in the local community and students will teach sessions at the conference, addressing everything from building a brand and using Greek life skills for a career to dressing like a boss and dealing with emotions in the workplace.

“Overall, we want them to walk away feeling empowered and to bridge the gap between what you learn in the classroom to the workforce and student organizations,” she says.

The university has played a big part in helping the students get their idea off the ground even though students organized the whole project. This year’s conference wouldn’t have come together without the help of Preston Residential College and the Residence Hall Association, for which Pendergrass is the newly elected president.

“USC has given us the resources to make this happen. We have the administration and staff here to help us and students need to utilize that,” she says.

Pendergrass hopes it won’t be the last chance for Carolina’s young women to discover their potential. Next year, the group will try to become an official student organization with events scheduled throughout the year and a conference again next spring.