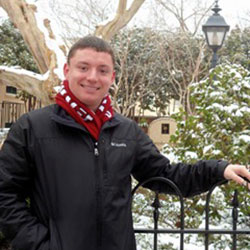 A snowstorm ended up changing Adam Mayer's destination for college, which turned out to be a good thing for Mayer and for the University of South Carolina.

If it weren’t for a rare winter snow in South Carolina four years ago, Adam Mayer would never have come to the University of South Carolina.

And that would have been a shame because the exercise science major from Wisconsin has had a huge impact on the university — and vice versa. Mayer graduates this May as one of three Algernon Sydney Sullivan Award winners, the highest award for graduating seniors.

“I’m from Avoca, population 608, and my high school graduation class numbered only 60 — and several of them were foreign exchange students,” says Mayer, who was initially concerned that he couldn’t cut it at a large public university. He applied to Carolina but had his sights set on a small private college.

“I had decided to go to Newberry College and was on my way down for a campus visit in January 2011 when I learned that a snowstorm in South Carolina had shut everything down. I drove back home and my acceptance letter from Carolina had arrived,” he says.

Mayer wasted no time overcoming his earlier misgivings about life at a big university. He decided to focus on Freshman Council and was amazed when he was one of 30 first-year students selected from 180 applicants. He also got involved in Service Saturdays and quickly became a site leader for the community service outreach, missing only one event in four years.

“Then I branched out and got into the skydiving club — my parents would call me after every time I jumped to make sure I landed OK,” he says.

He was also president of Carolina Productions for part of his junior and senior years and helped start Jingle Jam, an a capella fest. Since 2011 when it began, Mayer has been involved with USC Connect, which emphasizes learning beyond the classroom. He also was part of a board that launched the Graduation with Distinction program and was a freshman orientation leader.

Academically, Mayer had been focused on medical school since high school, but his leadership experiences at Carolina led him to consider an alternative.

“It’s always been ‘doctor, doctor, doctor’ in my thinking because I wanted to help people. Now I want to help others find their passion,” he says. Mayer will pursue a master’s in health administration this fall at the Medical University of South Carolina.

His advice to incoming freshman, particularly those hailing from small towns?

“Make the most of your time and take advantage of everything USC has to offer,” he says. “It can be overwhelming at first, but pretty soon you’ll find that you’ve made a home away from home.

“Looking back to when I first got here, there’s no way I thought I was going to become president of an organization with 30,000 students on campus and no way I’d ever be on a stage accepting a major award,” Mayer says. “I’m happy with all the connections I was able to make, and they will last a life time.”