Turn around for justice 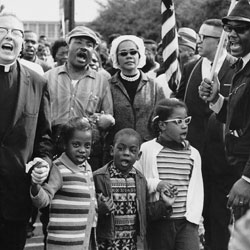 In 1965, when Carl Evans was a 23-year-old seminary student in Dallas, Texas, he was already interested in issues of racial equality. But witnessing events of the civil rights era firsthand solidified the University of South Carolina religious studies professor emeritus’s larger commitment to social justice.

On March 7 of that year, amid mounting tensions over voter discrimination against African-Americans in Selma, Ala., a march led by civil rights leaders John Lewis and the Rev. Hosea Williams ended in violence when Alabama state troopers and a band of local whites attacked the marchers with tear gas and nightsticks.

Now known as “Bloody Sunday,” the atrocities of that day made national headlines and inspired the Rev. Martin Luther King Jr. to organize a second march two days later. The so-called “Minister’s March” — later known as “Turnaround Tuesday” — would attract roughly 2,500 people, including Evans and two carloads of seminary classmates who drove through the night in rented cars with Mississippi plates to participate.

“We were driving from Dallas to Selma along what was then Highway 80, through the part of Mississippi where three civil rights workers had been killed by a mob of KKK members and buried under an earthen dam in the fall of ’64,” Evans says. “We were apprehensive about what it would mean for quote-unquote ‘outside agitators’ to be traveling through that part of the country at night.”

They made it safely to Selma, but a federal judge had issued an injunction against the planned march. After waiting several hours while members of King’s Southern Christian Leadership Conference negotiated with President Lyndon Johnson’s envoy and other political leaders, they were finally allowed to begin their march, which took them to the spot where the bloodshed had occurred two days earlier.

“There were local marchers as well as folks who had arrived that morning from all over the country,” Evans recalls. “Some of the local marchers had been in the march that Sunday and you could see their wounds. An 11- or 12-year-old girl, I remember, had her ear bandaged because a bullwhip had clipped it. There were people with broken arms, cuts on foreheads.”

His greatest apprehension, though, came as he considered the risk being taken by the leaders of the movement. Evans and his friends were near the back of the march, but King was front and center.

“People lined both sides of the street, but what made me especially nervous was that there were men on top of buildings,” he says. “The thought that went through my mind was that King was an easy target.”

King turned around and led the marchers back across the bridge ... to where the march had begun. One of the ironies was that we were singing the civil rights song ‘Ain’t Gonna Let Nobody Turn Me Around’ — as we were turning around!

Then, as they were cresting the Edmund Pettus Bridge, which arches over the Alabama River, the lead marchers came to a halt at the spot where Sunday’s march had gone so horribly wrong. In the pre-Twitter era, it was hard for anyone to know what was happening or about to happen, and the events of Bloody Sunday were fresh in everyone’s mind.

“From my vantage point, I saw two rows of state troopers wearing blue helmets, arms crossed, shoulder to shoulder, two-deep, across the highway ahead and on both sides so they formed kind of a cul-de-sac,” Evans says. “It was a very anxious moment, not knowing what was going to happen next.”

What happened next, of course, sent a powerful message: The marchers knelt on the road and prayed.

“Then King turned around and led the marchers back across the bridge and through the streets to Brown Chapel where the march had begun. One of the ironies was that we were singing the civil rights song ‘Ain’t Gonna Let Nobody Turn Me Around’ — as we were turning around!”

Some marchers were upset by the decision not to challenge the police barricade — “As far as we knew, the march was going to continue on toward Montgomery that day,” Evans says — but the commitment to nonviolence carried the day.

“King always wanted to avoid violence, and the turnaround was, in part, due to his determination to avoid any more bloodshed. And yet, he needed the publicity. It took national publicity to start to change things in Washington.”

It also took a third march — the famous 54-mile march from Selma to Montgomery, which would bring an estimated 25,000 people to the steps of the state capitol two weeks later.

After receiving permission from his professors to miss a few more classes, Evans and another carload of seminary students returned to Alabama to help rally support, going door to door in the African-American community to get the word out. He was also among the crowd gathered at the capitol to hear King speak.

“There was a sense of triumph, I think, after what had happened,” says Evans, who subsequently recounted the events in Selma and Montgomery in a letter to his hometown newspaper back in western Kansas.

“Frankly, what was happening in Alabama and other Southern states in the mid-1960s was a test of the democratic system. Had we not succeeded in getting passage of the Civil Rights Act in ’64, and the Voting Rights Act in ’65, we would be living in a society that’s very different from the one we’re living in now.

“As King said so many times, justice denied to one is justice denied to all — especially when it comes to something as basic as voting rights or civil rights in general. Any injustice anywhere must be confronted and overcome if we are to preserve a democratic system.”