One vision, many voices 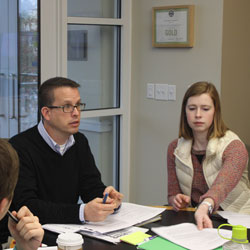 Ed Madden, the inaugural poet laureate for the city of Columbia, interacts with University of South Carolina undergraduates on the first day of the semester.

One spring day a few years back, a group of local folks convened at Columbia’s Riverbanks Zoo and Garden — not simply to enjoy the blossoming foliage, not simply to stroll the verdant grounds and ponder Latinate species names, not simply to get away from the grind and gristle of everyday life, but to write poetry.

The finished poems were then mounted on plaques in the very garden that inspired them so visitors could contemplate and enjoy them all summer.

That exercise in creative expression was the vision of University of South Carolina poet, associate professor and Women’s and Gender Studies director Ed Madden, who was at the time serving as the writer in residence at the zoo's botanical garden. Now, as the city of Columbia’s inaugural poet laureate, a position created in October 2014 by the city and the nonprofit organization One Columbia for Arts and History, Madden hopes to encourage similar literary expression all over town.

“I anticipate learning the city,” says Madden, whose four-year term began Jan. 1. “One of the things I want to do is to get to know the stories of the city, historical and contemporary. I feel like my job is not just to promote the arts but to document this city at this moment.”

Madden has published three books of poetry and has a fourth, entitled “Ark,” due in 2016, but the former S.C. Arts Commission fellow for prose sees the poet laureate post as more broadly serving the entire literary community.

“I’m poet laureate, my focus is poetry, but I think my charge is to promote the literary arts in general,” Madden says. “I want a community where we not only know each other but support each other and are willing to critique each other. There’s a point in building a community where you move past the rah-rah promotion of the arts to serious reflection on the quality of the arts. In the literary community, we still need to do both, I think.”

In addition to organizing workshops and readings, Madden plans to devote much of his $2,000 annual budget, and a big chunk of his own energy, to the creation of more public literary arts. Think poetry placed in shop windows. Think poetry on city buses. Think poetry just about anywhere you might not normally think poetry.

“There are measurable ways to gauge the effectiveness of the position: How many workshops did you set up? How many readings? How many young writers did you help get into print?” Madden says. “But there are also less tangible measures, like how strong a sense of literary community we build and how the literary arts contribute to the life and livelihood of the city.”

Madden, whose 2013 poetry chapbook “My Father’s House” was informed by his experiences caring for his terminally ill father, is also particularly interested in finding ways to use the literary arts as a healing aid by extending poetry into area hospitals and health care centers.

“If poetry can be one of the ways we explore what’s deeply human about us, it would be really nice to create a forum for exploring ways in which words can also be part of the healing process,” Madden says.

Madden will be officially announced as the city’s first poet laureate Jan. 15 at the Seibel’s House. His first scheduled reading as the city’s poet laureate will be part of the State of the City Address on Jan. 20. He will also give a reading at an event Feb. 17 commemorating the 150th anniversary of the burning of Columbia as part of the Art from the Ashes project jointly coordinated by One Columbia, Historic Columbia and Jasper magazine.