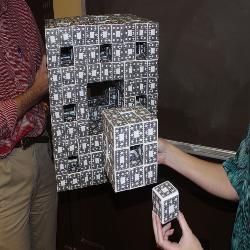 The Department of Mathematics plans to make a level-3 Menger sponge, using 48,000 donated business cards — an exercise in mathematics and creative paper folding.

Using the power of multiplication, a team from Carolina’s Department of Mathematics plans to participate in the making of history this coming spring by building a large, elegant geometrical shape called a Menger sponge.

Students, faculty and volunteers will make small cubes from donated business cards, which will become basic building blocks of an object that will ultimately be the size of a large desk. The university’s Menger sponge will be one of only two dozen models of similar size and construction that have been made around the world.

Building such an object promises to be challenging fun and educational, too. Concepts from math and engineering such as fractals, pattern replication and load bearing quickly come into focus.

“A Menger sponge takes in elements of architecture, art, civil engineering and mathematics,” says Francisco Blanco-Silva, the mathematics instructor who’s heading up the project. “My wife is not interested in any of those areas, but when she saw a picture of a Menger sponge, she told me, ‘I’m going to help with this!’”

And you can help, too. That’s because the Menger sponge model that Blanco-Silva wants to build will require a lot of business cards — 48,000.

Things will get started at the end of January when the annual UofSC High School Math Contest takes place. The Gamecock Math Club and Pi Mu Epsilon, the math honor society, will help out with logistics.

“We’ll recruit the help of all high school students, their instructors and any friends and relatives in attendance at the contest,” Blanco-Silva says. “We plan to build as many level-2 sponges as we can that day, and later on we’ll organize a larger group of volunteers to assemble the final level-3 Menger sponge.”

OK, a quick word of explanation: a Menger sponge is a little bit like a Rubik’s cube in that it’s made of lots of individual cubes that, joined together, create a larger cube. It’s more complex and far more interesting than a Rubik’s cube, though, because cubes in the middle and on each side are removed in a Menger sponge, creating a Swiss-cheese effect (see photo gallery images).

Karl Menger first described such an object while he was a student at the University of Vienna in the 1920s. In the 1990s, MIT electrical engineer Jeannine Mosley spent 10 years creating a level-3 Menger sponge made of business cards with the help of several teams of people.

Then a group at Queen Mary University of London figured out how to build a level-3 model in just a few days.

“We’re determined to build the next one,” Blanco-Silva says. “We’re hoping art students will lend their talents, engineering students will help with linking the smaller cubes together — without tape — and anyone else on campus who wants to get involved.”

If you’re not artistically or mathematically or engineeringly inclined, just rummage around in your desk for any outdated business cards. You can send them by campus mail or drop them off to Sherry Maw in LeConte 413.