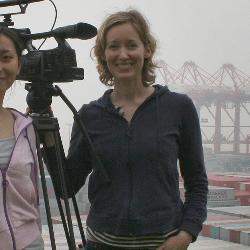 Laura Kissel follows American-grown cotton to textile manufacturers in China and the return trip of dresses, pants, socks and underwear that end up in retail outlets across the country.

At one point in Laura Kissel’s newest film a shopping cart rolls through aisles of low-priced blouses, slacks, jackets and sweaters. It’s a critical scene in “Cotton Road,” an award-winning documentary, that follows the journey of American-grown cotton across the Pacific Ocean to textile and clothing manufacturers in China, and the return trip of dresses, pants, socks and underwear that end up in retail outlets across the U.S.

“It’s a global phenomenon that I feel hadn’t been fully explored in film,” explains Kissel, a filmmaker and media arts professor in the School of Visual Art and Design at Carolina. “The idea started in a small town in rural Georgia where I was working on another film about a cotton farmer.”

Fascinated by the process, she learned that the majority — 75 percent, in fact — of all the cotton grown in America is shipped to China to be manufactured into clothing and other products and then shipped back.

For a year, Kissel filmed more than 150 hours of footage. Starting in Aiken County, she documented the planting and harvesting, and then followed the cotton to the port of Savannah, Ga. During the first leg of this international odyssey, farmers, gin operators, truck drivers and commodities brokers explain their role in getting the fluffy plant from the fields to southeast China.

Once in China, “Cotton Road” focuses on lives of warehouse employees, factory workers, plant managers and even a factory cook, each explaining their role in transforming raw cotton into thread, thread into bolts of cloth and finally cloth into garments. The film records their lives in Hangzhou, Changzhou and Shanghai, where Kissel lived for seven months.

“The first time, I think the smell (of cotton) is terrible,” Cathie Xu says in the film. Xu is a logistics and warehouse employee working near Shanghai. “But my boss tells me it’s the smell of money. Now, I like the smell.”

Liu Chengfeng, a 19-year-old textile worker, is in the factory to help her family. “My mother said we must repair the roof right away, otherwise the house will flood when it rains,” Chengfeng says while facing the camera. “When I saw they repaired our house, I realized my schooling was over.”

Chengfeng’s story isn’t unusual. Many young women leave China’s rural provinces in search of better lives in factory cities. Chengfeng is part of the largest migration of people in human history. The number of people living and working away from their homes in China is estimated to be 160 million to 230 million people.

The impact of Western production standards is also made clear.

“Some of my customers would like to give me orders, but the problem is that some American orders require factory inspection,” complains Jiang Guifang while walking through her factory. Guifang is the general manager of the Shanghai Sky-High Fashion Co., a small garment company. “The factory inspection standards are very, very high. For example, no working overtime. If they work overtime, you need to pay them several times their salary. How can we afford those salaries on the prices offered by American companies? I can tell you the truth: All companies that have ‘passed’ inspection have actually done something underhandedly.”

In addition to a China-based producer, Kissel was helped by several UofSC faculty members in the making of “Cotton Road.” Music professor Fang Man composed the score, while language and literature professors Michael Hill andJie Guo helped translate the Chinese to English. Since its completion earlier this year, the documentary has been screened at festivals and on college campuses across the country, including the Santa Monica Independent Film Festival where it was awarded best documentary feature.

“Cotton Road” goes on to illustrate how the combination of low-cost labor and the appetite for cheap consumer goods is the force pushing this global transaction. “Clothing production travels to places where labor costs less and ‘human resources’ are plentiful. Most clothing is made by hand and not mechanized,” Kissel says.

The industry needs people to sew on sleeves and buttons. Combine that with Western society’s rapacious consumption for cheap goods. “We consume and consume and consume. Somebody is going to have to supply that demand. China has become the manufacturer for the world.

“I wanted to implicate the consumer in some way, to bring the consumer into the story,” Kissel says. “The best way to really do that was to think of the life cycle of the  clothing we buy, which we are so quick to discard. It’s the consumer’s responsibility to be aware that our consumption habits have negative impacts on the environment and human condition.”