Window on the ocean’s past 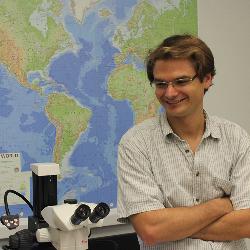 The team of researchers used tree rings to reconstruct some 600 years of history of the marine environment off the coast of California. They showed that large, temporary drops in fish populations have occurred naturally in the past, but human activities might be making those events more frequent.

As a child in southern California, Ryan Rykaczewski spent a fair amount of time on his grandfather's boat, fishing with him off the Pacific coast near Los Angeles. At the time, he didn't think there was much rhyme or reason to their luck on the water.

"Sometimes we'd catch a lot of fish and sometimes we didn't," he says. "I just thought it was chaotic, that we could never understand what was going on."

But education changed his mind. Now an oceanographer and assistant professor at the University of South Carolina, he's working to understand the many factors that determine how plentiful fish might be in the sea.

And he's part of a team that just found a way to look deep into the ocean's past. They've shown that natural processes can cause dramatic year-to-year drops in fish populations and growth rates and raised questions about whether human activities might be making those declines more frequent.

The focus of the research is the California current, which stretches from Washington state to the Baja peninsula and is one of a handful of coastal waters on Earth from which an inordinately large portion of the world's fish harvest originates.

"There's the California current, the Humboldt current off the coast of Peru and Chile, the Canary current off the coast of Portugal and Morocco, and the Benguela current off of South Africa and Namibia," Rykaczewski says. "They're all along the western edges of the major continents, and because of the way the air circulates on the globe, all of these regions have winds that blow towards the equator. Couple that with the rotation of the Earth, and you get a certain type of vertical flow in the water column called upwelling."

The upwelling brings cold, nutrient-rich water to the surface. Phytoplankton thrive in those waters, as does every species higher on the food chain.

Trouble off the California coast

That makes recent dips in the yearly Pacific catch worrisome. "The past 30 years have been relatively extreme," says Rykaczewski. Climate models predict lessening of the coastal winds that underpin the California current, he adds, so people are wondering if recent drops in fish harvest might be the new norm.

It's hard to answer that question, though, given the limited time period for which hard data are available. Because instrumental records date back just a little over 60 years, the team decided to look at landlubbing proxies that can yield hundreds of years of annual data points — namely, trees.

They first used three measurements in the instrumental record (sea level height, a measure of coastal wind strength, and the pressure difference between Australia and the northeast Pacific) to calculate a single number to represent the winter marine climate for each year. Summer is when winds blow strongest and upwelling is most prevalent, but the major cause of a diminished fish catch is actually low upwelling in the winter, Rykaczewski says.

By comparing the winter climate index number with observed biological activity of a variety of marine and terrestrial species (recorded since the early 1970s), the team was able to establish a tight connection between the winter marine climate, marine biological productivity, terrestrial climate and terrestrial biological productivity. In part, the team showed that high-pressure systems off the coast, which favor upwelling and consequently make fish grow like gangbusters, also block storms from moving inland, depriving the coast of rainfall.

In other words, slow tree growth means lots of fish, and vice versa.

Looking back over the centuries

They then used tree rings to extrapolate back in time almost 600 years. They found that very low winter upwelling and its concomitant diminished growth of marine species had, in fact, occurred in the distant past, and with equal severity.

"What we've experienced recently is extreme, but it's not unprecedented," Rykaczewski says. "It's not outside the envelope of what we've seen over the last six centuries. One bad year doesn't necessarily mean that the ecosystem is going to hell in a handbasket, because we've seen that this has happened in the past, and the ecosystem does bounce back."

One trend bears watching in coming years, though. The team of scientists from across the country, which just published their work in the journal Science, reports that the frequency of exceptionally low upwelling has increased recently.

"That is perhaps something to be concerned about in terms of climate change. We need to see if it persists in the future," Rykaczewski says. "Increased variability of the marine ecosystem is one projected consequence of anthropogenic global climate change, but for now we can't nail down that the increased variability we've seen recently is specifically the result of global climate change. It's been highly variable recently, but it's also been highly variable during other periods in the past 600 years."

Finding connections between the marine world and the terrestrial one was a particularly interesting aspect of the project, Rykaczewski says, and the ability to use the connections to look into the ocean's past should prove profitable in other geographic locations. Past marine productivity and variability have been estimated from sediments and fossilized coral elsewhere, he says, but those methods only resolve time points to a decade or more and, in the case of coral, are limited to tropical waters.

And the results are more than purely academic.

"There are a number of countries, usually poorer ones, that depend a lot on fisheries for their protein source and their economy," Rykaczewski says. "It's specifically in these regions where you catch so many fish that climate can have a really big impact on their society."

To learn how you can support groundbreaking research like Ryan Rykaczewski's work on fluctuations in fish populations, visit Carolina's Promise.