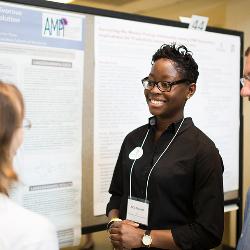 Research is a year-round pursuit at Carolina, with seven distinct programs operating this summer on campus. Ka'la Drayton was one of 60 students presenting results at the Summer Research Symposium at the end of the term.

Ka'la Drayton got an early start crossing items off her bucket list at the University of South Carolina. The rising senior thought it might be years before she could take a trip to Africa, but a program at the university made her dream come true this summer.

"The whole experience of going to South Africa was mind-blowing," she says. "This was something I've always wanted to do."

Drayton's ticket to Cape Town was no handout, though, and her stay there was no vacation, either. The South Carolina Alliance for Minority Participation at Carolina provided grant funding that made the trip possible, and the price of the passage is hours of laboratory work and research, much of which will continue into her senior year.

But working with mentor Adam Hartstone-Rose in the School of Medicine also falls on the positive side of the ledger for Drayton. "When I found out I could go to Africa and do research as well, all I wanted to do was sign my name," Drayton says. Midway through her junior year, she had been looking for a research experience on campus, only to find one that also sent her to the continent of her ancestors.

Landing in Cape Town in mid-July, Drayton worked for two weeks with Hartstone-Rose preparing molds of teeth from fossilized remains of hyenas and mongeese some 5.2 million years old.

The molds will be converted into three-dimensional casts of teeth, which can be used to determine feeding habits of the animals. Comparing them with similar casts from modern animals, the team will study how those habits have evolved over time. Hartstone-Rose has recently published research showing how hyena diets may have changed in South Africa over the past 5 million years. His laboratory works with a variety of animals, including gorillas, monkeys, cats, bears and weasels.

"Ka'la was a fantastic addition to my team," Hartstone-Rose says. "If she follows through as I anticipate she will, she will eventually be a coauthor on a peer-reviewed manuscript."

Drayton found that the research broadened her career horizons. "As a pre-med, I'm currently leaning towards pediatrics," she says. "But since I started working in the lab, doing dissections and learning more about human anatomy, I really got interested in performing surgeries."

The team also traveled to Johannesberg, and Drayton's immersion in the culture was memorable.

"Africa gives off a sense of pride that you can feel walking down the street," she says. "Everyone is kind and accepting, and the scenery and openness gives me a greater appreciation for life. I have friends that have visited Africa before, and the only thing they can say is you have to experience it for yourself."

Experiencing it herself was an unexpected but welcome surprise for Drayton. She wasn't aware of the South Carolina Alliance for Minority Participation program until Hartstone-Rose asked Julie Morris, the director of the Office of Undergraduate Research, for guidance in finding grant funding for Drayton to travel and do laboratory research.

"It was a great experience, one that everyone should take advantage of."