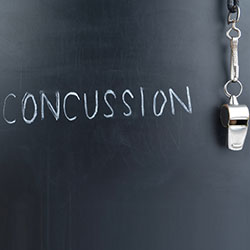 UofSC grad George Wham has helped increase the awareness of the dangers of concussions to high school athletes.

In 17 years as an athletic trainer at South Carolina's Pelion High School, George Wham has seen his share of sports-related concussions. In fact, last year, student athletes at his school experienced at least 30 of them, 12 just in football.

The high numbers are consistent with what he has seen over the past few years, and they're higher than they used to be. But that's not all bad news. The rising numbers have a lot to do with better diagnostics, greater awareness and stricter guidelines for determining when an athlete has suffered a potentially dangerous head injury and needs to come out of the game.

"When trainers were using the old definitions, we didn't always know what a concussion was, and then there were athletes who just didn't report them," says Wham, who completed his Ed.D. in athletic training in 2006 at the University of South Carolina. "They'd have a headache and didn't understand why that was maybe bigger than they thought it was."

Pelion High School was the first in the state to use impact testing, a computer-based neurocognitive exam that allows trainers to get a baseline for an athlete's memory, reaction time and other factors. When an athlete gets concussed, the testing gives trainers a tool to help determine the injury's severity.

"We instituted that in 2008," says Wham. "The Brain Injury Association of South Carolina heard about what we were doing, and I started doing a lot of speaking for them and trying to figure out how we reach the high school sports community."

For the past three years, Wham has served as the chairman for governmental affairs for the South Carolina Athletic Trainers Association, which honored him this year as statewide Athletic Trainer of the Year for helping craft the new South Carolina Student Athlete Concussion Law then shepherding it through the legislative process.

The law, which went into effect in 2013, requires concussion education for coaches and student athletes about how to identify concussive injuries when they occur, the importance of reporting them and what happens if you don't. Schools are now required to have a concussion plan in place that is consistent with current scientific medical knowledge, which is constantly evolving.

"We have to understand the nature of this injury," says Wham. "This isn't just a bell-ringer, this isn't just a headache. It's something that needs to be taken seriously."

According to Wham, roughly 75 percent of South Carolina high schools now employ or have access to an athletic trainer. It's a fact he points to as proof of rising awareness but also as proof that his alma mater's efforts in the field are having statewide impact.

"The reason that S.C. can say we have 75 percent of our schools covered with athletic trainers is due in large part to the Athletic Training Education Program at Carolina producing so many high-quality graduates. We can't say anymore that there aren't enough qualified people to fill the jobs," Wham says.

"From a resources standpoint, from the quality of the students and faculty, its reputation, what's being published, it's a program that Carolina should be proud of."

Visit Carolina's Promise to learn how you can help support important programs like athletic training in UofSC's College of Education.