Ironing out details of the carbon cycle 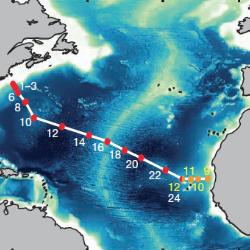 Iron is an essential element in all living creatures, and its availability in seawater can have a profound effect on phytoplankton growth and, consequently, the Earth's carbon cycle. In the journal Nature, Seth John and Tim Conway have just published an assessment of the various sources of dissolved iron in the north Atlantic Ocean.

Iron is present in tiny concentrations in seawater. On the order of a few billionths of a gram in a liter.

"I did a calculation once on a ton of ocean water," says Seth John, an assistant professor in the department of marine science at the University of South Carolina. "The amount of iron in that ton of water would weigh about as much as a single eyelash."

Given that there is so little iron in seawater, one might conclude that its presence there is inconsequential.

Hardly. Iron is one of the essential elements of life. Found in enzymes like myoglobin and hemoglobin and cytochrome P450, iron is an essential cog in the biomachinery of every living cell. And its scarcity in the ocean, the Earth's wellspring of life, only magnifies its importance.

"The key reason that everybody cares about iron is because it limits the growth of phytoplankton, such as algae, in maybe a fifth of the ocean," says John, a researcher in the School of Earth, Ocean and Environment in South Carolina's College of Arts and Sciences.

In those iron-poor places, there's plenty of everything else that phytoplankton, the base of the food web, need to grow — sunlight, carbon, fixed nitrogen, water. Just a small change in the amount of iron that finds its way there can have a dramatic impact on the growth of photosynthetic organisms and their concomitant uptake of carbon dioxide.

When algae and other phytoplankton grow, they take carbon dioxide out of the atmosphere, converting it into proteins and other carbon-based molecules that constitute living cells. And it takes very little iron to keep this process going — in a typical cell, for every atom of iron, there are about a million atoms of carbon, says John. A little iron goes a long way in allowing phytoplankton to grow and pull carbon dioxide out of the air.

Knowing how iron moves into the oceans is thus crucial for scientists to fully understand the details of the carbon cycle on Earth.

John and his colleagues have spent the past several years working to fill in those details. They've been collecting ocean samples and developing their analytical techniques for quantifying different natural isotopes of iron in seawater, which is one means of tracking the origins of the dissolved metal.

Iron finds its way into seawater from a variety of sources. The ratio of the stable natural isotopes iron-56 and iron-54 from these sources can differ from the ratio in the Earth's crust because a number of chemical processes change the ratio by favoring the release of one of the two isotopes. The processes controlling release of iron from distinct sources vary, and so different sources can have characteristic iron-56/iron-54 ratios. Tiny variations in this ratio in seawater samples thus provide insight into the origin of the iron found there.

For example, one source is sediments from the ocean's floor, from which iron is typically released into the ocean under very low-oxygen (anoxic) conditions, and release of 'light' iron-54 is favored. Another source is dust from the atmosphere, from which Fe is typically released into the ocean with processes favoring 'heavy' iron-56. Using this information, the researchers were able to establish, for the first time, where dissolved iron in seawater had originated.

John and postdoctoral associate Tim Conway have developed a high-throughput means of purifying seawater samples and determining the iron-56/iron-54 ratio, a method capable of handling the nearly 600 samples they collected in a high-resolution transect of the north Atlantic Ocean on a GEOTRACES cruise.

From those samples, they were able to show in a paper published in the journal Nature that the largest source of iron in the north Atlantic, somewhere between 70 and 90 percent, comes from dust that blows in from the Sahara desert.

The results are helping define a very poorly understood but essential component of the carbon cycle.

The breakdown of the sources might surprise many, according to John and Conway.

"I think that a lot of people thought that there would be a lot of dust in the north Atlantic, and so while it's very satisfying to have proved that, it's perhaps more surprising that there's 20 percent that comes from other sources," says John. "I think before we published this paper, you would have found many, many people who would have guessed that that was zero percent or very close to zero percent."

"That's one interesting thing that the iron isotopes really show on the east margin," says Conway. "Off the coast of Africa you have really high iron, and in the past most people attributed that just to dust. We can show from the iron isotopes that there's actually iron coming from sediments.

"People have always argued whether it was dust or sediments. This is one of the first studies to really show clearly that sediments are important as well."