How to make it in film, TV 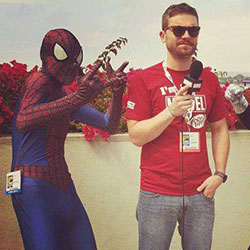 This week when comic book fans take over part of San Diego for the annual Comic-Con International, one University of South Carolina alumnus will be bringing it to the masses.

That's because Blake Garris works for Marvel Comics, running parts of the comic company's website, including live streaming and creating videos from the famous comic convention. On top of writing stories and producing videos, Garris interviews celebrities to find out their favorite comic character. For a self-proclaimed comic lover, it's a dream job.

When the South Carolina native first came to college, his interest wasn't focused on film, television and media. The 2006 political science graduate first thought he would go into politics.

"My last year in college, I was working at an internship at ETV and that's what really got me into media," he says. "My dad said, 'Hey, you watch a lot of TV, so why don't you work in TV?' I guess it led from there."

Garris found a job at S.C. ETV after graduation and started working as a production assistant on various television shows in region. Sometimes he would drive to North Carolina and Georgia to work on various projects like Paula Deen's cooking show or Showtime's "Homeland," which is filmed in Charlotte, N.C.

"South Carolina has good films and TV shows that you can work on," Garris says. "It was the perfect hub."

Then he returned to Carolina for a master's degree in media arts. The dream job at Marvel Comics in New York City fell into Garris' lap when he wrote articles about bands for online music websites while in graduate school. Marvel asked him to start interviewing bands and celebrities about their favorite comic books.

"I love South Carolina and always knew I would work in some capacity in film or TV production, but I never thought I would move to New York City for sure," he says.

His time at Carolina has certainly paid off, he says. His political science background is helpful when dealing with personalities, but his media arts background comes into play the most.

"The media arts program was fantastic. I'm very thankful for the professors there," he says. "They basically just gave me a camera, some lighting equipment, audio and said 'Make your own stuff.' That's really rare to have that kind of free-flowing idea."

The best thing about working at Marvel? As one executive says, you can't throw a rock and not hit something Marvel-related, he says. That means Garris can interview almost any celebrity and find a Marvel comic fan.

"This is the best time for Marvel since the movies are doing so well," says Garris.

As for where his career will take him next, Garris is keeping all options on the table. "I've always had the mentality of just seeing where it goes," he says. "Doors just kind of open if you're open to saying yes to the right thing."

For now, you can check out Garris' work live this weekend during ComicCon on Marvel's website and YouTube.