As a Gamecock, my focus has No Limits 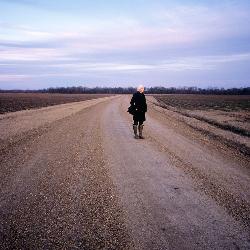 Focus on the South

Kathleen Robbins, professor of photography, documents changes in the Land of Cotton. You can view more photographs from "In Cotton" by visiting her website.

The soil at Belle Chase is dark, wet and sticky. It's rich and fertile. And for generations this part of the Mississippi Delta was the Land of Cotton. And that's the way Kathleen Robbins remembers it.

As a child, Belle Chase was the place where her artist grandmother lived. "I lived in town with my parents and not on the farm. I would go to the farm on weekends, where she had a painting studio," she explains. "And every once in awhile, we played in the cotton after it was picked."

The family has owned this small farm since the late 1800s. And Kathleen recalls her late grandfather, a third-generation cotton farmer, talking about the dirt as if it were some sacred mixture that gave life to the white fluffy bolls. But for the University of South Carolina photography professor, "The deep brown soil is more like mud that sucks you in and cakes to your shoes."

Then in 2010, after more than 100 years of growing rows of thorny bushes, two new kings of the region were planted on Belle Chase. Corn and soybeans, the new reigning monarchs, have replaced cotton in recent years. "Growing cotton, at least in this part of the country, requires a lot of care and attention," says Kathleen. "It's labor-intensive, and it's a difficult crop to predict. The market for cotton is up one year and down the next. So corn and soybeans have slowly taken over. As a result, the local gins are closing. The change has transformed the landscape and the way of life here."

For good or bad, cotton supported landowners, laborers and communities. It was the basis of the local economy and the social mores that came with living in the South.

Armed with cameras, lenses and film, Kathleen, an award-winning artist, is documenting the changes taking place on Belle Chase and on surrounding farms. Her photographic series "In Cotton" presents the contemporary delta, revealing abandoned homesteads, deserted schools and the decline of rural farming communities. She captures the region's lush landscapes along with the solitary farmers who cultivate the new kings.

When she began the work, Kathleen also sought to capture the moods of the remaining residents as they changed with the times. "I assumed that they would talk about history, traditions and attachment to a way certain way of life," she explains. "None of that happened. From their point of view, it's purely a new business venture. There seems to be little if no romantic attachment to cotton at all." From a historical perspective, "In Cotton" is party motivated by the documentary style of American photographer Walker Evans. Aesthetically however, Kathleen's grandmother, who often talked about being possessed by Belle Chase as much as she possessed it, serves as the inspiration for the project. "I think the work has always been an homage to her," she says. "My grandmother was a landscape painter who worked from Polaroid studies. My square photographs closely resemble her images from the farm. And the romantic aspect of the land she spoke about is attractive to me. I love to make photographs in general, but I need to make pictures in Mississippi — in the delta. It helps me to learn something about my past — about how people live and how that's similar or different from my own background — my own present. I think my grandmother shared similar motives for documenting this peculiar landscape."

"In Cotton" is made possible with support from the Creative and Performing Arts Grants Program at Carolina, where she teaches in the School of Visual Art and Design.

As an affiliate faculty member in the university's Institute of Southern Studies, Kathleen has developed On the Road, a new Maymester class focusing on documentary photography. Students in the class travel and photograph the sites, landscapes and people along U.S. Route 17 in the South Carolina Lowcountry, learning along the way about the history and culture of the area. They keep journals of their road trip, creating a written and visual documentation of their journey.

"I want students to understand the importance of getting out in the world to create photographs," Kathleen says. "It's important to become engaged in your community — to become invested in the work and make images that you care about. I'm always excited to have the opportunity to work with students in the field."

Kathleen's photographs have been exhibited in venues such as the New Orleans Photo Alliance, Light Factory Museum of Contemporary Photography & Film, Rayko Gallery and the Ogden Museum of Southern Art. Her work has been featured by NPR's picture show blog, PDN's photo of the day, Flak Photo, Fraction, the Design Observer, and One One Thousand. She is represented by Rebekah Jacob in Charleston. In 2012, she was part of the Critical Mass top 50 and she was the recipient of the 2011 PhotoNOLA Review Prize.

Find out how you can support artists like Kathleen Robbins and the Creative and Performing Arts Grants Program by visiting Carolina's Promise.