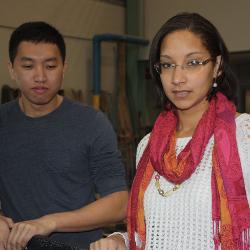 Whatever floats your boat

Civil engineering students created their own formula for a lightweight concrete canoe for a competition in Charleston.

Courtney Wheeler rattles off the ingredients of a lightweight concrete mixture like someone reciting a treasured family recipe. She knows the amounts, what each ingredient does and why it works to create a structure light enough to float with four people in it, but sturdy enough to hold those people.

Her know-how and leadership skills make her a natural co-captain for the College of Engineering and Computing’s entry in this year’s Concrete Canoe Competition, which pits student teams in a battle of designing, building, floating and paddling these 300-pound boats.

These are not cement boats, mind you, they are a unique mixture of concrete and other substances, such as perlite, which home gardeners frequently use to control moisture levels in potted plants, and recycled ash from coal furnaces. Entries are judged on how much recycled material was used, water resistance and racing.

Once the Carolina crew decided on its concrete formula, the ingredients were laid out like a giant cooking show and the mixing began. The first mixture was too heavy (they didn’t presoak the perlite, so its weight was incorrectly calculated) so they made another batch, troweled it onto a wooden form built by co-captain Narong Phal and let it cure.

After nearly a month of curing and an out-of-this-world paint job, the canoe dubbed the “Space Odyssey” is ready for the waters of the James Island County Park in Charleston.

Wheeler says she knew at early age that she had an aptitude for math and structure.

“When I was in high school, I shadowed an architect,” she says. “He said I might need some time to figure out what the drawings meant, but I knew what they were right away.”

Wheeler began a degree in engineering at the University of South Carolina Aiken before joining the Air Force in 2009. She moved to the Reserves after giving birth to her daughter, Jasmine, three years ago.

“I was working, a single mom and in the Reserves,” she says. “I thought it was time to go back to become an engineer.”

She will graduate in May with a degree in civil engineering and is trying to decide between working for a local engineering firm or at the Boeing plant in Charleston, where she interned last year.

More than one way to cross a river

At the same competition, another group of engineering students are building an alternate route across the water and competing in the annual Steel Bridge Competition. This timed competition requires the students to assemble prefabricated pieces for a bridge of their own design to meet certain size, stress and load requirements.

Bruce Barragan, a co-captain of the team, says the bridge may work great in the warehouse, but the reassembled piece cannot move more than an inch when put to the test. So that means the team will need to be extra mindful of tightening bolts as it rushes to assemble its bridge.

“In structural steel designs, most of the time when there are failures, it is in the connections,” says Barragan, a McNair Scholar and student in the Honors College who will graduate in May with a civil engineering degree.

The Concrete Canoe competition will be from 8 a.m. to 3 p.m., Friday (March 7) at James Island County Park in Charleston. Regional winners will go to the national competition sponsored by the American Society of Civil Engineers. The event is free and open to the public.