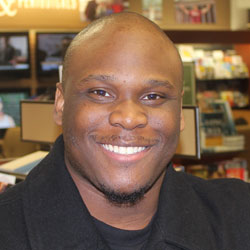 If you had known him several years ago, it might have been all too easy to picture Davontae Singleton becoming a high school dropout.

He was attending a failing middle school in Charleston with high turnover among the teachers and dozens of his classmates who had simply given up. Singleton made it through, but his first semester in high school was a rough transition.

“I couldn’t coast anymore. I had to learn how to study and ask questions and all of the basic stuff I should have known already,” he said. “It was very challenging for me.”

But he persevered, graduated and became a first-generation college student at the University of South Carolina in the Opportunity Scholars Program. Singleton, an English and secondary education major and now an Honors College student, has thrived, not merely survived, in the college environment.

In addition to his regular academic commitments, Singleton has been executive director of the Waverly Center After-School Program, president of Students for Big Brothers Big Sisters, president of the Carolina chapter of No Kid Hungry, vice president of community service for the USC Connect Student Representative Board — and the list goes on.

“One thing that I have learned throughout my time at USC is the importance of reflecting on what I have done,” says Singleton, who plans to finish his bachelor’s degree in May 2015 and his master’s of teaching degree the following year. “If you don’t take the time to reflect on what you have done, I think you stand a chance of forgetting the real meaning of why you did what you did.”

Singleton never forgets that he wants younger children, especially those struggling in underachieving schools like the one he attended, to know their options: “College is an option, being successful is an option and life outside of what they grew up in is also an option.”

Singleton is one of three Carolina finalists this year for the national Truman Scholar award and has set his sights on becoming a high school English teacher.

“I think teaching isn’t something you should pursue only because you think you’d be good at it. It’s got to be a passion,” he said.

He puts Althea Counts, associate director of TRIO Programs and coordinator of the Opportunity Scholars Program, in that camp, as well. And Helen Doerpinghaus, a vice provost, has provided valuable advice on how to make learning a lifelong pursuit.

“All three of them have helped me to know my university is really behind me. That’s why I love this university,” he said.

Eventually, Singleton wants to return for a master’s of education degree in leadership and administration to become a school principal. From there, he envisions earning an educational doctorate and pursuing a career in educational policy, perhaps as a superintendent or even as a secretary of education.

“I was given many opportunities and was fortunate enough to have great parents and mentors to help me with those life decisions,” he said. “If I ever come across a child who doesn't have that support, I have dedicated myself to help them just as someone took the time to help me.”

Davontae Singleton is just one of our Truman Scholar finalists. Read about Andrew Kovtun and Andrea Eggleston.