Unlocking a mystery for HIV patients 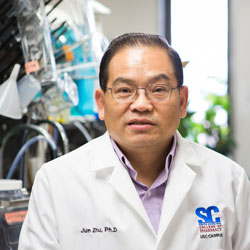 USC pharmacy faculty member Jun Zhu is the type of researcher who often takes his work home. Since his current project holds the potential to improve the lives of millions of people with HIV, he plans on keeping it that way.

“This is not a 9-to-5 job. I think about my research throughout the day, and sometimes it’s difficult to turn that off when I get home,” he says. But having been a clinical physician  in China, he says he experienced firsthand the need for good scientific research to improve the lives of patients. That's why he now feels an urgency to his work, even if means sacrificing some weekends.

This summer Zhu was awarded a five-year, $1.8 million National Institutes of Health (NIH) /National Institute on Drug Abuse grant to explore the mechanisms of cocaine-addiction related to neurocognitive disorders in HIV patients. His previous research has focused on how nicotine use affects dopamine transporters in the brain.

Although that may sound like a big departure to his current research, Zhu’s grant is representative of the fact that government agencies like the NIH are placing a premium on interdisciplinary research that looks for novel solutions to problems. “I started my independent research work on HIV in collaboration with Rosemarie Booze in the department of psychology after I came to USC,” he says. “Problems do not exist in isolated fields, and research shouldn'’t either, which is why I think the change towards more interdisciplinary research is a positive one.”

Pharmaceutical research has played a big role in the fight against HIV/AIDS. Modern drugs developed over the past decades have greatly enhanced the prospects of patients with HIV infection by working to effectively preventing virus replications. Unfortunately, many with HIV infection still suffer neurocognitive disorders, ranging from facial tics to severe dementia. Such HIV associated neurocognitive disorders, called NeuroAIDS, are more serious and common--as high as 70 percent-- with patients who also use illicit drugs, such as cocaine.

That’s where Zhu’s research comes in.

He is currently collaborating with another researcher at the University of Kentucky to develop advanced approaches that integrate computational modeling with molecular pharmacology to examine how cocaine and HIV-associated proteins work to create binders that derail normal brain functions, specifically, dopamine transporters. The belief is that neurological problems experienced by HIV patients are directly linked to these roadblocks.

The hope is that if we can better understand those disruptions, new “smart drugs” that act as traffic cops can be developed, clearing the way for normal dopamine transport. Those treatments could help all HIV patients, not just those with chemical addictions.

In the meantime, Zhu’s lab also is exploring new theories about why some people may be more predisposed to addiction than others, and whether preemptive treatments could stop people from becoming addicted in the first place.

That may seem a lot to tackle at once, but Zhu says the reason he’s at USC is to pursue those bold and novel ideas.

“I probably could go work for a pharmaceutical company and make more money,” he says. “But I get to ask interesting questions and find solutions that may mean the difference of life and death in some patients--no amount of money can give me that kind of work satisfaction.”