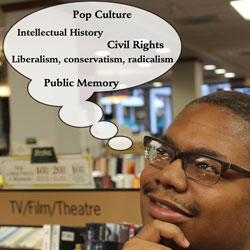 A doctoral student in history is thinking about big ideas — and writing about them on a national blog.

Robert Greene enjoys thinking about big ideas, which are the stock and trade of intellectual history — the focus of his doctoral studies at USC.

But beyond merely thinking about such things, Greene’s ability to articulate his ideas in an engaging fashion has earned him a prestigious forum. He’s now a regular contributor on the Society for U.S. Intellectual History’s blog site.

His posts appear every Sunday and have focused on some of the big ideas of the late 20th century such as public memory, the civil rights era, pop culture and radical, conservative and liberal viewpoints. It’s heady stuff for a second-year doctoral student and one of USC’s Presidential Fellows: Greene’s fellow bloggers include history professors from around the country.

“One of the reasons I’m doing the blog is to think out loud and to incorporate some of those thoughts, once they’ve been refined, into my dissertation,” said Greene, who earned a bachelor’s in creative writing and a master’s in history, both from Georgia Southern University, before starting work on a Ph.D. in history at USC.

One of the fringe benefits of being a contributor to the intellectual history blog site is quality feedback, Greene said, adding that criticisms and observations come from other historians and have proven to be quite helpful, he said. “It’s a community of scholars who read the blog. No one has an ax to grind, but there are some very lively discussions sparked by our posts.”

Greene focuses on 20th-century African-American intellectuals — individuals such as Harold Cruse, Albert Murray and James Baldwin — political history and the U.S. since 1965. He’s also interested in public memory and its relation to actual events.

“One of the questions I’m asking is how do we, in the 21st century, remember the civil rights era and desegregation?” Greene said. “I’m studying how different black intellectuals have constructed that memory, with some focusing on the radical elements and some remembering the inclusivity of that era. We have to remember that memory isn’t the same as history.”

Greene credits several professors, including history faculty members Bobby Donaldson and Marjorie Spruill and journalism professor Kathy Forde with helping him find his way in his first year. “After taking courses and talking with them, I began to realize that intellectual history was what I wanted to do,” he said.

As a student of intellectual history, Greene will continue to think every day about the big ideas of the latter half of the 20th century — and post his thoughts on the Society of U.S. Intellectual History’s blog every Sunday.

Check out Robert Greene's blog on the Society for U.S. Intellectual History's blogsite.

Want to support students like Robert Greene through the Presidential Fellows program or other scholarship programs? Visit Carolina's Promise.