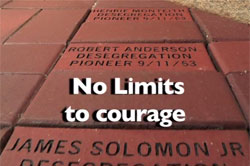 My Carolina presents Henrie Monteith Treadwell and James L. Solomon with engraved bricks as part of the 50th anniversary of desegregation.

When Henrie Monteith, James L. Solomon and Robert G. Anderson walked up the steps to USC’s Osborne Administration Building on Sept. 11, 1963, to register for classes, they were not greeted with applause or warm wishes from community dignitaries. The main goal then was to keep the occasion decidedly low-key.

Fifty years to the day later, Monteith (now Treadwell) and Solomon walked those same steps and were instead greeted like returning heroes. The two (Anderson has since died) came back to campus to participate in day of celebration and reflection as USC’s commemorates the pioneering spirit of the first African-American students since Reconstruction to enroll at USC.

The day began with a ceremony on the steps and a dedication of a new garden next to the Osborne building. Events also included an engraved brick dedication on the Horseshoe and a presentation by former United Nations Ambassador Andrew Young at the Koger Center.

Monteith, whose lawsuit paved the way for the desegregation of USC, thanked those who prepared her for what might have been a tumultuous start at the campus. Those included friends, family, civil rights advocates and students from other campuses around the country. “So many people walked up those steps with me—carried me up those steps,” she said. “I was confident, I was supported, and I’m still supported.”

USC President Harris Pastides praised the three for making “right a grievous wrong” and said their enrollment has undeniably changed the university for the better. “There were only nine steps for everybody else who entered Osborne on that day, but they were a mountain for these African-American students.”

USC Board of Trustees chairman Eugene P. Warr, who earned his accounting degree from USC in 1981, said students of his era owe a huge debt to the three.

“Students Anderson, Monteith (Treadwell) and Solomon exhibited courage when they arrived at USC in 1963. When I arrived in the late ‘70s USC was a significantly changed place and has continued to move forward since that time. We have made great strides and will remain diligent in encouraging diversity throughout the university.”

Solomon said he was proud to be part of Wednesday’s commemoration and, as someone who grew up during the Jim Crow era, said he’s witnessed rapid changes in American society. But he also noted that much work still needed be done.

Citing poverty, barriers to voting, lack of educational opportunities and lingering racism, he said there are many modern-day obstacles to true equality.

“I think we must remember and embrace our history so as to not repeat it,” he said. “While I will not be here to witness it, I hope that before the end of the next 50 years—no, I’m going to change that—by the end of the next 10 years, South Carolina will celebrate real racial harmony and prosperity for all of its citizens.”

Finney, whose father served as the first African-American justice of the S.C. Supreme Court since Reconstruction, said she hopes the garden will become “a place where you can possibly change your heart. I know it’s going to take a heart change before we get to the next step up.”