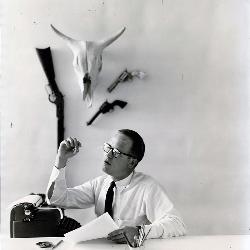 The papers of crime fiction writer Elmore Leonard are coming to  University Libraries at UofSC.

Elmore Leonard spent more than six decades writing – from 1950s Westerns to gritty crime novels to screenplays for popular movies. And the life’s work of the man known as the master of American crime fiction now belongs to the University of South Carolina Libraries.

The complete Elmore Leonard archive includes more than 450 drafts of manuscripts, short stories and screenplays, typed on his signature yellow paper. It features all of his 45 novels, magazine pieces, appointment books, extensive research files, letters, photographs, director’s chairs from movie sets, his National Book Foundation award for distinguished contribution to American letters, his desk and typewriters. There are even a few of his Hawaiian shirts and a pair of sneakers. In all, the collection includes 150 boxes holding 2,400 linear feet of documents.

“It is a tremendous archive in its completeness in terms of manuscripts, correspondence, books and translations. It has all of the materials that Elmore kept, including outlines of how his books were written,” Dean of Libraries Tom McNally said. “The key is that this is a research collection and it will lead to publication of books, articles and dissertations about Elmore Leonard.”

Leonard, a long-time Detroit resident who died in 2013 at age 87, was known for his ability to write strong dialogue within his realistic and well-researched stories. His best known novels are “Out of Sight,” “Freaky Deaky,” and “Get Shorty,” and he began his career writing Westerns, including the short story “Three-Ten to Yuma.”  He also is known for his “10 Ten Rules of Writing," published in The New York Times in 2001. His advice includes “Try to leave out the part that readers tend to skip,” and finishes with: "My most important rule is one that sums up the 10: If it sounds like writing, I rewrite it."

Otto Penzler, writer, editor and publisher of mystery fiction and proprietor of The Mysterious Bookshop in New York City, said Leonard’s influence on the genre cannot be overstated.

“The past 25 years or so has been a great time for American hard-boiled crime fiction. Everybody has a favorite…but the one unifying name that everybody admired, that everyone wanted to emulate to the degree that they could, was Elmore Leonard,” Penzler said.

The element of Leonard’s work that influenced so many writers was his ability to write short, succinct dialogue and to inject an underlying tone of humor, even in violent situations, Penzler said.

Leonard began his career as an advertising writer in 1949, getting up two hours early each morning to work on writing Westerns.  In the 1950s, Leonard wrote 30 Western short stories and five Western novels, selling the movie rights to two. He quit his ad job to write full time. As the market faded for Westerns, Leonard switched to crime fiction. He won the 1984 Edgar Allan Poe Award for Best Novel for “LaBrava,” and his novel “Glitz” reached The New York Times bestseller list in 1985.

Many of his books were adapted into motion pictures. Among his best known works are “Get Shorty,” “Out of Sight,” “Hombre” and “Rum Punch,” which was adapted for the movie “Jackie Brown”. He also wrote short stories that became the films “3:10 to Yuma,” and “Fire in the Hole” which became the FX television series “Justified.”

This year’s film, “Life of Crime,” directed by Dan Schechter and starring Jennifer Aniston and Tim Robbins, is based on Leonard’s novel “The Switch.”

“He was the master of his genre,” said Elizabeth Sudduth, director of the Irvin Department of Rare Books and Special Collections at Carolina, where the archive will reside. A display of parts of the collection will be open to the public through October. The full collection is being archived and will be available to researchers and fans in about 18 months.

“Elmore Leonard produced an immense body of work: short fiction, novels, screenplays.  Westerns, thrillers, crime, urban noir, and what used to be called black humor. Dialogue as good as or better than that of George V. Higgins or Hemingway (whom he cited as an influence). From the protagonists of '3:10 to Yuma' and 'Valdez is Coming' to Raylan Givens of 'Justified,' his characters were realized on the screen by the likes of Paul Newman, Robert Mitchum, Glenn Ford, Burt Lancaster, John Travolta and George Clooney,” said David Cowart, the Louise Fry Scudder Professor of Humanities at the University of South Carolina. “Leonard was as prolific as Stephen King or Charles Dickens (to whom he is sometimes compared), and his papers are additional jewels in the University of South Carolina Libraries' Special Collections crown.”

The Leonard archive, added to the University Libraries collections of George V. Higgins and James Ellroy, establishes Carolina among the premier research centers for crime fiction.

“It’s our intent to be the finest collection of crime fiction in the world,” McNally said. “Two collections now being pursued will make us the indisputable center for the study of this form of fiction. This is the ‘Year of Crime Fiction’ in our library.”

Carolina was not the only library that was pursuing Leonard’s archives; two other major universities were involved. But it was Elmore Leonard’s choice that his archives come to the University of South Carolina.

Although Leonard had no connection to Carolina, he told his son Peter Leonard he wanted his papers to go to the university following a visit shortly before his death. Leonard was awarded the university’s Thomas Cooper Medal in 2013. While he was in Columbia, McNally suggested a tour of the rare book department. Leonard was especially captivated by the library’s extensive collections of Ernest Hemingway and crime fiction writer George V. Higgins

“He went to visit the library and he was blown away,” Peter Leonard said. “Elmore was a major Hemingway fan. He was the influence that got my dad to write.”

Then Sudduth showed Leonard the university’s Higgins collection, including the manuscript for “The Friends of Eddie Coyle.”

“That got dad’s attention. That book set my dad free. It really changed his outlook on writing. George Higgins was free with characters and dialogue. Hemingway and Higgins were the two influences in my father’s life,” Peter Leonard said.

The next day on the plane back to Detroit, Elmore Leonard told his son: “That’s where I want my papers to go.”

“I agreed. It’s an incredible place. What also helped was the hospitality, the friendliness of everyone,” Peter Leonard said. “That, and Hemingway and Higgins.”