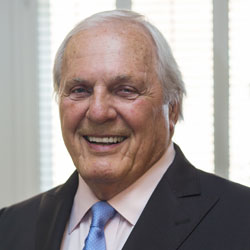 Jim Konduros, a 1954 law alumnus with a penchant for public service, has given the School of Law $1.1 million for student scholarships, fellowships and leadership development.

A longtime adviser to government officials and Fortune 500 businesses has made a $1.1 million gift to the University of South Carolina's School of Law to provide students with scholarships, fellowships and leadership development.

Jim Konduros, a 1954 law alumnus credits the law school for helping him develop the strategic thinking and counseling skills that guided him through a rewarding career that included working with U.S. Sen. Olin Johnston and Gov. Bob McNair, advising major companies and serving as counsel to a hospital system CEO and leading several nonprofit organizations.

"The Moore School of Business is tops in the nation, and many of Carolina's science and engineering programs have achieved great acclaim," Konduros said. "The stars are now aligning for the law school with a first-rate building soon to be under construction and the university president's dedicated support. I'm hopeful this gift will be part of the catalyst to put the last critical part in place: the alumni of the law school pledging their support. It is their time to contribute to the celebration."

"He dedicates his talents and training to benefit the public good," Pastides said, "and serves as a tremendous example for our graduates to emulate. His generosity will enable our law school to have a lasting impact by preparing students for a life of public service and leadership."

In addition to the scholarships and fellowships, law students will benefit from a leadership development program. Students will learn and read about effective management and governance, engage in discussion with respected leaders and complete a project that demonstrates the leadership principles they learn.

Konduros' gift comes at an exciting juncture in the School of Law's history. The state's flagship law school is hiring new faculty, expanding its curriculum, refining its focus and breaking ground on a new building that is projected to open during the school's 150th anniversary year in 2017.

Dean Robert Wilcox describes Konduros' gift as an expression of confidence in the future excellence of the law school and its students.

"This generous gift to our law school comes at a wonderful time and builds upon the commitment of our law school to graduate lawyers who value public service and are as fully prepared as any in the country to serve as effective leaders in their communities," Wilcox said.

Beginning in fall 2015, two incoming law students will be named Konduros Scholars, with a single award made each year thereafter. Each scholarship will support three years of study. The Konduros Public Service Fellowship Program will be available to university law students who qualify for work-study funds and who want to gain legal experience working in public sector. Four to eight fellowships will be awarded annually.

Konduros, a native of Anderson, S.C., retires this year from what he calls his "passion career," where he has spent the past 25 years overseeing millions in grants to the less fortunate as the chairman and CEO of several nonprofit organizations.

His journey in public service began in the early 1960s as aide to Sen. Johnston and advocate in the war on poverty, which he continued as a key member of Gov. McNair's staff. He brought together the S.C. Highway Commission and Appalachia Commission to construct the 72-mile Cherokee Trail (S.C. Hwy. 11) through the state's foothills. He also helped create the Appalachian Community Service Network, an educational cable channel that later became The Learning Channel.

After Gov. McNair's term ended in 1971, Konduros joined a new law firm created by McNair, developing and supervising a governmental affairs practice. During his 20-year tenure with the McNair Law Firm he advised Westinghouse in its successful bid to assume operations at the Savannah River Site and helped Palmetto Health CEO Charles Beaman navigate the merger of Baptist Medical Center and Richland Memorial Hospital.