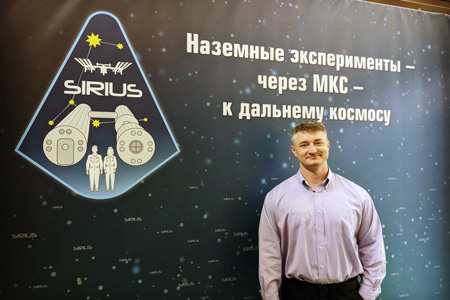 Two-time UofSC graduate William Brown has been selected to be part of a NASA spaceflight simulation study in Moscow.

How long can a crew of astronauts live together and complete rote, and at times mundane, tasks without wanting to strangle each other?

That is a question University of South Carolina graduate William Brown is hoping to help answer as one of two U.S. members of a NASA spaceflight simulation study.

Brown, 2011 Russian and Islamic Cultures Studies and 2020 Master of International Business, will be part of a multinational crew of six people who will live together in isolation for eight months in Moscow and who will experience aspects of social isolation and confinement during the simulation.

By studying the crew’s interactions, health and physiology during confinement, NASA researchers hope to learn how to better prepare future space crews for long-term missions to the moon or even a manned flight to Mars.

“Our mission is actually meant to simulate a lunar mission,” Brown says. “So basically, we have the capsule and then we have an entire section of the facility designed and closed off to be like the moon.”

Much of the research done while the crew is in isolation will focus on behavior, resilience and other mental health issues. One study will look at how a person can become so absorbed and invested in a set of tasks they have been assigned that they can find it difficult to switch to another task. There is a whole study that looks at menu fatigue — a loss of appetite and willingness to take in essential nutrients because of a lack of variety in food offerings.

I think we have a public duty to contribute to these things when and where we can. I'm one of those people who luckily can.

Brown says the only thing in his past that he can compare the experiment to is deploying to Iraq — or even perhaps the recent isolation that came as a result of the coronavirus pandemic.

“The risks are vastly lower than going to a combat zone, but you're still there with your unit, you're very close and you're trying to take your teammates as they are,” he says. “How do you adapt and compromise to get what you need to get done?”

The isolation element, he says, is oddly pertinent to the recent worldwide quarantine.

“So many people have been isolated over the past year and a half. We're all living with our significant others and family very closely. You have to understand that some behaviors will change — some won't.”

It is that military background coupled with engineering experience from the working world and language skills that Brown says likely landed him a spot on the crew.

“Obviously, there are only a select few people in the country with that specific background,” he says. “Part of my first interview was in Russian, which I speak Russian fluently because that was my major at USC.”

Brown’s military service came in the middle of his college studies, when he left school to join the Army in 2005. He added Arabic to his list of languages and was assigned to an infantry company, helping communicate with the residents his unit encountered. 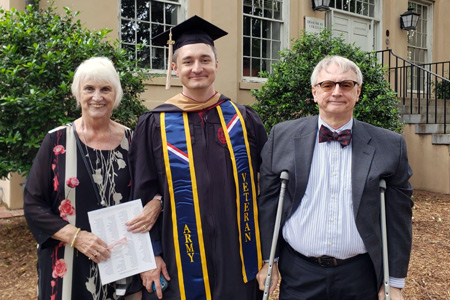 William Brown stands with his parents on graduation day. The two-time UofSC graduate interrupted his undergraduate studies to serve in the U.S. Army.

After three years, he returned to Carolina and continued to serve in the Army Reserve while he finished his degree. He credits Judith Kalb, director of the Russian program and Russian professor Alexander Ogden, with helping him find his focus and finish his degree.

“They helped me set up my schedule. They talked about what I needed to focus and graduate,” he says. “They are absolutely invested in, not just the Russian program itself, but also their students. They really went out of their way to help me.”

That assistance, along with the university’s National Fellowships and Scholar Programs, helped Brown win a prestigious Boren Undergraduate Scholarship that allowed him to study in Kyrgyzstan for a year.

“They were just absolutely invested in my outcome as a student and I'm going to be eternally grateful for them for that,” Brown says.

To complete the requirements of the Boren Scholarship, Brown worked a year with a government agency after graduation. He has worked in various industries, consulting with government agencies in the U.S. and internationally. He has had training in computer software and engineering and, three years ago, decided to put all the pieces together when he came back to Carolina to study in the Master of International Business program.

He finished that degree in COVID-scarred 2020 and was looking around for what’s next when a friend suggested he apply for the NASA program.

So why would anyone — particularly for someone who just finished a business degree in one of the nation’s top-ranked programs — sign up to be locked away for eight months with five strangers?

“I think it kind of captures the imagination,” Brown says. “There’s a little bit of the unknown when you're doing something like this: You don't know how you're going to react, how the other people are going to react and you kind of like to test yourself.

“Plus, it's a really, really cool way to kind of step in and advance some small increment of human knowledge. I think we have a public duty to contribute to these things when and where we can. I'm one of those people who luckily can.”