This spring, as COVID-19 spiked in New York City, the nation’s largest metropolitan area became the face of the U.S. pandemic. Sixteen confirmed cases on March 9 mushroomed to 72,181 by April 6, and the official death toll was just as staggering — surpassing 24,000 by May 2. In response, nurses from across the U.S. descended on the region, enduring personal hardship and risking their own health to help stem the tide.

Housed in Times Square hotels and bused to area hospitals each morning, they pulled 12-hour shifts, often seven days a week. They witnessed death after death and consoled countless grieving family members. Between April and June, Carolinian reached out to three University of South Carolina College of Nursing alumnae who answered the call — and showed the rest of us what it means to rise to the occasion.

'Just to be able to breathe' 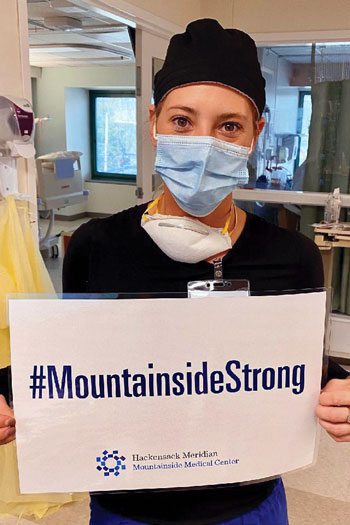 College of Nursing alumna Rosina Fadul went to the New York City area to help in the early bleak days of the COVID-19 pandemic. "After every medical attempt had failed, I would just go in the patient’s room and hold their hand until they passed away."

Born in the Bronx, raised in Murrells Inlet, S.C., Rosina Fadul has worked as an oncology travel nurse for three-and-a-half years. She was in Hawaii when the virus hit Italy, Washington State and New York. She wanted to help patients, obviously, but also her fellow nurses — or as she calls them, “the sisterhood.”

“My heart seriously broke for the nurses, how much they were struggling,” says Fadul, who completed her BSN in 2015. “I realized, ‘I have the ability to make a difference, to help take off some of the burden.’ ”

She arrived in New York April 8. Originally assigned to the hospital at NYU, she asked to be reassigned to Mountainview, a small community hospital in Hackensack, New Jersey, just on the other side of the Lincoln Tunnel, reasoning that neighboring communities were equally overwhelmed.

She was right. All three 16-bed ICUs at the hospital were full, and the next floor was serving the same function. All the patients looked the same, too: intubated, on ventilators and multiple critical drips, turned on their stomachs and facing the same grim prognosis.

“In our entire unit during my first two weeks every patient died,” Fadul says. “And it had been like that for two to three weeks prior to me getting there. The staff was used to it by that point, they had developed procedures, but we were all just grasping at thin air.”

As an oncology nurse, Fadul has plenty of experience with death, but this was different. With COVID-19, loved ones were unable to visit, leaving nurses to communicate with families via text and video chat.

“It made me want to go the extra mile,” she says. “After every medical attempt had failed, I would just go in the patient’s room and hold their hand until they passed away. I finally just broke down one Saturday and started crying, like, ‘When do we get a win?’”

Eventually, she did. A 30-year-old male who had been intubated four separate times and coded more than once was transferred to a rehab facility. But most ICU patients were not so lucky, even after seeming to recover. The first to be successfully extubated and discharged from her unit was readmitted just weeks later, suffered a stroke and died.

In May, Fadul transferred to a long-term acute care facility in Boston, where she would witness the aftermath of COVID-19: the neurological damage, the long road to recovery. Asked how the virus has changed her, she goes back to that Saturday when she finally broke down.

“For the first three weeks I had headaches from wearing a mask all day,” she says. “That day, I went outside and took the mask off and the air just felt so crisp. I’ve always appreciated the small things in life, but after everything those first few weeks I was thankful even just for oxygen, just to be able to breathe.”

'You can survive this' 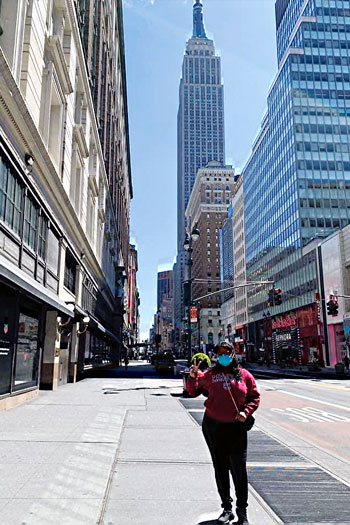 UofSC alumna Alesia McFarlin went to help in New York after surviving COVID-19. "I was able to say, ‘Look, I survived this. You can survive this, too.’ ”

Simpsonville, South Carolina, native Alesia McFarlin, DNP, BSN, FNP, knew what COVID-19 was like before she encountered her first patient. She and several family members in the Greenville-Spartanburg area contracted the virus in early March. “I did my 14-day quarantine and still wasn’t feeling good,” she says. “I had the fever, chills, body aches. I could barely walk.”

The experience motivated her to contact a placement service, which found her a temporary position at Lincoln Medical Center in the Bronx. She arrived in New York on April 5 and was still there when we reached her near the end of the month: unwinding at her hotel midway through another 84-hour work week.

But while her own illness may have helped prepared her to work with patients suffering from the virus, the pandemic’s scale and rapid spread presented additional challenges.

“When I first landed, the airport was completely empty, eerie. I thought, ‘OK, this is really happening,’” she says. “And then my first day at the hospital I was a little nervous. You were just thrown into it. Even if you weren’t an intensive care nurse, that’s where you were needed so you just have to jump into the action.”

In McFarlin’s case, that initially meant working with an attending physician handling both COVID and non-COVID patients, but she soon moved to the research department, where she joined a team running clinical trials on potential virus medications, including Sarilumab and Remdesivir. She is still involved in patient care — “I draw blood for clinical trials, and I do antibody testing of healthcare workers and nasal swabs” — and she has seen firsthand how fickle the virus can be.

The work affects each nurse a little differently, too. For McFarlin, the 12-hour days are long, but she combats the fatigue with vitamins and plenty of sleep. She maintains her mental health through prayer.

“I’m very spiritual,” she says. “I listen to a lot of gospel music. I pray before I get on my bus. And they have on-hand mental health counselors 24/7. We really have a lot of support, a lot of uplifting people.”

'Together for the same mission' 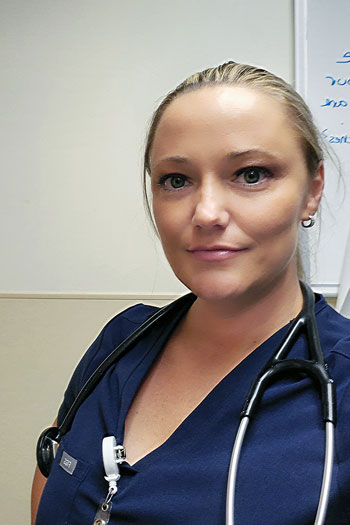 Stephanie Munoz earned her master's in nursing from UofSC after serving in the Air Force and working as an ICU nurse for 12 years. "It was chaos, but it was organized chaos. There were doctors from all over — neurosurgeons working as ICU doctors. The camaraderie and teamwork were amazing."

When we catch up with nurse practitioner Stephanie Munoz in June, she is enjoying a well-deserved vacation in Florida following several hectic weeks at Bellevue Hospital in Manhattan. Hilton Hotels is hosting her family — and the families of many other nurses, in fact — as a thank you. She is using the time to reconnect with her husband and three kids, to recharge and reflect.

“You don’t really think about it while it’s happening. You don’t cope with it. You just do it,” she says. “Coming back was really when I had to sit back and process what had happened.”

Like Fadul and McFarlin, Munoz worked 12-hour shifts for weeks on end. She would board the charter bus outside her Times Square hotel at 6 a.m. and not get back until close to 9 p.m. — just in time for a late dinner, a shower, maybe a little television, then bed. During a 21-day stretch, she got two nonconsecutive days off.

“It was completely intense,” she says. “It was chaos, but it was organized chaos. There were doctors from all over — neurosurgeons working as ICU doctors. The camaraderie and teamwork were amazing. I don’t know if you can ever be prepared for something like this, but it was also really nice to see all of these people from all over come together for the same mission.”

As an example, she describes the work of the “proning teams,” whose sole job was to come through the ICUs turning patients onto their stomach and then onto their back every eight or nine hours, over and over.

“It doesn’t sound that complicated, but when a patient is connected to a million different tubes and IVs and a breathing machine, it’s not easy,” she explains. “The hospital utilized their staff and resources so well. It was busy and chaotic, but we just did it.”

And the experience paid personal dividends for Munoz, who welcomes big challenges. It’s why she joined the Air Force when she was 21, became an ICU nurse when she got out, and after 12 years in the field enrolled in the MSN program at UofSC’s College of Nursing. She was in the final semester of the adult gerontology extra care nurse practitioner program when she signed up to go to New York. She graduated just days before our interview — “virtually!” she says with a laugh. Her time at Bellevue, though, is still fresh in her mind.

“It brought me back to what I really want to do. It helped shape my trajectory toward urgent care and ICU,” she says. “I’ve had people say, ‘Take whatever job you can get,’ but no, I don’t want to do a job that I’m not really passionate about. The whole New York experience really reminded me why I do what I do and why I love what I love.”

This story was also published in Carolinian, the University of South Carolina’s alumni magazine, which is distributed to members of the UofSC Alumni Association. Get on the Carolinian mailing list by joining the association or by making a gift equal in value to membership dues.