For the past 40 years, women have outnumbered men in the University of South Carolina's student body. But the history of women on campus goes back to the institution's beginning, long before women were even allowed to attend.

Show Notes
Thee Big Spur, the reincarnation of the Garnet & Black yearbook set to come out this spring as a coffee table book

“C is for Co-ed, that creature divine, Oh, Lordy, I tell you they think they are fine!”

[flourish of ragtime piano, continuing underneath the narration]

I’m Chris Horn, your host for Remembering the Days, and today we’re surveying the history of the university with a particular focus on women — when they first arrived on campus, how they were treated, and how the university ultimately changed as a result.

South Carolina was chartered in 1801 and opened its doors to students in 1805, but the doors were open to only part of the population — white men. It wasn’t until 1893, 88 years later, that the state legislature passed a law requiring the university to admit women. The impetus for doing that was simple, enrollment had dropped during a severe economic recession, and the governor – who had not always been a friend of the college – simply thought that it would be a good idea for women to get an education here. It would be another 70 years — in 1963 — before a similar enlightened attitude permitted African American men and women to enroll.

Elizabeth West, the university archivist, says the decision to admit women was, at first, not particularly popular on campus.

West: The faculty, the administration and the students were not in favor of women being admitted. Not in favor of coeducation. There were women’s colleges in the state and the thinking was that the separation of the genders would be best as far as higher education. There’s the feeling that what kinds of jobs were they going to do? They were going to get married and have families so did they really need to be here with the male students who would be going into their careers and finding their jobs?

Well, OK, that was the sentiment in the 1890s and, if we’re honest, for a few decades after that, as well. The first woman to enroll at Carolina was Frances Guignard Gibbes in 1895. She didn’t graduate, but she went on to a very successful career as a poet and playwright. The first to earn a degree was Mattie Jean Adams in 1898. By 1899, there were almost 20 female students at the college, and they had already formed the Co-Ed Club, whose charming motto was “Woman is the better man.”

When you read through that 1899 edition of the Garnet & Black, you get the sense that the male students might not have agreed that female students were better than them but would have readily acknowledged that they were every bit as smart. It was the administration and the professors — all of whom were male, of course — who didn’t share that sentiment.

West: Once women students started enrolling, one faculty member was quoted as referring to them as a monstrous regiment of women. They really didn’t think they could keep up with the male students academically and would be frivolous and distracting for the male students.

So, even though South Carolina had begun admitting women, it didn’t roll out the welcome mat. In fact, the campus wouldn’t open dormitory space for women for another 20 years or so — it was in one wing of DeSaussure College — and that was their way of keeping female enrollment low. Women had to find a boarding house near campus ­— a more expensive option — if they wanted to attend.

But, let’s back up for a moment because the history of women at Carolina actually goes back to the beginning, 1805. They weren’t students, but the wives and daughters of professors lived on the campus and so did enslaved women who helped cook and clean.

For a brief time in the 1870s, during Reconstruction, African American women were enrolled in what was called the State Normal School, a program to train school teachers. The Normal School wasn’t technically part of the university but it was housed in the Rutledge College building.

Well, now let’s fast forward to the early 20th century, to World War I when women began to make their presence felt a bit more at Carolina.

[music from that era — maybe the first line from “Over there” ?]

West: WWI proved to be a major tipping point for women’s enrollment at the university. The university had to make up some of its tuition and enrollment when male students were leaving to join the U.S. armed forces to participate.

The university built Wade Hampton, its first dorm exclusively for women, in 1924. At the same time the university hired its first dean of women, Irene Dillard, along with a few female professors, mainly in literature and the arts. By the end of that same decade, female students would make up about one-fourth of the total enrollment. Women at Carolina were on a roll …

but it didn’t last. During the Great Depression in the 1930s, the university placed restrictions on women’s admission — the thinking was that it was more important for men to be in college so they could get their degrees and find work during those years of extremely high unemployment.

That sounds quite sexist by today’s norms, but, that was the thinking 90 years ago. When World War II erupted a few years later, women made up most of the civilian student population on campus. One quick sidenote, beginning in 1981, women outnumbered men at Carolina for the first time, and it’s been that way ever since.

Enough about enrollment — what about Carolina women and sports? These days we’re accustomed to Coach Dawn Staley and her women’s basketball team competing for national championships, but things didn’t start out that way. When women’s teams here began playing more than 50 years ago, they didn’t have the same funding and professional staffing as the men’s teams.

West: If they wanted to travel to play in a tournament or at another school, they would often have to have car washes and bake sales to raise the money to do that. They had second hand equipment, they didn’t have professional trainers or medical personnel or anything like that for the teams, until Title IX was passed and that brought the more equal footing as the male teams had in funding and personnel and coaches and things like that. That was really a turning point in terms of moving women’s sports into what we think of today.

It's important to note that Title IX was not only about women’s equity in athletics. The law, enacted in 1972, also addressed treatment of women in the workplace — things that we take for granted today, like allowing a woman to take maternity leave rather than resign if she became pregnant. What a novel idea, right?

We’ll wrap up today’s episode with Vicki Eslinger who was at the forefront of the struggle for women’s rights in the late 1960s and early ‘70s as a Carolina undergraduate and law student. She’s perhaps best known for suing the governor and the state Senate when they wouldn’t allow her or other female students to serve as pages in the Senate chamber.

Eslinger: When I got to law school and wanted to be a page and they told me I couldn’t because they would be happy to have me if I was my brother but they just weren’t going to have a girl — they said, no girls — I thought, “You can’t do that.” Our parents had taught us to stand up for what we thought was right and so I brought that lawsuit.

Vicki won the lawsuit, lost some of her high school friends who thought she was being too radical, but never wavered from her commitment to women’s rights and civil rights for minorities. Now, some 50 years later, she’s proud of what she did and thankful for what the university instilled in her.

Eslinger: I came in there — having been a Goldwater girl from high school — and I left as a progressive and I did all of that in my time at a very conservative university that taught me to think and taught me not to accept everything that everybody said or not to accept anything just because that’s the way it had always been. And it taught me that if you’re going to be a leader, do not expect everybody to love you because if you are a leader there will be people who won’t. And that was a very helpful lesson to me.

In the introduction to that 1899 Garnet and Black yearbook, I think the student editors apparently felt like they needed to acknowledge the fact that women had recently joined the student body. So, they stated simply that ‘the experiment of co-education has been satisfactory.’ Of course, more than 120 years later, I think we can all agree that co-education at Carolina has been a resounding success. In fact, the university truly succeeds only when everyone has a seat at the table.

This episode of Remembering the Days is sponsored by “Woman Power! Voices of the Women’s Movement,” an expanding oral history collection at University of South Carolina Libraries that documents women’s 20th and 21st century issues — one voice at a time. Also, be sure to check out “A Woman’s Right,” an exhibit at McKissick Museum on display through December 5, 2020, that explores the history of women on campus.

That’s all for now. See you next time on Remembering the Days, a production of the University of South Carolina. 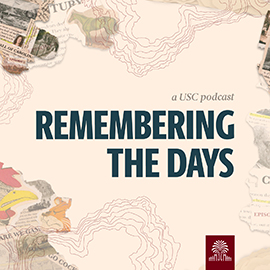 Take a stroll down more than 200 years of memory lane with Remembering the Days, a UofSC podcast.

Subscribe at Apple’s App Store, Google Play or wherever you get your podcasts.