On Nov. 25, students will gather around a carefully engineered and constructed 20-foot wood-and-paper tiger — and set it aflame. The tradition known as Tiger Burn happens every year during Rivalry Week in advance of the football game between the South Carolina Gamecocks and the Clemson Tigers.

Tiger Burn is just one of many traditions fueled by the intense rivalry between the University of South Carolina and Clemson University — a rivalry rooted in politics as well as athletics.

“Clemson and Carolina were immediately set up to be rivals because of the way Clemson was founded,” says Elizabeth West, university archivist at UofSC.

During the late 19th century, South Carolina politicians Benjamin Tillman and Coleman Blease, among others, viewed the state’s flagship university as elitist — a place for wealthy people. To make room for the sons of planters as well as lawyers and to take advantage of federal support for agricultural schools, Tillman helped establish the Clemson Agricultural College with the estate of Thomas Clemson providing the property. The new school initially drew funds and students away from UofSC and led to the university being temporarily “downgraded” to a college.

“We were rivals before sports were ever involved,” West explains. 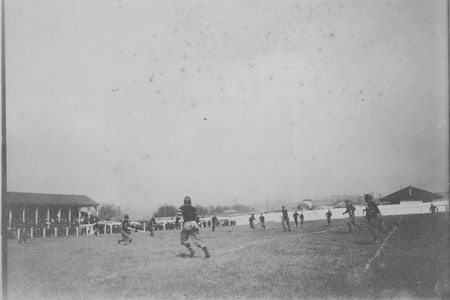 But sports soon followed and the first football game between the two schools was played Nov. 12, 1896 — a Thursday — at the Elmwood Fairgrounds. About 2,000 spectators paid 25 cents to watch the then South Carolina College Jaguars defeat Clemson 12-6.

The tradition of playing on Thursday during the State Fair in Columbia last until 1961 and became known as “Big Thursday.”

The idea of burning Clemson’s mascot began after the 1902 game.

“In 1902, UofSC scored an upset victory against Clemson and, in their excitement, some students paraded around with a drawing of a crowing gamecock over a beaten tiger,” West says. “Clemson students were offended by this, so they warned Carolina students not to carry the drawing in a parade that was happening the next day on Main Street."

“Naturally our students carried the drawing in the parade the next day. Originally being a military school, Clemson’s cadet corps was marching in the parade that day. They had their swords and so forth, so they decided that after the parade they would march onto campus and seize the drawing,” West says. “Newspaper reports say 200-300 Clemson students marched on the campus and when about 40 Carolina students found out about it, they armed themselves with knives and pistols and hunkered down below the low wall on Sumter Street to defend the campus. Fortunately, the police and faculty arrived and no shots were fired, no blood was spilled, and they resolved the situation by burning the drawing between the two groups of students as they cheered at each other. That’s the origin of the tiger burn idea.”

However, that riot led to the game being suspended until 1909, and in the ensuing years, Tiger Burn has taken on a less conciliatory tone.

Newspapers reported on a Tiger Burn as a pep rally in 1920, and since then, the "tigers" UofSC students have crafted have become increasingly elaborate. One of the earliest photos of Tiger Burn from the 1940s depicts a stuffed tiger being carried on a stick like it’s ready to be roasted. Next to it is a student in a homemade gamecock outfit before Cocky became the official mascot in 1980. 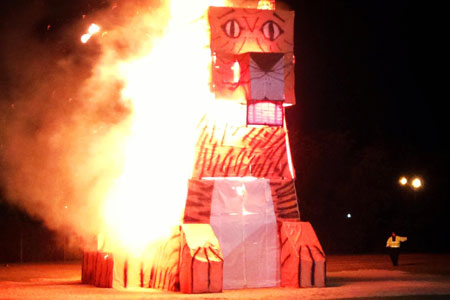 A more recent tiger designed and built by a group of engineering students who participate in the American Society of Mechanical Engineers and the Society of Hispanic Professional Engineers.

More recently, South Carolina's effigy tiger has been designed and built by engineering students who participate in the American Society of Mechanical Engineers and the Society of Hispanic Professional Engineers. Previous tigers engineered by students in these organizations have included moving parts on a body that has extended into the night sky more than 30 feet.

This year, Student Life is leading a campaign with a goal of raising $12,000 to offset the costs of construction supplies, contractual services, security and other event support.

This is the first crowdfunding campaign in the history of the annual event.

Donations to Tiger Burn will allow Student Life to allocate funds toward other student services and campuswide initiatives to enhance the student experience.

The fundraising campaign also allows alumni to relive the excitement of Tiger Burn and to ensure new generations of students can celebrate the passion and community of Rivalry Week, which unites students, faculty, staff and alumni in a longstanding and beloved tradition.

If you’re interested in helping fuel the fire for this year’s Tiger Burn, visit the crowdfunding webpage.

One side note on that original Tiger Burn. That also seems to be the year the Gamecock officially became UofSC’s mascot.

Because a Gamecock was depicted crowing over the Clemson Tiger, newspapers started calling UofSC the Gamecocks. West theorizes that the students originally put the gamecock on the drawing because cockfighting was well known at the time. The gamecock also serves as an homage to Revolutionary War hero Thomas Sumter, who was known as the “Carolina Gamecock.”