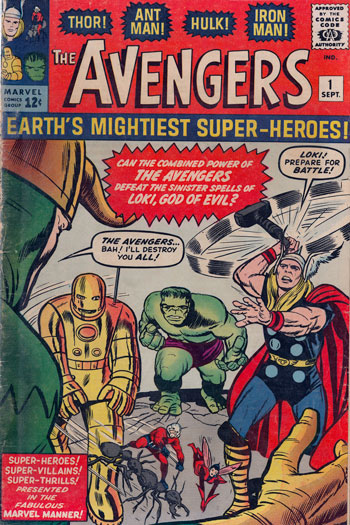 Avengers #1 is just one of the signature items in a massive comic book collection donated to University Libraries by a private collector in Ohio.

The 1963 comic book that started it all, Marvel’s Avengers #1, is one item in a massive collection recently donated to University Libraries by lifelong collector Gary Lee Watson of Columbus, Ohio.

One of the largest collections of its kind, the Gary Lee Watson Comics Collection includes 143,000 unique comics, 20,000 magazines, 15,000 paperbacks and 5,000 pulp publications and other items.

“This is such a phenomenal, transformational gift,” says Elizabeth Sudduth, associate dean of special collections at University Libraries. “This is the work of a committed, lifelong collector. We could have never amassed a collection like this on our own. We are so grateful to Gary for entrusting his amazing collection with the Irvin Department.”

In addition to Avengers #1, other rare and sought after items in the collection include:

It took two trips to Ohio to pick up the collection — with two 26-foot-long moving trucks. Weighing in at about 36,000 pounds, the collection represents all comics genres and publishers and gives the university community access to a significant percentage of all comics ever published.

A comics collection may seem out of sync for the Irvin Department of Rare Books and Special Collections, which is best known for its Audubon prints, medieval manuscripts and Scottish literature, Hemingway, Fitzgerald and Pat Conroy collections. “This is a new direction for us,” says Sudduth, “but this is precisely what special collections are really all about.” 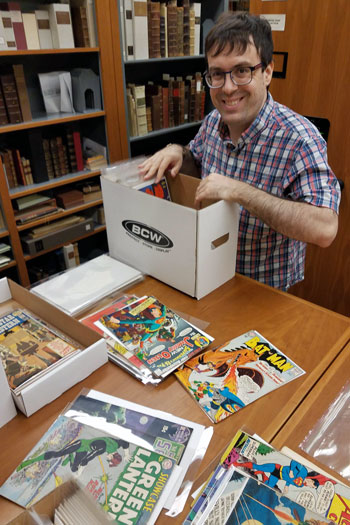 David Shay is a comics fan and expert as well as a cataloger in the Irvin Department of Rare Books and Special Collections.

David Shay, comics fan, expert and cataloger in the Irvin Department, says the collection will serve the campus and research community well — and not just those interested in graphic design, art and publishing.

“Comics are really reflective of American interests and anxieties, so we can learn about sociology, psychology, history, politics, sports and even technology through them,” he says.

“For example, superheroes were popular during World War II and up until the ’50s, when people took an interest in romance, crime and drama. Then that all changed in the ’60s with the Cold War and fears about communism. We all know Spiderman was created when Peter Parker was bitten by a radioactive spider, which certainly reflected fears in the ’60s about nuclear war with Russia.”

While it will take many years for Irvin Department staff members to go through the boxes, inspect each item and catalog the entire inventory, staff members are able to fulfill requests for UofSC classes now. Faculty members and students can contact the Irvin Department and arrange to visit the Hollings Library reading room and work with all but the most fragile items in the collection.

Sudduth says she anticipates a high level of interest in and use of the collection, especially once the semester-long exhibit opens Aug. 29. Michelle Nolan, a journalist and renowned comics and pop culture historian, will be the guest speaker. Nolan authored Love on the Racks, the definitive history of American romance comics, and Ball Tales, a history of team sports fiction in all media from the 1930s to the 1960s.

Sudduth and her staff are also developing a full slate of events in conjunction with the comics exhibit, ranging from talks by comics authors and artists to a Halloween costume contest.

“Comics are universal,” says Sudduth. “Whether you read them as a child, have a favorite superhero or your mother threw out your collection when you went to college — everyone has a comics story.”