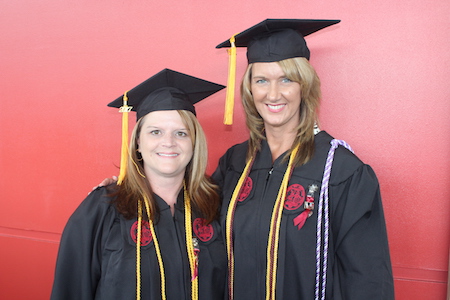 Kristal Tribble and Tina Williamson met in person for the second time at convocation. Buoyed by their experiences in UofSC's online RN to bachelor's of science in nursing degree program, the friends are currently pursuing online master's degrees through the College of Nursing.

As a student in a nursing program in 2005, Kristal Tribble of Laurens, S.C., dropped out of an online typing class in sheer frustration and switched to a course with live instruction. A decade later, enrolling in an online program seemed a far-fetched way for the registered nurse to reach her goal of earning a bachelor’s degree.

But her inner voice said to go for it. The full-time nurse, wife and mother to three school-age daughters was determined to further her education.

Across the state in Georgetown, Tina Williamson wondered if she could summon the strength to go back to school again. She had graduated from high school in 1984 then worked for 15 years as a restaurant manager before staying home to raise three children.

While watching her father battle lung cancer, she began to notice all the ways the hospice nurse cared for him — tending to his medicines and meals, yes, but also making him comfortable, talking to him and reassuring him and her whole family — and Williamson began to consider a career in nursing. She jumped in head-first, earning her CPR certification on a Saturday and starting her nursing classes the following Monday.

That was 2001. Williamson had three children, a husband, a mortgage, car payments, while her classmates were teenagers.

Fast forward 14 years, and she Williamson reached another crossroads. If she wanted to advance her career, she would have to earn at least a bachelor’s degree. But could she really return to the classroom again?

Tribble and Williamson turned to online learning through the University of South Carolina’s College of Nursing's RN to BSN program, which seemed the most flexible way to mesh school with the rest of their lives. Since the program is delivered online, outside of a traditional live classroom, each envisioned it as a test of self-mettle, an exercise of the power of one.

Instead, they found community and friendship, connecting in their first set of classes and sticking together ever since. The pair graduated with the program’s first cohort in 2017.

“We are definitely each other’s sounding boards and motivators,” Williamson says. “Sometimes between our family obligations, our work obligations and our school obligations, it’s really easy to get discouraged.

“But we’re each other’s biggest cheerleaders, and if we get frustrated or feel like we’re going to give up, the other one says, ‘No, you can’t do that. We can get through this. You can do it. You’re almost there.’ ”

I can do anything for seven weeks.

Expanding their knowledge base and practice scope by earning a bachelor’s degree has already paid off. Shortly after graduation, Tribble accepted a position as a nurse manager on an inpatient geriatric psychiatric unit at Mary Black Health System in Spartanburg, S.C. Williamson, likewise, was promoted from the informatics team at Carolinas Hospital System to an associate director position with an orthopedic/neurology unit and joined the hospital’s Leadership Carolinas program, which requires bachelor’s degree preparation.

And because of their success with the RN to BSN program, the pair immediately entered the University of South Carolina’s highly ranked master’s of organizational leadership degree program. Tribble has set her sights on becoming a case manager to help improve the continuity of patient care while Williamson is interested in hospital management with the ultimate goal of becoming a chief nursing officer.

Tribble and Williamson are like many nurses across South Carolina, answering the state’s call to return to the classroom and earn a bachelor’s degree or more. The National Academy of Medicine (formerly the Institute of Medicine), a national nonprofit organization that provides evidence-based health care policies and recommendations, in 2010 issued a report calling for 80 percent of the country’s nurses to have earned at least their bachelor’s degree by 2020. In South Carolina, the state set its goal for 65 percent of the nursing workforce to be at least bachelor’s prepared by 2020, up from 41 percent of the workforce in 2010, according to the College of Nursing’s Office of Healthcare Workforce Research for Nursing.

In response, hospitals and health care systems across the state have begun issuing education requirements for current nurses as well as new hires. For example, new nurses at some institutions must begin a bachelor’s degree program within two to three years of hire and successfully complete it within four to five years, and many employers are offering tuition reimbursement to help offset the cost.

With demand for bachelor’s-level training on the rise, colleges and universities are rolling out programs to meet demand. In a rural state where not all learners live within a reasonable driving distance of an accredited program and where many students must continue to work full time while they are enrolled, online learning has emerged as a key solution.

By the time they finish, they realize 'I have a world out there and I’m going to make a difference.'

Joan Creed, clinical assistant professor in the College of Nursing

Clinical assistant professor Joan Creed has been teaching in the College of Nursing’s online RN to BSN program since its inception. Creed, an online student herself in the college’s doctor of nursing practice program, said many of her students are adult learners who are nervous about returning to the classroom.

“I just encourage them and reinforce that if I can do it — I’ve been out of school for a long time — you can do it,” she says.

Creed said she strives to ensure class material is well organized, with learning activities, objectives and learning resources easy to find. She also designs the course with learning efficiency in mind, searching for the best ways to deliver material using a variety of methods, including videos, reading assignments and group projects. She communicates with students through online meetings, phone calls and emails and encourages students to use the class discussion board where they can help one another and she can answer common questions in one place.

As a professor of community/population health, Creed helps students see the bigger picture of patient health beyond the point of care and how they, as nurses, must evaluate external factors such as income, education level, transportation, and access to health insurance and health care to improve the health of South Carolinians.

She’s been proud to watch her students gain confidence in their abilities and knowledge and in turn seek out new career opportunities. “By the time they finish, they realize 'I have a world out there and I’m going to make a difference,' ” she says.

Forging a friendship in the virtual classroom

Tribble and Williamson have only met in person twice but consider each other friends outside of the nursing program.

The women lean on each other for moral support as well as classroom help. They’ll text each other to make sure they understand assignments or call if they need help writing a research citation. Sometimes they have marathon speaker phone sessions before exams to review the materials and quiz each other, and they even practiced their conversational Spanish skills by phone.

Unlike the College of Nursing’s traditional programs with semester-long classes, the curriculum in the online programs is accelerated, with courses delivered in seven weeks. Although students may choose how many courses to take at one time, Williamson and Tribble elect to take the full two-course load.

Tribble says she gears herself up before each session starts, noting that she has learned, “I can do anything for seven weeks.” 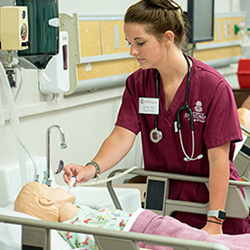