When a trio of fourth-year USC pharmacy students sought out the Palmetto Poison Center practice rotation, they had no idea the experience would lead them on a monthlong journey across the state.

But for Josh Agbunag, Beth Michaels and Jason Lockhart, talking to senior citizens in three low-income communities and stepping inside all 70 of South Carolina’s hospitals gave them a first-hand look at the state’s health disparities and how they could improve the state’s health as pharmacists. 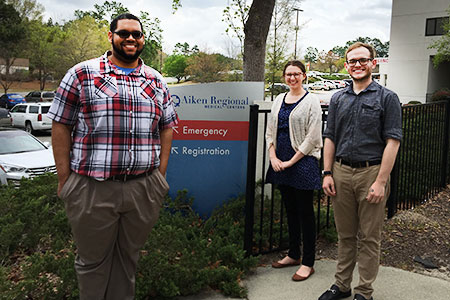 “South Carolina is very underserved,” Agbunag says. “The cities where the hospitals are, are few and far between. There are plenty of people stuck in the gaps. They have no access to health care, and it’s very eye opening.

“When you have to go through it all in a month, the differences are stark. Hilton Head vs. Allendale: it’s two different worlds, but it’s in the same state.”

During their presentations, the students talked to the seniors about taking the correct dose of medicine at the correct time, keeping medication safe from children, managing side effects and sharing information about the services provided by the poison center. They also advised the seniors to keep an up-to-date medication log — containing information about prescription drugs, over-the-counter medicines and supplements — on their person in case of an emergency.

Although the students’ presentation focused on medication safety, when they talked to the residents, they learned that drug interactions were not necessarily a concern because the patients didn’t have the medicines they needed.

In Elloree, Agbunag was approached by a gentleman who couldn’t get medicine to manage his hypertension. “He had no money, and there was only one doctor and one pharmacist in their town,” Agbunag says. “He was stuck without anything.”

And so the real learning took place.

At DeRienzo’s direction, the students made phone calls to local and state agencies to identify potential resources that could improve the seniors’ access to health providers. The students also counseled the seniors to ask their doctor about switching from brand-name to generic drugs to save money, to look for coupon cards or call the drug maker.

I learned helping people with their health care is not a science in that I can put in an input and expect a certain output. It’s very dynamic.

“The students were floored by the seniors’ needs and how difficult it was for them to access health care because they live in rural areas,” DeRienzo says.

She says they were also taken aback when many of the seniors asked for help completing a survey about the presentation because they could not read or write. These first-hand encounters with patients in underserved areas provide lasting lessons, she says.

“This experience changed my view of patient care,” Michaels says. “As pharmacists, we are taught here’s the drug, here’s what it treats, but apart from talking to people and seeing the way that people actually live their lives, you can easily tell them, ‘Well, take this and it will fix the problem,’ but for them, that might not be possible — whether it be the cost of the drug or transportation or they can’t get to a doctor so they can’t get a prescription or they’re having issues with insurance and don’t know the person to call.

“I learned helping people with their health care is not a science in that I can put in an input and expect a certain output. It’s very dynamic.”

Agbunag echoed that sentiment about what he learned.

“Being with Christina and seeing the very underprivileged people, I realized there is a large amount of that population that needs help, and I have some sort of duty to try and help them the best I can," he says. “I became a pharmacist because I want to help people. They arguably need help. Just because they can’t afford it, doesn’t mean they don’t deserve help.”

In addition to visiting senior centers in rural areas, the students also saw the challenges faced by the state’s hospitals during visits to each facility to deliver capability surveys and share poison emergency treatment guides.

The students were surprised by the efficiency at Williamsburg Regional Hospital in Kingstree, which operates out of a series of modular trailers after damage from the October 2015 flood forced the main building to close.

“From the outside, it did not look like it could be a well-functioning hospital, but on the inside, it felt like you were inside a regular hospital,” Michaels says. “That was really an interesting place to be.”

And at Allendale County Hospital, the students heard about the increasing number of heroin overdoses coming through the emergency department doors and the challenges of serving a larger rural population since the closure of neighboring hospitals in Barnwell and Bamberg counties.

The students visited the hospitals to help improve the response rate to a survey the poison center conducts periodically as part of its national accreditation process. For the survey, hospitals identify what types of trauma services they can provide, the labs they can process and the medications kept in stock by their pharmacies. This data is critical for the center’s staff when they counsel callers about whether — and where — to seek treatment.

In addition to the outreach projects, the students answered calls in the Poison Center’s call center under supervision from director Jill Michels.

The Palmetto Poison Center, which operates from the College of Pharmacy, provides free, confidential guidance about poisons to South Carolina residents and hospitals 24 hours a day. The center, run by a team of professionally trained toxicology staff, answers about 30,000 calls per year.