“Did 'Luke Cage' Break Netflix?” asked entertainment site Deadline. “'Luke Cage' is Out, But Netflix is Down,” wrote Spin. And then Esquire nailed it: “'Luke Cage' is So Great That it Broke Netflix.”

Punch “Luke Cage breaks the internet” into Google, and you’ll get a barrage of laudatory stories from October 2016, when the hit action series debuted.

Based on a fictional crime-fighting hero originally created by Marvel Comics in 1972, "Luke Cage" is just the latest in the Marvel Cinematic Universe, the media franchise responsible for blockbusters like "The Avengers," "Guardians of the Galaxy" and the "Captain America" movies. For lead actor Mike Colter, playing the titular character Luke Cage has been a breakout moment. 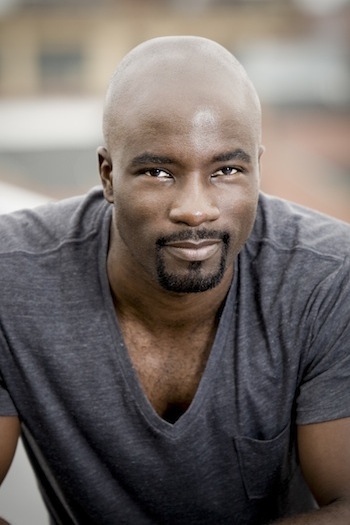 Mike Colter, a 1998 alumnus of the university's theatre program, plays the lead role in the hit Netflix series "Luke Cage."

Colter — a 1998 alumnus of the University of South Carolina's theatre program and a Columbia, S.C., native — was already successful. He’s had roles in "Million Dollar Baby" (as a boxer), "Zero Dark Thirty" (as a drug lord) and numerous other films, as well as recurring roles in the TV series "Jessica Jones" (also as Luke Cage), "Agent X" and "The Good Wife." But to carry a show on his own, he says, represents a new stage of his career.

Luke Cage is a powerful character — a thoughtful, complex icon of justice struggling to do the right thing in a neighborhood beset by problems both within and without. The pride Luke Cage exudes for his Harlem neighborhood “made him the kind of character that African-American communities could finally celebrate,” associate professor of English and African-American Studies Qiana Whitted told the Columbia, S.C. Free Times last fall.

The Netflix series has captured a particular moment in American culture, and Colter is center stage. For him, though, it’s all about the acting — not societal expectations of the character.

“I’m very good at avoiding any kind of weight that people try to place on you in terms of expectations,” he says. “I never thought about what other people in the culture would think about it, because you are never going to please everybody.”

A taste of honey

Colter fell in love with the idea of acting as a child after seeing the 1984 film "A Soldier’s Story," and Colter’s family was supportive of his aspirations. His three older siblings pursued more traditional careers, he says, which gave him some leeway to go in a different direction. In high school, he started a drama club.

Still, he wasn’t sure exactly what the path might look like. After high school he enrolled at Benedict College, but he made the leap to Carolina’s Department of Theatre and Dance at the suggestion of one of his professors, Scott Blanks.

“I knew where I wanted to be, but the logistics of it didn’t seem very clear,” he say. “I didn’t know exactly how I was going to get from point A to point B.”

What he found at Carolina was a welcoming family that gave him the chance to develop his talents.

“Getting to the University of South Carolina, and finding a department there that was willing to give me an opportunity to try this craft — to get up in front of people and to try to perform and to try to see whether it felt like I belonged — it was a very interesting experience,” Colter says. “And it was a very exciting time for me.”

“He was very responsive to directing and he was hungry to improve.”

Robert Richmond, chair of the Department of Theatre and Dance

But the first time out was hard. “I had a little part in 'A Taste of Honey,'” he says. “That was my first time performing on the mainstage at the university, and I wasn’t as comfortable in it as I wanted to be. I was a novice; I was still trying to figure things out.”

His talent was clearly there, though. Soon he took the role of the monster in 'Frankenstein,' directed by Jim O’Connor, then a professor theatre at USC. “He was very influential in getting me started and helping me do work in the theatre program,” Colter says of O’Connor, one of several mentors with whom he stays in touch.

Department chair Robert Richmond was a visiting artist in the theatre program when Colter was a student. An expert in classical repertory, Richmond directed Colter in the Greek tragedy 'Oresteia,' in which Colter played the role of King Agamemnon.

“That is how I first met him, and he was fabulous,” Richmond recalls. “It was a magical time; he made a lasting impression.” The two have remained friends since.

What Richmond remembers was a talented student with a deep, elegant voice who was determined to take his craft to the next level. “He was very responsive to directing and he was hungry to improve,” Richmond says. “He knew he had talent, but he also knew he was raw — he was sensible in knowing that he needed more training.”

For his part, Colter is grateful for the start he got at Carolina. “I would be hard pressed to find someone who was not supportive,” he says.

From stage to cage

"Frankenstein" and other mainstage roles marked a turning point. “It gave me a chance to try my craft and to work on it,” Colter says. “I didn’t take that lightly. It gave me enough confidence to continue to pursue this.”

Colter worked hard to get everything he could out of the opportunities that came his way — and to put himself in a position to get more opportunities. He went to every play he could, both on campus and off. “I was hungry for the opportunity to learn,” he says. “I was hellbent on trying to catch up on all of the things that I felt like I didn’t know about the theatre.”

After Carolina, Colter earned his MFA from the Mason Gross School of the Arts at Rutgers and then moved to Los Angeles, where he pounded the pavement for any role he could get.

“When I got out of grad school there were so many roadblocks — many more days of unemployment than employment,” he recalls. “There were times when I didn’t work for months, didn’t know when the next job was going to come. I’d have a moment where I’d have a breakthrough, and then a dry spell. All these things happen — and along the way, you also reach these moments of inspiration that tell you that it’s worth it.”

Colter still works hard, splitting his time between New York, where he films, and Los Angeles, where he lives with his wife and daughter. To students considering the theatrical life, he says follow your passion — but also know what you’re getting into.

“Art doesn’t necessarily equal commerce or money," he says. "So the percentages are against you, the odds are against you. The passion and the feeling you get from working and doing what you love — that is about all the payment you can expect.”

Today, Colter can look back with satisfaction at all that he has achieved. But as successful as he has been playing Luke Cage, Colter doesn’t see it as the endpoint of where he hopes to go. For him, it’s still about taking risks and putting everything he can into a role.

“There is always more you can do,” Colter says. “I don’t think there is any role that has been written that does everything that you could possibly do or utilizes all of your gifts as an artist. So you are always constantly looking for some other thing; it’s about stretching and finding something you can do that you didn’t think you could do or didn’t think was in you.”