The journey of our in-state rivalry

Carolina and Clemson’s rivalry is as intense as an in-state competition can be. It’s deep-rooted in history, politics and athletics with Carolina fans having a dislike for anything orange and purple. But in recent years, the rivalry has been used to encourage spirited competition to help the South Carolina community. 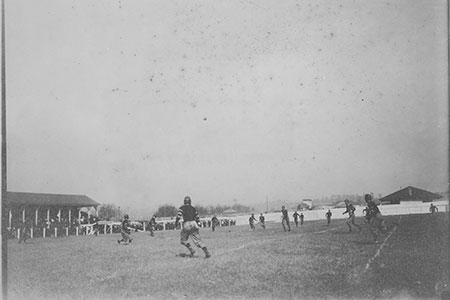 The first known photo of a Carolina-Clemson football game taken in 1909. (Photo courtesy of University Archives)

First Carolina-Clemson football game, 1896
Tension built between the two colleges was transferred into a new platform — the football field — when the first Carolina-Clemson game was played. Football was fairly new to both programs at this time and didn’t resemble what we identify as football today. Two thousand fans paid twenty-five cents to attend the game at the former fairgrounds on Elmwood Avenue in Columbia. The then Carolina “Jaguars” won 12-6.

Tigerburn, 1902
Clemson was the assumed favorite leading into the 1902 football game with an impressive record under Coach John Heisman. However, Carolina won 12-6 in an upset victory over Clemson. Carolina students celebrated the win by parading around with a sign of a gamecock crowing over a beaten tiger. Clemson cadets felt offended by the sign, and a fight broke out and the image torn down. Clemson cadets demanded the sign not be brought to the Elks parade on Main Street the next day; the Carolina students ignored that request. So 300 cadets went to campus to retrieve offending sign with rifles and bayonets. Forty Carolina students, including future UofSC president J. Rion McKissick, quickly armed themselves to defend the sign. Staff and police defused the situation, stopping a possible riot and creating a compromise to burn the sign. This event started Tigerburn and solidified the gamecock as the USC mascot. The Carolina-Clemson games the years following were canceled because of the incident. The next time the two teams played each other was in 1909. The rivalry series has been interrupted since then.

End of Big Thursday, 1959
Since the beginning, the Carolina-Clemson rivalry game was the main event for the state fair, the social event of the year for South Carolina. The football game was the headliner on Thursday during the week of the fair. After decades of the game being hosted in Columbia, Clemson requested that the game be hosted at its university every other year. This changed the game to being hosted towards the end of the season as it is today. 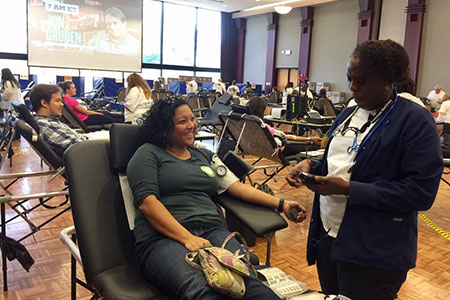 One of the ways to help in the effort to beat Clemson is to donate in the annual Carolina-Clemson blood drive.

Palmetto Bowl, 2014
The longest uninterrupted college football rivalry in the South has officially given a name to the game, The Palmetto Bowl. The winner between Carolina and Clemson walks away with a trophy to solidify its victory till next year.

Palmetto Series, 2015
The Palmetto Series is now keeping score between the universities’ athletic departments. Winners of each head-to-head competition between the two schools in multiple sports will be calculated during the academic year to determine which school received the most wins.

“The Palmetto Series was designed to be a fun and spirited competition that would bring attention to the many great sports in which South Carolina and Clemson both compete,” says Charles Bloom, executive associate director and chief of staff for the University of South Carolina Athletics Department.

There is also a point given to the school with the higher GPA of the student-athletes for the academic year. Fans can even help their university and their community by donating to the food drive. The school that collects the most donations also gets a point. The university with the most points at the end of the academic year wins the Palmetto Series.

“We wanted to communicate that while athletics is important and both schools appreciate the healthy competition — we all — including our sponsor, the South Carolina Department of Agriculture — wanted the Palmetto Series to be about more than just sports. We’re sending the message that Carolina and Clemson compete on all grounds — both on and off the field,” says Bloom.