Sitting down with the student body president 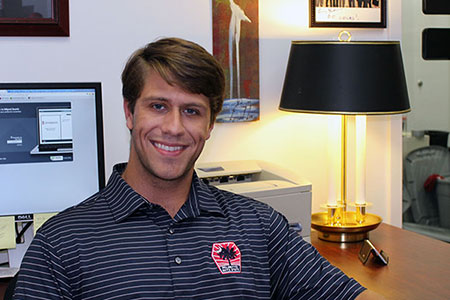 Student body president Michael Parks shares his plans and views about the progress of student government from his office.

Student body president and Lexington, S.C., native, Michael Parks, has been busy this summer working to make this school year better than the last.

“I’m excited to see the impact that our programs and our initiatives this year can make in the USC students’ daily life on this campus, but I’m also excited to see how we can invest in younger leaders on our campus and pass the torch to them when the years over,” says the senior finance major.

We sat down with Parks, and he discussed his perspective on issues affecting the school as well as his and student government’s progress and plans so far.

… on increasing the size of student government
“It’s borderline embarrassing how few students are involved, engaged or aware of what we do in student government. So we made a very diverse, big student government cabinet which is something that my staff and I manage. We created a couple new positions, secretary of veteran affairs being one of them, and we have two secretaries of athletics.”

… on the It’s On Us campaign
“It’s On Us is a program that fights against sexual assault on college campuses. Sexual assault is an issue on this campus and unfortunately just about every campus in the country. It’s On Us has been a thing at USC before, but it’s never gone big before. So that’s something that were making a priority this year.”

… on planning the homecoming concert
“We’ve gotten to a point that really the only time that our student body has a community time is just at football games. That’s it. That’s the only time were really together. So we thought, ‘What are things that bring students together?’ And it kind of came down to two things, food and music. So we’re doing this big homecoming concert partnering with Carolina Productions, and it’s going to be a huge success. I really think it is. I can’t tell you who’s going to be performing yet, but it’s going to be really fun.”

… on the MyOffCampus app
“Think about ratemyprofessors.com, which everybody uses every semester. You figure out who to take, who not to take. Imagine that for your off campus housing options, whether it be checking out different landlords that owns tons and tons of properties within a couple miles radius of the universityor looking into the reviews of off-campus complexes.”

… on Gotcha Ride
“They are these fancy golf cart looking contraptions. Gotcha is this startup that provides these cars to universities, and it’s all student-led, student-run, student drivers. They transport students from entertainment districts back to campus and vice versa on weekends. This is going to be another way for our students to take advantage of free safe transportation on the weekends.”

… on increased tuition
“It’s frustrating, but it probably is a necessary evil to continue the progress that our university system is making, not only in our state but in our country. I like to say that a tuition increase that occurred a couple of weeks ago when the board of trustees voted on it, a 3.25 percent increase, is not desirable but it’s digestible.”