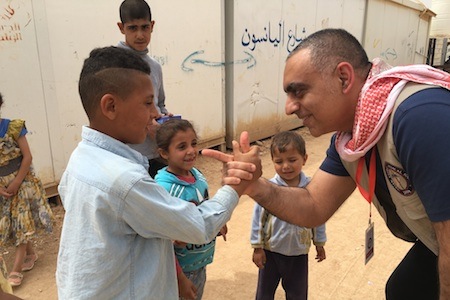 “As a physician, it is probably the most fulfilling thing I have ever done,” Moeen Saleem says of his nine-day trip in April to the Zaatari refugee camp in northern Jordan.

Prior to an April trip to a refugee camp in Jordan, Moeen Saleem had never done international relief work. But after what he saw on that trip, the Chicago-based cardiologist — a 1995 graduate of the School of Medicine — says he’s ready to go back and hopes other medical professionals will think about going, too.

“As a physician, it is probably the most fulfilling thing I have ever done,” Saleem says of his nine-day trip to the Zaatari refugee camp in northern Jordan, where 80,000 people displaced from the Syrian conflict now live. “I got more from the refugees than I gave back to them.”

The trip was heartbreaking, uplifting and enlightening, as Saleem saw hundreds of people whose lives have been completely upended by the tragedy across the border.

“What we saw a lot in our clinics was a lot of poorly controlled diabetes because the food supply is a heavily carbohydrate diet, and children who are malnourished; they look 7 or 8 but they are 10 or 11,” Saleem says. “And from an education standpoint, the children are typically two to three years behind where they should be. You have a whole generation that is malnourished and not able to receive proper education.”

Saleem was recruited for the trip by a pediatrician friend who was organizing a trip for the Syrian American Medical Society, or SAMS Foundation. Saleem is not Syrian (he was born in Canada to Pakistani parents), but he was interested in learning more.

“He just casually asked me if I was interested; they were looking for all kinds of specialties,” Saleem says. “The next thing I knew he was sending dates.”

As health care providers, we can go anywhere and help anybody. Whether you go work in a free clinic or overseas, your skill set is universal.

The result was a 60-person team traveling to the camp — the largest such group that SAMS had put together, Saleem says.

“It’s a nonreligious, nonprofit organization,” Saleem says. “What I really liked about it was there were people from all over the world, different religious backgrounds, Muslims, Christians, Jews and Hindus; an international coalition of people coming together to help in this humanitarian crisis.”

More than 600,000 refugees from the Syrian conflict have landed in Jordan, and that’s just those who are officially registered with the U.N.; unofficial estimates are closer to 1 million. The Syrian conflict, which began in 2011, has produced 4.8 million refugees outside the borders from a country whose total population was 23 million before the civil war began. Roughly 6.5 million more have been displaced within the country. 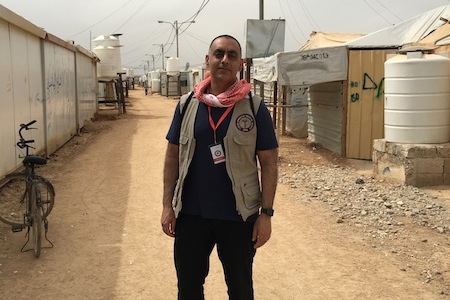 “You walk in a room and before you even say anything they are expressing this incredible gratitude for you being there,” Saleem ssays of his trip to Jordan to help Syrian refugees. “It is very humbling.”

The experience of working in the Zaatari refugee camp is one that puts the typical Western lifestyle in perspective, Saleem says.

"You are leaving the U.S. — which is the greatest country in the world, with amazing resources for anything you can imagine — and then you go to a place where people are generally living in pure survival mode, just trying to make ends meet,” Saleem reflects. “You leave First World problems and you arrive to a community of people who, until they were displaced, were living lives like ours: They were engineers, teachers. They have lost their homes and family members. The common thing that everybody reflected on was that it was a way to reset your perspective on life.”

The spirit of the people he encountered was humbling, Saleem says.

“You walk in a room and before you even say anything they are expressing this incredible gratitude for you being there,” he says. “It is very humbling. They first thing they will say is God bless you, thank you for being here, thank you for remembering us.”

In some ways, Saleem says, the problems he saw seemed overwhelming. In Chicago, his specialty is cardiac electrophysiology; in Jordan, though, he served as a general cardiologist because the limited resources available essentially dictated that he treat a broad range of heart problems.

“In six days, we saw 6,000 patients and performed close to 40 cardiac interventions,” Saleem says. “It seems like a big accomplishment — but when you put it in the context of so many people, it feels like a drop in the bucket.”

There’s also a nagging feeling of guilt about the inability to do more, he says. For patients with serious conditions, doctors would leave notes with the local SAMS Foundation office about needed follow-up. But there are questions about how much follow-up can actually be performed given the limited number of medical personnel, limited resources and patients who might move on to another area. And in some cases, like cancer, Saleem says the outlook is dire.

“There were other physicians who were diagnosing cancer, and they were like, ‘There is nothing we can do,’ ” he says. “In the United States, the patient would have immediate access to specialty care,” he says, but at the refugee camp, “the diagnosis might have a terminal prognosis. For cancer, it just requires more care — and the resources are incredibly limited.”

To help process his own experiences and emotions, Saleem started writing about them on his Facebook page.

“I would come back from working in the day, and I would have all these stories — stories of people who had lost family members, or they don’t know where family members are, or they have disabled family members they are trying to care for,” he says. “You come back to your hotel, and you can’t shut your mind off.”

He wrote was about a 4-year-old with a serious cardiac arrhythmia condition — so serious that the boy’s two older brothers died from it. There is a medication to treat the condition, but the boy’s father was having trouble getting it.

“In any other country — or if he didn't have to live as a refugee — he would never have to worry about running out of meds,” Saleem wrote. “The thought of this boy getting lost in the shuffle had me choking back tears.” Saleem wrote a prescription in an effort to ensure the boy will have what he needs.

Another patient was an 18-year-old with a fast heart rate. The young man had already been put on medication, but Saleem determined that the patient’s heart rate was probably due to anxiety, not any type of heart condition. “I could see the look of relief on his face,” Saleem says. “The last thing an 18-year-old needs is to think he has a cardiac condition.”

Talking about chronicling his experiences on Facebook, Saleem says he wants to keep the focus on those living in the camp. “What I wanted to share on Facebook was not for me to receive personal credit but rather to share their stories — it reinforced what we were trying to do as a team,” he says. “This is what is happening in the world; anybody who takes the time to listen is helpful in its own way.”

It's been two decades since Saleem's time at the School of Medicine, but he credits his time there as a "rite of passage to a special calling." He points out that part of the School of Medicine's mission is to provide care in underserved areas — and that those areas can be local or halfway across the world. Saleem's father was also a physician, serving as a role model as he provided charitable care to members of the community.

Having seen the depth of the need of Syrian refugees, Saleem is ready to go back when he can — and he hopes others will hear the call and respond, too.

“It’s not about me personally — it’s a reminder that as health care providers, we can go anywhere and help anybody. Whether you go work in a free clinic or overseas, your skill set is universal. You have the skills to help locally or to go globally and help out in a humanitarian crisis.”