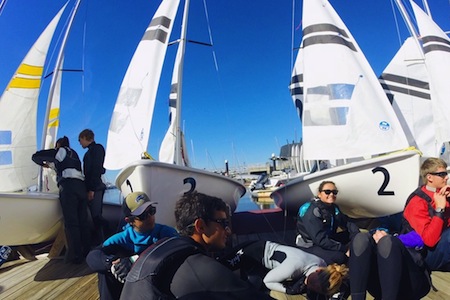 Five years ago, there was no Gamecock Sailing Club — or, to be more precise, there was a long-dormant club just starting to reawaken. Today, there’s an active club comprised of two race teams and up to 80-plus members during any given semester. Meanwhile, the club’s president, a senior finance major who graduates this week, hopes to turn her passion into a career in the sailing industry.

Like sailing itself, the story of how the club went from moribund to thriving is one of perseverance and teamwork.

A few years ago, several students approached Roger Dougal, an avid sailor and chair of the electrical engineering department in the College of Engineering and Computing, and asked for his help in reviving the club.

“A few students were interested in resurrecting the club, and they wanted me to be the adviser,” says Dougal, who has been sailing competitively for a quarter-century. “I told them I didn’t have time, but they eventually talked me into it.”

Between Dougal and a hardcore group of committed students, the revived Gamecock Sailing Club — which had last been active around 2000 — was reborn.

That’s where Kate O’Donnell, a Connecticut native and outgoing president of the club, comes into the picture. She came across the club at the Student Organization Fair in 2012 during the spring of her freshman year, just as it was relaunching.

“When I became part of the club, we had 10 or 12 of us total and they had already gotten in touch with Roger,” she says. “He’s incredible.”

At the time, the club’s student leader — called “commodore” — was Laura Kubic. After her came Rachel Van Zile, then Katherine Stewart. After a stint as treasurer, it was O’Donnell’s turn to be commodore. Rising junior Jack Gonzales will take the helm after O’Donnell graduates this week.

“We couldn’t do any of this without them,” O’Donnell says. “When I started here, we didn’t have any boats to work with. So we just went sailing whenever anyone was willing to take us out.”

Initially, the club was, well, just that — a like-minded group of people interested in sailing. In the spring of O’Donnell’s sophomore year, however, the group changed its official classification from student organization to sports club, “which lets us get more recognition as a sports team,” O’Donnell says. “When we did that, we also joined the Inter-collegiate Sailing Association."

“When I started here, we didn’t have any boats to work with. So we just went sailing whenever anyone was willing to take us out.”

It was a sign that things were getting more serious.

“That’s really when we started to step things up,” O’Donnell says. “We were invited to an invitational the spring of my sophomore year out at Vanderbilt. That really kickstarted it for us. It was like, ‘Wow, there is this whole conference, this whole system set up for collegiate competitive sailing.’ And we really wanted in.”

Today, the Gamecock Sailing Club has a dinghy (small boat) team that competes in both co-ed and women’s regattas and other races. Starting last fall, the dinghy team has been volunteer coached by David Van Cleef.

“He put in a ton of time to help us out,” O’Donnell says. “Being able to hold more structured practices has really helped us, because we can focus a little less on teaching each other and a little more on learning ourselves. Before that we were self-coached.”

More recently, the club has also started a keelboat team.

Even as the club has morphed into a competitive entity, there is still plenty of room for those who are just starting out or who love to sail but don’t ever want to compete.

“Some people come in having sailed all four years of high school on their high school’s team, and other people come in and have never been on a sailboat before,” says Gonzales, a marine science sophomore who grew up sailing with his father in Charleston.

Asked whether there is competition among club members to make the teams, Gonzales says no.

“It kind of weeds itself out,” he says. “Some people join the team and then realize they don’t really have the time for it, or for whatever reason they just don’t want to come as much. And then not everyone is into the competitive aspect of it; a lot of them just want to go sailing for a day, cruise around and not do all the racing.”

It doesn’t take long for those who want to race to get up to speed quickly.

“I think the coolest part of that is you can come in having known nothing and become very competitive very quickly,” O’Donnell says. “One of our girls who crews for us had actually never sailed before August and has been a consistent crew member for our A and B fleet all year long. It’s cool the way that opportunity presents itself.”

O’Donnell is hoping opportunity will come her way, too.

“I’ve decided to pursue a career path within the sailing industry, primarily because of my experience with the club,” she says. “It works well for me, because that’s what I do every day.”